Anti-Zionism Is About Dignity for All Peoples: A Response to ADL’s Jonathan Greenblatt 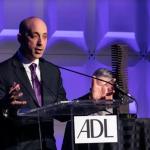 Jonathan Greenblatt, the ADL's CEO, in a speech just given to the ADL Virtual Leadership Summit, proclaims, among many other falsehoods, that anti-Zionism is "predicated on the negation of another people" and devotes considerable time to attacking organizations that are committed to Palestinian justice. His speech was grounded in extreme defamation, in a blatant distortion of history, and in a breath-taking lack of any moral compass.

He is a propagandist for the Israeli state, as is the organization he leads, and he chooses his words deliberately; in the way someone does whose job it is to promote Israeli (propaganda).

Sometimes the word can be overused but there is no better word for Mr. Greenblatt's remarks than that they are a shande, a disgrace. Before I explain why, I'd like to share what came to mind when reading his comments.

I grew up with a father who was the most ethical human being I knew. He was a proud and knowledgeable and loving Jew and was a deeply caring soul who made everyone around him feel special. He taught me to always love who I was but to never think I was better than any other person or community. He taught me by his example that being Jewish meant always speaking the truth and following my heart in the search for justice. He didn't just preach goodness; he embodied it. He represented to me that which I loved about being Jewish. Reading Greenblatt's speech, I immediately thought to myself—this man reflects the opposite of all my father taught me about what it means to embody the best of our tradition and values. His attacks are disingenuous and dangerous. They lack humanity.

Greenblatt knows his attacks on organizations like Jewish Voice for Peace (JVP), Students for Justice in Palestine (SJP), and the Council on American Islamic Relations (CAIR) are baseless and wrong. He is a propagandist for the Israeli state, as is the organization he leads, and he chooses his words deliberately; in the way someone does whose job it is to promote Israeli (propaganda). I know that because, as a young "socialist Zionist" activist over 45 years ago, I attended such sessions in which I was encouraged not to speak the truth but, rather, to aim to discredit seekers of Palestinian justice by accusing them of antisemitism.

No organization is beyond critique, of course, but anyone who has taken the time to learn what these organizations are about or who have spent time with members of JVP or SJP or CAIR—or who has gone to an organizing or planning meeting—knows that these are seekers of justice. Each of these organizations is devoted to making the world a better place, to insuring that all people are treated with the dignity they deserve. To suggest otherwise is only a desperate attempt to reify apartheid and injustice, as Greenblatt and the ADL do with such fervor.

Perhaps most slanderous, though it's hard to say which of his falsehoods is worse, Greenblatt accuses these organizations of "regularly denigrating and dehumanizing Jews." But he has no examples of that because it is a vicious lie. And he knows it. In a particularly shameful manner, Greenblatt attacks and grossly distorts the words and sentiments of a young Palestinian poet, Mohammed El-Kurd, who has courageously and with tremendous integrity devoted his life to pursuing justice for his family and for his people. That alone should make Greenblatt bow his head in utter shame.

We must remember that Greenblatt not only denies the reality of the Nakba but actively supports Israel as it continues to violently steal Palestinian land, to force Palestinians out of their homes, and to deny Palestinians refugees the right to return home. Amnesty International's 2022 report, Israel's Apartheid against Palestinians: Cruel System of Domination and Crime against Humanity put it directly: "Israel has established and maintained an institutionalized regime of oppression and domination of the Palestinian population for the benefit of Jewish Israelis – a system of apartheid – wherever it has exercised control over Palestinians' lives since 1948. Even before it was released, Greenblatt dismissed the report on the grounds that it could lead to antisemitism. He expressed not even an ounce of soul-searching.

At a time when we must all be concerned with the rise of white nationalism, which means that so many of our communities are being targeted, Greenblatt spends inordinate time attacking supporters of justice for the Palestinian people. While we need to challenge antisemitism as part of a broader commitment to collective liberation, Greenblatt and the ADL are doing just the opposite. Greenblatt tries in his speech to undermine and discredit the legitimacy of the powerful #DropTheADL campaign, but over 200 social justice organizations--and the list is growing--explain in exquisite detail why the ADL is not a civil rights organization and why it has been and continues to be deeply harmful to our communities and movements.

[Donna Nevel is a community psychologist, educator, and long-time organizer for justice.]