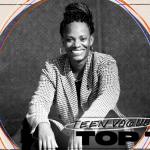 The 2022 midterm elections are right around the corner. In our new series Teen Vogue’s Top 10, we’re asking candidates 10 questions about the issues we know our readers care about the most, including student debt and climate change — plus a few bonus ones for fun.

Summer Lee, a Pennsylvania congressional candidate, has won endorsements from pretty much every progressive in Congress, from Senator Bernie Sanders to the members of the Squad, as well as youth climate organizations such as the Sunrise Movement and Zero Hour. Lee speaks to us about the need to “fundamentally change the entire way we do politics,” how young people are the “moral compass” of the Democratic Party, and her “menace” teenage self.

1. How are you engaging young people in your campaign?

We are doing it the same way we've been doing for the last few years in Western Pennsylvania. We've built a movement that's powered by young people, Black and brown people, working-class people — all the people who have watched their lives and livelihoods get ignored for the sake of corporate profits. I am so proud of our Students for Summer group, who have led the charge organizing students at colleges and high schools in their district, leading volunteer shifts, canvassing across campuses, building a movement in their own communities to deliver the future they know they deserve. That's how we're really engaging young people — by letting them lead this campaign where they need it to go.

2. If you could snap your fingers and change two things about politics in the United States, what would they be?

Alright, big ask, but maybe just fundamentally change the entire way we do politics? Sounds hard, but it's really two simple things. We have an overcomplicated, inaccessible political system that was built that way on purpose. Our goal should always be how we can get more people involved, more people to vote, more people a platform to have their voices heard about what matters to them.

And that leads to the second thing. We have a system where the worst possible interests have the most influence and power. We can build grassroots movements that bring in people from every corner of our district, and a corporate PAC or a few billionaires can come in and toss a few million dollars to silence a movement. Our elections and our politics are not being run by or for people, they are being run by and for corporate power. If we want to actually have a democracy, then only the people should have power in our politics.

3. What’s one piece of advice you’d give your teenage self?

I wouldn’t talk to my teenage self — she was a menace. Lol, jk. I would probably say, “Keep on talking. Don’t let them tell you to shut up, boo.”

4. What specific actions would you take on the climate crisis if you’re elected to office?

Growing up in the Mon Valley, we could wake up any day with the worst quality air in the country. Our story is the story of so many communities suffering from environmental racism, used as dumping grounds by corporate polluters who sacrificed our health for their profits. We can’t even depend on clean air and water in this district.

That’s why I have always been a champion for a Green New Deal and a just transition for our communities. This district, Allegheny and Westmoreland Counties, can be the model for the future of our climate and labor movement. We’ve seen what happens when we let corporations dictate our economies. It’s working families that are left behind. There is no future in fossil fuels, not for our planet and not for any industry. No matter how much planet-destroying drilling and fracking you do, those fossil fuels will run out. We can either be leaders in the movement toward 100% renewable energy, pass a Green New Deal, and create millions of green union jobs and infrastructure investment here — or we can be left behind again.

Taking on this climate crisis can only succeed if our labor movement and climate justice work together to build a green future and hold fossil fuel corporations accountable. That’s the movement this campaign is building, because our planet can't survive without it.

5. In 2020, young voters turned out in huge numbers for Democrats. They then pushed lawmakers to stay accountable to their campaign promises, many of which didn’t come to pass. Why should young people remain engaged in 2022?

It is absolutely understandable that young people feel disillusioned with electoral politics right now. Our party has not lived up to so many of the promises we made to young Black, brown, or working-class voters. What we’ve seen is the continued power of corporations to exert their influence over our politics, policies, and politicians. The Democratic Party is negotiating against itself in Congress because of a handful of right-wing, corporate-backed politicians who would rather see children starve than agree to extending the child tax credit.

Electoral politics is not the totality of our political power. The movements built and led by young people — be it for climate justice or racial equity — are the engines behind the Democratic Party. They are our moral compass, always tuned to the needs of the people. But the truth is, congressional inaction despite Democratic majorities proves we don’t just need to elect Democrats — we need to elect better Democrats. We need the kind of leaders that are accountable to these movements instead of their corporate donors’ checks.

I understand the disillusionment on a personal level too. Black women are constantly being told they’re underqualified and too demanding when we want to run to represent our party in office — the party we carry on our backs every election cycle. I am running as the only elected Democrat in this race, and still local establishment leaders refuse to embrace our movement and campaign — a campaign led by a young, Black, working-class woman who is saddled with student debt and about to get her reproductive rights taken away by the Supreme Court.

There are people in power that want us to feel demoralized and helpless. But if movements like Sunrise and the labor movement have shown us anything, it’s that organizing works, and that no matter how many setbacks, the power of the people is always stronger than the people in power.

6. Name one public figure you admire and why.

I try not to evangelize any public figures because it’s never one person; it’s the movement behind them.

7. What is your plan for addressing the student debt crisis?

Canceling it. All of it. Every decision I make is a decision shaped by the thousands of student debt I carry because I had the audacity to pursue a higher education. President Biden can cancel all student debt with a stroke of the pen, and he should.

And if we don't want folks to get saddled with debt in the first place, then we need to ensure all public colleges, universities, and vocational programs are tuition-free. Poverty is a policy choice.

8. What is your stance on reducing funding for police departments and the term “defund the police”?

Public safety does not begin with policing. It begins with investment into divested communities where everything but police budgets have been defunded: education, infrastructure, good-paying job opportunities, transportation, housing, health care. Our public safety starts with keeping our public safe in their everyday lives. So no, I don’t think our police departments need millions of new dollars every year in their budgets. I do think Black, brown, and working-class communities need that funding to exist, to survive, and thrive. There’s a reason poverty and crime are always so inextricably linked: Policing and mass incarceration are just Band-Aids until we get serious about actually lifting all our communities up out of poverty and giving them the resources every community needs to thrive.

General Hospital… I love my stories.

10. What letter grade would you give Joe Biden’s performance in office? Why?

I would give Joe Biden a B. There’s a vision he put forward, shaped and championed by movements to deliver on some of our most pressing economic, climate, health care, housing, and immigration needs. If passed they would be some of the most historic investments in working people this country has ever seen. But that vision, the full Build Back Better agenda, has not passed because a handful of right-wing Democrats, from Joe Manchin and Kyrsten Sinema to Josh Gottheimer and Henry Cuellar, have stood in its way, and our party’s leadership has let them. We cannot continue to coddle and embrace Democrats who refuse to champion Democratic needs for working families. As a party, we should always be asking ourselves: What more can we do to help the people who are struggling? Instead, we’ve let corporate politicians dictate policymaking that does the bare minimum for our communities.

Sign up to have the Teen Vogue newsletter of your choice delivered to your inbox.