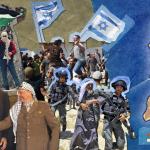 Dalia is a wispy eight-year old with a brushed-back ponytail whose heart-melting smile reveals terrible teeth. When she wasn’t proudly handing out cookies to guests, she cuddled with her dad, Nasser Nawaja, through his lecture on a sweltering Saturday in the Palestinian village of Sussia.

Dalia is clearly comfortable hosting visitors. The scrap of land in the South Hebron Hills has gained attention in recent years for the partly-successful international campaign to stave off what would have been yet another demolition in Sussia’s long history of destruction and dislocation since 1986.

But when a threat recedes in one place it crops up in another: a few kilometers away lies Masafer Yatta, or "Firing Zone 918," where a smattering of Palestinian villages and approximately 1400 people have been have been fighting in court to keep their homes since the late 1990s. In May, Israel’s High Court ruled against them, clearing the way for expulsion.

These territorial struggles represent the fine-grain detail of life under occupation, but the big picture is Area C. This region represents every layer of the conflict: The front-line political struggle between Israeli annexation and Palestinian self-determination, the tortured inequality and frequent violence in daily life. And, most recently, Area C has become the new front in the war over truth.

The geopolitical designations A, B and C are, well, the ABCs of the post-Oslo era in the West Bank. According to the 1995 Oslo II agreement, Area A is governed by Palestinian civil and security control – fragments on the map totaling about 18 percent of the West Bank, where the large Palestinian cities and the bulk of the population are located. Area B falls under Palestinian Authority control for civil affairs, but Israeli military control.

Area C sprawls over roughly 60 percent of the West Bank, with a thick north-south band along the Jordan River, an unruly length along the Green Line and tangled east-west "C" regions connecting everything. C looks like a cocoon for the future Palestinian state, but acts like a straitjacket.

All Israeli settlements are located here, with about 450,000 settlers (not including East Jerusalem, which is annexed to Israel and therefore not included in A, B and C); in Area C Israel’s army controls all civil and military affairs – in other words, Israel controls C completely.

The political struggle is the top layer of the big picture. In December 2012, Naftali Bennett, then the new leader of the Jewish Home party, presented his big plan: Annex Area C.

His YouTube video explains Areas A, B, and C, incorrectly depicting each one as nearly equal in size. The narrator explains that Palestinians control A and B (disregarding Israel’s military control over Area B). Area C, falsely portrayed in the video as roughly one-third of the territory, is under Israeli control – therefore annexation makes sense. The video is helpfully subtitled into Arabic.

Israel’s right wing had already openly embraced the idea by then. Tzipi Hotovely of Likud called to annex Area C back in 2010 and again as deputy foreign minister in 2015, to a rising chorus of settler support for annexation of Judea and Samaria in general. Benjamin Netanyahu declared his support for formal sovereignty over settlements in April 2019, for the Jordan Valley in September that year, and for large portions of Area C again via the Trump peace plan in 2020. Netanyahu suspended plans for de jure annexation in return for the normalization accord with the UAE signed that year.

This open commitment to annexation for years should remove any lingering illusion that Israel’s right-wing political leadership supports a two state solution: Carving Area C out of the West Bank would leave a Palestinian state looking not even like Swiss cheese, but a cut-out paper snowflake with precious little snow.

The Abraham Accords kicked de jure annexation off the agenda for now, but on the ground itself, Israel’s physical annexation long preceded Netanyahu, and continues unabated. In visible and less obvious ways, Israel does everything to anchor its control and make life untenable for Palestinians in Area C, presumably hoping they’ll conveniently remove themselves to slivers of Areas A and B.

By 2013, a policy brief by the European Parliament reported alarming acceleration of demolitions of "houses, shelters, schools, clinics" – perhaps including a shortage of dentists – "water wells, cisterns, playgrounds, mosques." Hundreds of demolitions each year led to many hundreds Palestinians displaced annually, the report stated.

These trends have only worsened since then, says Alon Cohen-Lifshitz of Bimkom, a human rights NGO focused on spatial planning in Israel and in the occupied territories. Once, demolition orders were issued weeks in advance of being carried out, allowing residents time to appeal; now they are served just days ahead.

In Sussia, Nawaja relates that the orders might be delivered on a Thursday, just as Israeli administration offices close for the weekend, for demolition on Sunday. Cohen-Lifshitz explains that a single order can cover numerous structures. He reported a new practice for "mobile" structures: the IDF dismantles them, and serves the order afterwards.

These structures are built illegally – without permits – because Palestinians simply can’t get permits. From 2009-2018, the Civil Administration approved 98 Palestinian building permits, out of nearly 4500 requests. In contrast, in 2019 and 2020 alone, about 18,000 settlement-related permit requests were approved, according to Peace Now and Bimkom, based on data from the Civil Administration. Bimkom found that of 1065 Palestinian applications in the same time, just seven were approved.

The planning committees (under Israel’s Civil Administration, which comes under the aegis of the Ministry of Defense) do not include any Palestinians. In 2014, petitioners asked the High Court to restore Palestinian representation canceled decades earlier; in 2015, the High Court rejected the petition.

The IDF also declares massive swathes of land to be "closed firing zones" (like Masafer Yatta), or state-owned land, zoned for Israeli use – for settlements, but also for parks, and a more recent push for settlement agriculture. The most aggressive of the settlers regularly use raw violence to keep Palestinians from accessing their land, or for general harassment; while settlers and their land grabs are backed by the IDF.

Only 0.5 percent of Area C is allotted for Palestinian development, according to Cohen-Lifshitz. The current Israeli government has made a show of plans to permit new Palestinian housing units – but the big picture remains. In May, among frantic efforts to salvage the coalition by mollifying the most right-wing members, the planning committee approved over 4000 new settler housing units.

For Palestinians, nearly all construction in these villages is deemed illegal by the Civil Administration, meaning they can’t access normal electricity, infrastructure or, the ultimate prize, water.

Yet pipes crisscross the land, connecting settler outposts like Avigayil to freshly-painted (blue and white) water stations of Israel’s national water company while skipping past Palestinian villages. Some Palestinians erect solar-powered pumps to access well-water or improvised pipes – and then the IDF destroys them. Some pay exorbitant fees for tanker water instead, while a big sign near Ma’on – by all accounts one of the most violent settler outposts – points to a "cherry plantation."

Between being squeezed off their land, the constant threat of demolition or expulsion, starved of water, vulnerable to rising, brazen settler violence and tired of fighting just to survive, many leave for Palestinian cities or towns – Areas A or B – serving the overarching Israeli political aim: the fewest possible number of Palestinians in Area C.

But proof of Area C’s towering importance to Israel is the psychological warfare, in recent years, over the truth itself. The most bitterly fought aspects of the Israeli Palestinian conflict have always been subject to manipulation of "narrative." Lately, Israel’s narrative is that Area C is threatened by – wait for it – a Palestinian takeover.

This is worse than bygone quibbles over details. One such detail was the argument that Israeli settlements were all located in large blocs in Area C adjacent to Israel. Therefore, in that argument, settlement expansion in those areas wasn’t a problem, the "blocs" could simply be awarded to Israel in a peace agreement, and the rest of Area C was fully available for a future Palestinian state. Netanyahu’s 2019 annexation plan put a spotlight on the 30 settlements, 18 outposts, and nearly 13,000 settlers in the Jordan Valley, which ought to have dispelled the myth of neatly contained settlement geography.

Demography is another longtime battleground for the truth. Right-wingers insist that there are hardly any Palestinians in Area C, to argue the logic of Israel’s permanent ownership. Bennett’s 2012 video asserted that a paltry 48,000 Palestinians live there.

The most serious, field-based study by a UN humanitarian agency counted just under 300,000 in 2013. Btselem cites 180-300,000, and the Palestinian Bureau of Statistics estimates even more. To be sure, no one knows how many Palestinians have left, but natural population growth could offset any decline. The credible Palestinian population sources are not updated, and Bennett gave no source at all.

Pulling these threads together, the new Israeli narrative wants to own the big picture. In 2019, Gideon Saar (then still in Likud) told Israeli radio: "Illegal Palestinian construction in Area C is going wild, with European financing, and the aim of the construction is to try and suffocate settlements and take over the land – we need to fight over this."

Bennett’s own 2019 election manifesto explicitly promised to annex the whole of Area C to put it under Israeli sovereignty. In 2020, as Defense Minister, Bennett announced a "battle" for the future of Area C, to be formally managed within the Defense Ministry.

This January, following haranguing by far-right wing groups, the Knesset’s Security and Foreign Affairs committee held a discussion on "illegal Palestinian construction" and "lack of enforcement” by the Civil Administration – a shameless reversal of the truth. That didn't stop the heads of the Knesset’s Land of Israel caucus from accusing Bennett of actively assisting "the Palestinian Authority’s plan to take over areas of Judea and Samaria [the West Bank]."

Nasser Nawaja has been fighting to stay in his home since he was first displaced from the original Palestinian Sussia, in 1986 – he was three years old. At eight, his daughter is already learning how to plead the case to visitors. It’s hard to fight a juggernaut; but the fight isn’t over. Knowing and maintaining the truth is a start.

[Dahlia Scheindlin is a political scientist and public opinion expert, and a policy fellow at The Century Foundation. Twitter: @dahliasc ]