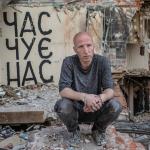 Gamlet Zinkivskyi grew up speaking Russian in the city of Kharkiv, just like his parents. But when Vladimir Putin launched the invasion of Ukraine on 24 February, it was the final push for him to switch fully to Ukrainian.

“Unfortunately, I grew up speaking Russian, but it’s not pleasant to speak the same language as the army that is destroying whole areas of our country,” said Zinkivskyi, a 35-year-old street artist widely known to Kharkiv residents, who usually refer to him by his first name.

The switch of language is part of a broader journey towards a more pronounced Ukrainian identity for Zinkivskyi, something shared by many in the largely Russian-speaking areas of east and south Ukraine. It is a process which has become more pronounced in the past three months, but it has been brewing for some years.

As a young artist, Zinkivskyi had a longstanding dream: an exhibition in Moscow. Kharkiv is just a few dozen miles from the border with Russia and has long been almost entirely Russian-speaking. Culturally, Moscow felt like the centre of the universe. But when Zinkivskyi finally made it to a gallery there in 2012, he was horrified. “They were obnoxious and patronising about Kharkiv and Ukraine, and frankly I thought: fuck them,” he said. He returned to Kharkiv and became more focused on the Ukrainian art scene.

After the annexation of Crimea, in 2014, Zinkivskyi started trying to speak some Ukrainian with a few friends. Now he has fully switched, and for the first time is also introducing political and patriotic themes into his art.

The language issue is something that comes up again and again in Kharkiv. Oleksandra Panchenko, a 22-year-old interior designer, said that since 2014 she had been trying hard to improve her Ukrainian, but conceded that she still often speaks Russian with friends.

Back in 2014, there were separatist rumblings in Kharkiv, with some people looking to the swift annexation of Crimea and wondering if all of eastern Ukraine might not be better off inside Russia. But eight years of observing the miserable conditions in the Russian proxy states of Donetsk and Luhansk dampened those feelings, and Russia’s invasion has almost entirely extinguished them.

Panchenko, who has painted her nails blue and yellow and describes herself as a staunch patriot, made a guess at the political allegiances of Kharkiv residents before the war, based on her broad circle of acquaintances. About 10% of the city used to be what are disparagingly known as vatniki – aggressively pro-Russian – she said. She described 30% as being like her, “Ukraine, Ukraine, Ukraine”, and 50% were “neutral – they felt Ukrainian but not that strongly”.

Russia’s war on Ukraine has pushed people in this neutral category more firmly into the patriotic camp, creating a much broader and more passionate pro-Ukrainian base than ever existed previously, particularly in the east of the country.

“There were a lot of neutral people here, but as soon as it came to the war, a lot of them decided to fight,” said Vsevolod Kozhemyako, a businessman who runs an agricultural company and once featured on the Forbes list of the 100 richest Ukrainians.

Kozhemyako was skiing in Europe when the war began, and left his family to return to Ukraine and set up a volunteer battalion. His unit has been based close to the frontline outside Kharkiv, in settlements that have come under relentless Russian fire.

Three out of four of Kozhemyako’s grandparents were Russian, and during the Soviet era his passport listed his nationality as Russian. However, he said that ever since the Orange Revolution of 2004 he had been a strong Ukrainian patriot and rejected the influence of Russia in Ukraine.

“Russians and Ukrainians are absolutely different. I am Russian-speaking, I think in Russian and I have three-quarter Russian blood, but the part of Ukrainian blood in me made its mark,” he said in an interview in Kharkiv city centre, where he now allows himself the occasional day away from his unit.

Kozhemyako and Zinkivskyi are old acquaintances, and when the artist told the businessman he wanted to sign up, Kozhemyako welcomed him to the battalion, but told him he should fight with a paintbrush and not a gun. Since then, Zinkivskyi has been busy painting slogans on buildings damaged by Russian missiles. He also crossed out the street signs on Pushkin Street and renamed it English Street, which he says is recognition of British military support for Ukraine.

“Gamlet is very patriotic and his works are quite philosophical,” said Kozhemyako. “They make people think in the direction of a new Ukraine. This is very important, especially now.”

The geographical and cultural variations inside Ukraine were one of the reasons why Putin and other Russian leaders tried to claim the country was an artificial construct. Instead, they now find their bloody invasion has done more than anything to bring the different parts of Ukraine together under a common identity, in opposition to Moscow.

The Russian invasion has simultaneously given those who might be neutral in their allegiances a stark choice about what kind of country they want to identify with, and provided a rallying point that allows for a broad and inclusive idea of what it means to be a Ukrainian patriot.

In the early days of the war, Ukraine’s president, Volodymyr Zelenskiy, passed a decree banning the activities of a number of pro-Russian parties, and the country’s most notorious pro-Russian politician, Viktor Medvedchuk, was arrested.

Medvedchuk, whose daughter is Putin’s goddaughter, has long been seen as Putin’s man in Kyiv. But even some of his close associates have rebranded themselves as patriots in the wake of the invasion.

Yuriy Zagorodny, a member of parliament, had been at Medvedchuk’s side since they both worked in the administration of former president Leonid Kuchma in the early 2000s. However, he said, he made a decision in the early days of the war that his relationship with Medvedchuk was over. “Ukraine is my homeland, Russia is an aggressor and Putin is the main criminal of the 21st century,” he said in an interview in Kyiv, employing dramatically different rhetoric to what he had used during a previous interview in mid-February.

Zagorodny said he had joined the territorial defence unit in his home town, south of Kyiv, in the first days of the war. He had spent some nights on a checkpoint and other days overseeing the construction of trenches.

He said he had spent hours checking the documents of drivers of passing cars; then when he had to travel to Kyiv for parliamentary sittings, he was stopped at another checkpoint, where the men pulled him out of the car and subjected him to verbal abuse when they saw he was an MP from Medvedchuk’s party. He assured the men he was a firm patriot. “I do have a feeling of guilt, but what we wanted was peaceful coexistence between the countries. Of course, now, that’s all over,” said Zagorodny.

“Changing shoes in mid-air” is the Ukrainian expression for this kind of rapid transformation in views to fit in with the prevailing climate, but for all that there may be cynical self-preservation at work, there is also a sense that people have had to make a choice: either come down on the side of a Ukraine that is fighting for the right to exist, or on that of a Russia that launches missiles and bombs on sleeping cities, and where freedom of expression is no longer legal.

For many, it is an easy choice, and by launching the attack on Ukraine in the way he did, Putin has deprived Russia of many of its natural supporters in the country. 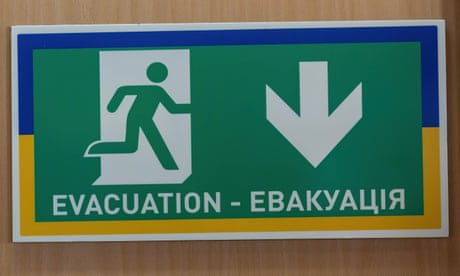 ‘Ukrainian has become a symbol’: interest in language spikes amid Russia invasion

“My 11-year old nephew talks about ‘Putler’ – a mix of Putin and Hitler. He will spend his whole life hating Russia, and his children will too. Maybe in several generations that will change, but not sooner than that,” said Zagorodny.

In the port of Odesa, the mayor, Hennadiy Trukhanov, widely seen as pro-Russian, released an angry video in the early days of the war in response to the Kremlin’s claims that it was defending Russian speakers in the country. “Who the fuck are you planning to defend here?” he asked. In the central city of Kryvyi Rih, the mayor, Oleksandr Vilkul, previously seen as pro-Russian, has also rebranded himself as a patriot and taken up defence of the city.

As well as strengthening the sense of Ukrainian identity among politicians and the general population in the south and east of the country, the war has also helped increase respect for these areas in the patriotic strongholds of western and central Ukraine, where some doubted the loyalty of parts of the east, particularly after 2014.

Kozhemyako said any doubts about these regions should now be considered settled: “A lot of people in western Ukraine saw how Kharkiv fights,” he said.

Shaun Walker is the Guardian's central and eastern Europe correspondent. Previously, he spent more than a decade in Moscow and is the author of The Long Hangover: Putin's New Russia and the Ghosts of the Past.