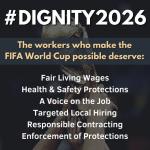 New York, NY – Today, NYC-based worker rights organizations celebrated the selection of the New York/New Jersey region to host games for the upcoming 2026 World Cup. With the games set to take place in the United States, Canada, and Mexico, local leaders allied with Dignity 2026 - Workers &   Communities United for Rights at the World Cup look forward to an ongoing dialogue on human and worker rights as part of the planning process for 2026.

“We’re proud to be hosts to one of the world’s greatest sporting events, and even more excited about the potential of what it can do for our City,” said New York City Central Labor Council, AFL-CIO President Vincent Alvarez. “Now, we need to work together to ensure that these games are an economic boon for New York City residents, while guaranteeing workplace protections for New York City workers. The NYC Labor Movement looks forward to working with the New York/New Jersey host committee in order to ensure that this is a milestone for worker rights in this city.”

New York City worker rights groups are local allies of the international coalition Dignity 2026. The coalition of groups has been in contact with FIFA for months regarding the expectation for minimum standards. In December, the groups released an open letter to FIFA demanding the governing body commit to a series of minimum labor and human rights standards and agree to negotiate with national human rights stakeholders. After a breakthrough in stalled talks as reported in The Guardian, Dignity 2026 sat down with FIFA on April 27th, 2022.

“FIFA has key responsibilities to uphold human rights and lift labor standards, as one of the richest and most powerful non-governmental organizations on the planet,” said Cathy Feingold, Director of the International Department at the AFL-CIO. “I’m glad that FIFA is now in regular talks with our coalition. But FIFA is still far from acknowledging the full extent of its obligation to consult and partner with our national movements, and has not yet committed to respect and support the local communities and workers who will make these games possible.”

Demands of FIFA have been consistent over the course of the coalition’s correspondence. Groups have repeatedly called for FIFA to commit “to be bound by a detailed set of minimum standards,” including: