Afl-CIO Unveils Plan To Grow but Some Union Leaders Underwhelmed 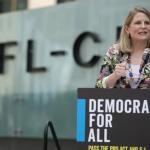 In light of the youth-driven surge of union drives at Starbucks, Amazon, Apple and elsewhere, the AFL-CIO – the main US’s labor federation – is facing growing pressure to undertake a bolder effort to help today’s burst of unionizing expand far faster.