To Fight Inflation, the Fed Is Declaring a War on Workers 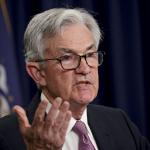 What can be done? Federal Reserve chairman Jerome Powell has an idea: throw cold water on the hot labor market — perhaps the one bright spot in the current economy.

In fact, Powell recently screamed the quiet part out loud, making clear the largest central bank in the world is in fact an adversary to workers, when he declared that his goal is to “get wages down.”

At a May 4 press conference in which he announced a .5 percent interest rate hike, the largest since the year 2000, Powell said he thought higher interest rates would limit business’ hiring demand and lead to suppressed wages. As he put it, by reducing hiring demand, “that would give us a chance to get inflation down, get wages down, and then get inflation down without having to slow the economy and have a recession and have unemployment rise materially.”

In other words, Powell is saying that the primary, blunt financial instrument at his disposal to address sky-high inflation — hiking interest rates — will limit job opportunities and suppress pay.

Increasing borrowing costs and discouraging investment would not do much to address the root causes of today’s inflation — brittle supply chains, a surge in energy prices further heightened by Russia’s invasion of Ukraine, a housing crisis (which could actually be exacerbated by interest rate hikes), all of which are undergirded by corporate concentration enabling exorbitant corporate profits.

Hiking rates would likely suppress wages and worker power, as Powell indicated, a roundabout way to tackle inflation. That’s because there is overwhelming evidence that worker wages are not driving inflation, especially since wage increases are failing to keep up with rising prices. Friday’s data showed that while wages have continued to increase, the rate of increase is slowing.

Does the Fed chairman really mistakenly believe that wages are driving inflation? If not, Powell — a mega-wealthy private equity mogul and a Republican — might have just validated an argument long made by progressives: that a key driver of the central bank’s interest rate policies is actually to suppress labor power.

Meanwhile, if President Joe Biden and the Democrats who control Congress continue to sit on their hands and fail to take real action to address skyrocketing energy prices, the supply chain crisis, and corporate greed, they will be accepting a response that will force workers to bear the brunt of the crisis.

“If you endorse today’s rate hikes, and the further tightening it implies, you are endorsing the reasoning behind it: labor markets are too tight, wages are rising too quickly, workers have too many options, and we need to shift bargaining power back toward the bosses,” Josh Mason, an economist at the Roosevelt Institute and a professor of economics at John Jay College, City University of New York, wrote in a recent blog post.

The Fed and Worker Power

The Fed, which is tasked with controlling the money supply and regulating banks, was given a dual mandate by Congress in 1978 to guide a monetary policy aimed at economic growth: achieving “full employment” and “price stability.”

Powell and the six other officials who set this monetary policy do so primarily by adjusting interest rates, or the cost of borrowing money.

Powell, who was first appointed to helm this operation by President Donald Trump in 2017, was reappointed for a second term by Biden in 2021. “Chair Powell has provided steady leadership during an unprecedently challenging period, including the biggest economic downturn in modern history and attacks on the independence of the Federal Reserve,” said Biden in a statement announcing his nomination.

The statement added, “Powell and [his colleague Lael Brainard] share the administration’s focus on ensuring that economic growth broadly benefits all workers. That’s why they oversaw a landmark reevaluation of the Federal Reserve’s objectives to refocus its mission on the needs of workers of all backgrounds.”

Before Powell’s first term, the Fed had pursued a monetary policy that limited worker power. In the decades following the 1979 “Volcker shock” — in which chairman Paul Volcker induced a recession in order to cut inflation, creating a debt crisis in Latin America and crushing the labor movement — the bank consistently limited inflation below its 2 percent benchmark, suppressing economic growth.

“Tight to an Unhealthy Level”

When COVID hit, it seemed like the Fed was shifting away from its anti-worker stance. The bank slashed interest rates and went on a bond-buying spree, in addition to other measures.

While the Fed’s intervention in corporate bond markets may have amounted to a bailout of corporate America — especially heavily leveraged oil and gas companies — and lending programs prioritized large companies over municipalities, its actions early in the pandemic helped bring interest rates to zero.

“In 2015, I was working as an economist at the Federal Reserve. If someone told you then that in 2020 a deadly pandemic would shut down life as we knew it and that in the midst of a stop-and-go response from Congress, a Federal Reserve chair — who was a lifelong Republican and a Wall Street executive appointed by President Donald Trump — would emerge as a champion of Main Street, you may have thought she was from another planet,” wrote economist Claudia Sahm in a New York Times opinion piece last year.

Today’s labor market is, by some metrics, better for workers than at any point in recent history. Thanks to COVID-19 relief legislation — namely the CARES Act and American Rescue Plan providing enhanced unemployment benefits and stimulus checks — working people had the flexibility to quit terrible jobs and take higher-paying ones. Additionally, the labor force shrunk as parents stayed home to take care of their children who couldn’t go to school or day care, workers died of COVID or were debilitated by lingering COVID symptoms, and people feared returning to the workforce due to inadequate pandemic protections.

This tight labor market has enabled historic gains for workers. Wage inequality is at its lowest point in forty years. In the restaurant and hospitality industries, wages have increased by over 10 percent in the past two years. For every unemployed worker, there are two job openings. As a result, employers have to compete for workers by offering higher wages and better benefits. That’s good for workers: over half of people who quit their jobs for a new one receive a pay increase greater than 10 percent, according to ZipRecruiter survey data, and the average pay increase is 7.5 percent. A resurgent labor movement has massively benefited from the fact that workers have less to fear from being fired, and can credibly argue that winning a union could mean winning wage increases.

But now, the tide might be turning for workers — since statements by Powell and other bank officials indicate that the Fed hasn’t actually turned away from its anti-labor stance.

In March, Powell noted that the labor market may be too good for workers. “Take a look at today’s labor market: What you have is 1.7 job openings for every unemployed person,” Powell told reporters after raising interest rates for the first time since 2018. “That’s a very, very tight labor market. Tight to an unhealthy level, I would say… If you were just moving down the number of job openings so that they were more like one to one, you would have less upward pressure on wages. You would have a lot less of a labor shortage.”

The way interest rates impact wages is based on a number of contingent factors, but the main theory is that raising the cost of borrowing money discourages businesses from making investments, which leads them to slow hiring or even lay off workers. If workers have fewer options for jobs, they are more likely to accept lower wage work and less likely to form unions.

Workers in the United States aren’t the only ones who will suffer from Powell’s policy. Rate hikes by the Fed and other central banks around the world are already contributing to debt crises in developing countries, leaving more people to die of hunger in places like Yemen and Sri Lanka.

There’s no question that the federal government needs to deliver some type of relief.

Inflation is outpacing wage growth for most workers, meaning that “real wages” are actually declining. Not everyone experiences the same level of inflation, based on their expenses, but today’s price increases appear to be hitting low-income people the hardest.

But federal lawmakers could forge an alternate path to combating inflation. They could, for instance, make wealthy people pay the price of inflation — such as by raising the corporate tax rate, which Republicans slashed by 40 percent in 2017, or instituting a capital gains tax.

Of course, with corporatists like Senators Kyrsten Sinema (D-AZ) and Joe Manchin (D-WV) running the show in a fifty-fifty Senate, those tax policies don’t appear to be on the table.

Instead, the White House has continued to endorse the Fed’s approach. “My plan is to address inflation. That starts with a simple proposition: respect the Fed, respect the Fed’s independence, which I have done and will continue to do,” Biden said in a recent meeting with Powell.

After Friday’s inflation numbers were published, Brian Deese, the director of Biden’s National Economic Council, said: “What the numbers today underscore is what the president has been saying and what we are focused on — which is fighting inflation has got to be our top economic priority. The Fed has the tools that it needs, and we are giving them the space that it needs to operate.”

Unfortunately, deferring to the Fed to address the crisis means throwing low-wage workers out of their jobs — and decreasing workers’ wages and power.

Julia Rock is a reporter for the Lever.