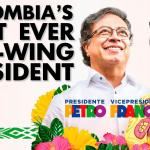 Gustavo Petro won Colombia’s presidential election on June 19. This will make him the first left-wing leader in the South American nation’s history.

In the video, podcast, and written analysis below, Multipolarista editor Benjamin Norton discusses Petro’s historic victory, what it means for Colombia, Latin America, and the world, and how difficult it will be for him to govern. [for the video and podcast return to the site}

Gustavo Petro won the first round of Colombia’s presidential election on May 29. In the second round, he defeated far-right candidate Rodolfo Hernández, a real estate mogul with an estimated $100 million in wealth.

Petro previously served as mayor of the capital Bogotá, and long before that a former guerrilla in the armed socialist group M-19. After putting down his weapons, Petro moderated his politics and moved to the center-left.

His presidential campaign brought together a broad coalition of left-wing parties, under the name the Pacto Histórico (Historic Pact), ranging from liberals to the Communist Party.

Petro will face many obstacles to governing. He does not have a majority in the bicameral Congress; both the Senate and Chamber of Representatives remain dominated by right-wing, centrist, and neoliberal parties.

Colombia’s state security services, which are closely linked to paramilitary groups, and which killed thousands of civilians in the “falsos positivos” (false positives) scandal, are also openly antagonistic to Petro.

An ardent supporter of peace, Petro hopes to settle the armed conflict that has destabilized Colombia for decades. He wants to honor the government’s 2016 peace deal with the FARC, which has been systematically violated by the administration of current far-right President Iván Duque.

Hundreds of signatories of this agreement, former socialist revolutionaries who put down their arms, have been murdered since 2016.

In an attempt to facilitate peace, Petro has called for land reform. He recognizes that land ownership is concentrated in the hands of a few oligarchs, with millions of campesinos toiling in brutal, inhumane conditions, and understands how this has fueled violence.

Petro wants to ensure that peasants will have their rights guaranteed against the multinational corporations, Colombian oligarchs, and death squads that have long terrorized them. This, however, is much easier said than done.

Petro likewise pledged to reverse the neoliberal economic policies that have ravaged Colombia, pushing a staggering 40% of the population into poverty.

In 2021, working-class Colombians rose up against the crushing austerity measures of current President Duque. Petro supported the anti-neoliberal protests that rocked the country for months.

Duque, for his part, was the hand-picked candidate of Colombia’s former far-right President Álvaro Uribe, a powerful representative of the oligarchy who is closely linked to drug cartels and paramilitary death squads.

Petro’s victory represents the end of the right-wing Uribista movement that has dominated Colombian politics since Uribe first rose to power in 2002.

The Pacto Histórico’s vice-presidential candidate, Francia Márquez, is a leftist social movement activist from the Afro-Colombian community, which has been historically marginalized and repressed by the Colombian state and oligarchy.

Márquez publicly criticized the US government for meddling in Colombia’s electoral process. She also condemned the war on drugs, which she called a failure.

Márquez wants peace, and opposes further militarization of the country. She blasted Colombia’s free-trade agreement with the United States, which she said should be renegotiated.

Márquez has stressed the urgent need for land reform and reparations for Indigenous peoples and oppressed nations in Colombia.

When it comes to his foreign policy, Petro has a much more mixed record. He harshly criticized the socialist governments of Venezuela and Nicaragua during his presidential campaign, making baseless accusations and comparisons that leftists across Latin America condemned as ridiculous.

But Petro and Márquez both also called for normalizing relations with Colombia’s neighbor Venezuela. This means that, although their government certainly won’t be a friend of Venezuela’s Chavista movement, it will end recognition of US-appointed coup leader Juan Guaidó.

Colombia’s current far-right Duque government is one of fewer than 15 countries in the world that still recognize Guaidó as supposed “president” of Venezuela, despite the fact that he has never received a single vote in a presidential election.

Under Duque, Colombia has supported violent cross-border attacks on Venezuela, including a failed invasion in May 2020, known as Operation Gideon, which was sponsored by the Donald Trump administration, and, according to Colombians involved in the operation, overseen by the CIA.