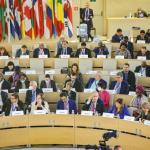 The Covid 19 pandemic is not yet over and we are already looming in the face of a new crisis spurred on by the war in Ukraine and a rampant inflation that is affecting many countries in the developed and developing world alike.

The ILO Director-General’s report to the Conference warns that a food, energy and financial crisis is approaching. This scenario will also lead to a new refugees and migration emergency and a climate catastrophe that will affect all countries.  In the reality, we do not need to wait for future events to happen as we are already in the middle of a global structural crisis of the neo-liberal economic model that is responsible for the obscene growth of inequality, injustice and poverty and for the irreparable damages to our planet.

All this is no longer acceptable nor sustainable.

Corporates that made huge profits at the expense of workers and people’s rights are to be held accountable for the multi-layer crisis we are facing.

Make-up solutions to the current economic system will be insulting for billions of working people. It’s time to act decisively for a change of paradigm that;

The pandemic taught us that health, care, education, water and sanitation, transport, energy, food are essential for a safe and sustainable development. Let’s stop austerity measures leading to privatization and profit over human beings and invest more in public services and protection of natural resources and the environment.

Recovering the role of states and multilateralism ending the capture of corporates is essential to increase the scope of human and basic rights, protect workers’ rights and achieve gender equality once and for all.

This is also the only way to create an alternative to the belligerent narrative and the dangerous race to rearmament we are witnessing in these days.

If not, the future of every single human being will be at risk.

In the end, it wasn't the robots that were going to threaten the future of work, but much more well-known causes. The same ones that have already been identified more than a hundred years ago when a group of visionary leaders decided to set up the International Labour Organization as a global remedy to insecurity, humanitarian, political and economic concerns derived from war and its social and economic costs.

Is the ILO up to the task this time?

The new Director-General has a titanic task to rethink and reposition the role of the Organization and make sure it fulfils the premise that reads “Whereas universal and lasting peace can be established only if it is based upon social justice”.

Rosa Pavanelli is General Secretary of the global union federation Public Services International. She was elected at PSI’s World Congress in November 2012 and was re-elected for a second mandate in November 2017.

Public Services International is part of the original movement of Internationals: united groups of socialists, trade unionists and workers created to link the struggles of the working class around the world.

As a union federation, we include 700 affiliated workers organisations; from grassroot movements to national union centers. Our power comes from the workers whose interests we defend. All of our activities are based on the concept that when we grow our power, we can improve the live of workers the world over.

Our members work in public administrations; public utilities such as water and sanitation, electricity, and solid waste. They operate public transport and maintain public spaces; work in social, culture and education services such as libraries, museums, kindergartens, schools and universities. They are health and social services workers. Firefighters, emergency, medical first responders and municipal police are also among LRG/municipal workers.