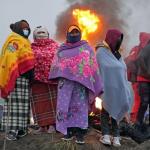 The Global South has much to teach the Global North about fighting for reproductive justice, providing abortions to whoever needs them, regardless of the law - and about building a mass, international, feminist movement.

LGBTQ+ rights have been a fraught battleground in Lebanon. Now, keen activists and NGOs are fighting homophobia head-on by challenging stereotypes and social consequences in their quest to create an inclusive national atmosphere.

[Moderator’s note: This is a translation by Portside. Read the original in German here. See also Loren Balhorn's analysis below.]

Die Linke party chairman Janine Wissler has been confirmed in office despite intra-party criticism. At the Federal Party Congress, Wissler, 41, prevailed with 57.5 percent of the votes in a combative contest. MEP Martin Schirdewan was elected as co-party leader with 61.3 percent.

Wissler has been leading the party since February last year. However, her co-head Susanne Hennig-Wellsow resigned after massive election defeats and a sexism scandal in the party. Wissler was particularly confronted with accusations from the Linke youth that there had been failures in dealing with MeToo cases.

A 34-year-old member of the Bundestag, Heidi Reichinnek, had competed against Wissler for the position provided for women in the co-chairmanship. She received 35.9 percent of the votes. Reichinnek, the party chairman in Lower Saxony, sent a battle signal with her candidacy. In her introduction speech, the women’s policy spokeswoman said that she wanted to do “much better” than before.

Immediately after the election of the two party leaders in Erfurt, a scandal broke out when two victims of sexual attacks sharply criticized the vote for Wissler. One of the women said, close to tears, she doesn’t know how to stay in the party now. These speeches and above all the timing met with criticism from other delegates.

The evening before, the congress had dealt with the topic of sexism and MeToo. The youth association soundly criticized the party leadership’s handling of those affected.

Leipzig member of the Bundestag Sören Pellmann had also applied for the party chairmanship. He was considered the chosen candidate of the camp of Bundestag member Sahra Wagenknecht. It came to 31.7 percent.

The party board around Wissler prevailed on Saturday in the debate on the attitude of Die Linke to Russia. A majority of delegates were in favor of clearly condemning the Russian war of aggression against Ukraine.

Sudanese people demand a political system with constitutional arrangements that would bring about true justice, protect and maintain their hard-earned freedoms and build lasting peace and stability, and pave the way for full-fledged democratic governance and civilian rule.

Ecuador’s government has stopped negotiations with an Indigenous coalition that has been carrying out nationwide protests that have paralyzed parts of the country, shutting down roads and causing delays in the country’s oil production. Since June 13, Confederation of Indigenous Nationalities of Ecuador has been protesting rising costs, medicine shortages and mining projects.

The Slovenian Left is in a deeply ambivalent position. Levica finds itself in a much stronger place than expected, despite receiving far less votes. Without a stronger identity and a grassroots movement capable of building deeper popular trust, Levica remains politically vulnerable. The risks are great, but so are the possible rewards.

The magnitude of the ongoing armed rebellion is quite large. And it has gained considerable momentum over the past year, which is totally unexpected. Previously, observers said the military will win in the end. But they have changed their tune lately and now say that there is a possibility that the Myanmar military might lose.

After thousands of trade union workers marched wearing red, green and blue as part of a strike action in Brussels this week, social media users mischaracterized video from the protest to claim it was predominantly an anti-NATO demonstration. The organizers made no mention of NATO. Demonstrators marched to criticize rising inflation and demand salary increases.

On June 23, general elections were held on the Caribbean island of Granada - Gwenad, in Creole - the second smallest state in the Western Hemisphere, located to the northeast of Venezuela, and with a population of 100,000 inhabitants, of which approximately one third live in the capital, Saint George. These elections have meant a radical change in the policy of this island nation of the Antilles, since it has put an end to the hegemony of conservative New National Party, which ruled from 1984 to 1990, under the leadership of Herbert Blaize, and with Keith Mitchell as prime minister from 1995 to 2008 and from 2013 to the present day, bringing this former cricketer to 22 years at the head of the government of this Caribbean nation that, before its independence, in 1974, was a British colony, and previously French and Spanish. Veteran conservative leader Keith Mitchell, 75, announced his retirement from political life after the electoral blow.

At the head of the new Granada government will be Dickon Mitchell, 43, of the center-left National Democratic Congress, after obtaining 31,398 votes, almost 52%, which translates into 9 of the 15 seats in competition, compared to the 6 seats won by the New National Party, with 28,959 votes and 47.8%. The Grenada United Labour Party, the oldest on the island, and which under the leadership of Eric Gairy was the majority party after independence, had only 64 votes, with a meager percentage of 0.11%.

The National Democratic Congress, now called to form a government, which won the elections with the slogan “Transforming Grenada!”, is now the primary force in the Granada House of Representatives, after nine years without representation, due to the electoral system called first-past-the-post, or single-member majority count, used in most Anglo-Saxon countries - Grenada is part of the Commonwealth - by which the country is divided into 15 districts, earning each seat the force that has the most votes in each of them. Thanks to this system, the New National Party of the outgoing prime minister had come through in the previous general elections with all 15 deputies of parliament, despite the fact that the National Democratic Congress had achieved 40.5% and only ten thousand votes difference. [...]

In the 1976 general elections, marked by allegations of fraud, the Popular Alliance - made up of the New Jewel Movement (NJM), the Grenada National Party and the Christian Democratic Labour Party - increased its parliamentary representation from one to six deputies, out of a total of 15. On March 12, 1979, taking advantage of the fact that the authoritarian Gairy was out of the country, the Marxist New Jewel Movement led a coup d’état, with the majority support of the population, and took power, and appointed a provisional revolutionary government, headed by Maurice Bishop.

The “great revolution in a small country” of the New Jewel focused, especially, on developing social policies that would take the country's popular classes out of marginalization, creating literacy campaigns and introducing Creole in education. For the first time primary and secondary education was free. New civil infrastructures were created, improving the electricity grid and building new roads. In the field of health, Cuba's support with doctors and health equipment was of special relevance, moving towards a free and universal system that did not exist. Small farmers were also supported, through the creation of cooperatives and state credits. [...]

With the excuse of protecting the American citizens who lived on the island, President Ronald Reagan ordered the invasion of the island on October 25, with a force of no less than 5,000 men, to which he added a contingent of 300 policemen from Caribbean states from his orbit. although the armed opposition of the Grenadians, supported by Cuban technicians and workers, lent them a resistance they did not count on. Subsequent reports indicate that the invasion was already planned one year in advance. The United Nations General Assembly condemned it as “a flagrant violation of international law” by 108 votes in favor, 9 against and 27 abstentions.

In the first general election after the American withdrawal, in December 1983, Herbert Blaize of the New National Party won, and served as prime minister until his death in 1989. During his tenure, youth unemployment, delinquency and drug addiction increased severely. That is the party, heir to the invasion and folded to American interests in the region, which has been defeated by Dickon Mitchell, who in the election campaign has not hidden his admiration for Maurice Bishop, to whom he has paid tribute.