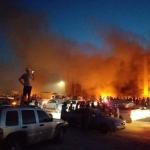 Readers of Global Left Midweek will find some of this week’s posts unusually long and possibly tough going. Between the threat of broader war, inflation, and political shifts, the left is forced to take on some heavy lifting, and that requires more rigorous theoretical efforts. In particular, the Supreme Court’s ruling undoing regulation of fossil fuel emissions is truly “existential” for life on the planet. Internationally, the tone of discussion has turned from grim warnings to high alert. We have to struggle harder, and just as important, think harder. - GLM moderator

An absolute catastrophe for civilization and the human species as a whole is still avoidable with a revolutionary-scale reconstitution of the current system of production, consumption, and energy usage, though the time in which to act is rapidly running out.

Facing an extremely challenging environment, workers and trade unions are fighting back at different levels, and in the process developing new ideas and imagining new futures. The ongoing struggles seek to respond to immediate challenges posed by government policies which claim to mitigate the environmental crisis, often without workers’ and communities’ involvement.

Despite the decline of unions, there are many signs of worker resistance. This is related to rising inequality, union inroads into seemingly impenetrable occupations and industries, the development by unions of international links and digital tools, and the inevitable pressure for labour reform.

For the latest wave of the Left in power sweeping the region, the challenges are steep. Radical politics will continue to emerge from the streets.

Libyans, many impoverished after a decade of turmoil and sweltering in the soaring summer heat, have been enduring fuel shortages and power cuts of up to 18 hours a day, even as their country sits atop Africa’s largest proven oil reserves. Protesters stormed the parliament building in the eastern city of Tobruk, ransacking its offices and torching part of the building.

Hundreds of Ghanaians took to the streets of central Accra, clashing with police as they protested against the rocketing price of fuel and food and what they see as the government’s inaction on the crisis.

We demand a just and fast energy transition, guided by climate science, directed towards social justice, and led by workers and the local communities. This transition process holds Galp and its shareholders financially responsible for the costs of this transformation.