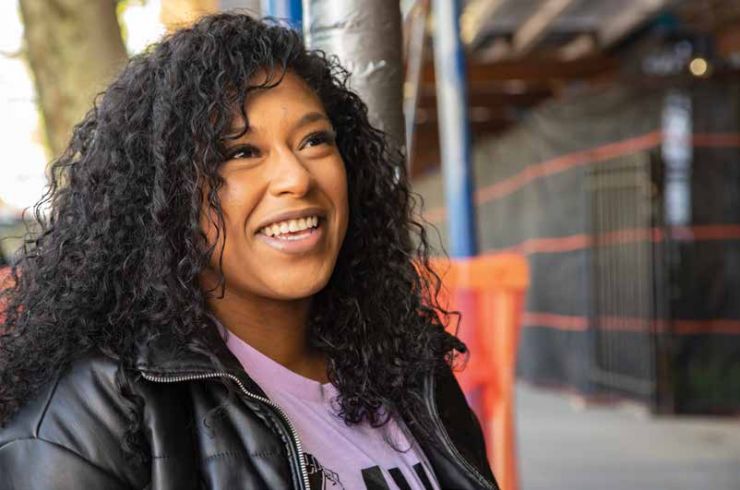 Chris Smalls and Anjelika Maldonado have become household names since they formed a union at the Amazon fulfillment center on Staten Island and won the first US election in the giant corporation’s history.

The David and Goliath struggle captured the imagination of millions of people around the world. It gave fresh hope to both existing union members and those who were considering organizing unions of their own.

It is no accident that the first union victory against Amazon took place in New York. Roughly 20 percent of New York workers belong to a union, which is twice the national average of 10 percent.

With 1199SEIU being the largest union in New York City, it is not too surprising that both Chris Smalls and Anjelika Maldonado’s mothers were 1199 members.

Dawn Smalls joined 1199 when she started working as a secretary in the hospital formerly known as St Luke’s in Harlem, which is now Mount Sinai Morningside. “I always understood the value of being part of a union to negotiate pay and benefits,” she said, “Chris comes from a union family. His grandmother worked at Bergen Regional hospital which was also unionized. We knew what unions meant. If you get in a bind, you will be protected.” Her son did get into a bind when he led a protest in 2020 at the JFK8 Amazon fulfillment center over concerns that working conditions there were liable to lead to the spread of the coronavirus. Amazon fired him. “They don’t know my son,” said Smalls, “He was born on the fourth of July. Christian has always had the personality of ‘I got this’. I believe that people who lead are chosen. He’s very natural with it. I’m beyond proud of him.” When he was invited to attend the US Senate Budget Committee in May, Chris Smalls went headto- head with Senator Lindsey Graham, who was defending corporations who tried to block unionization. “The people are the ones that make these companies operate. I think it’s in your best interest to realize that it’s not a left or right thing. It is not a Democrat or Republican thing,” said Smalls, 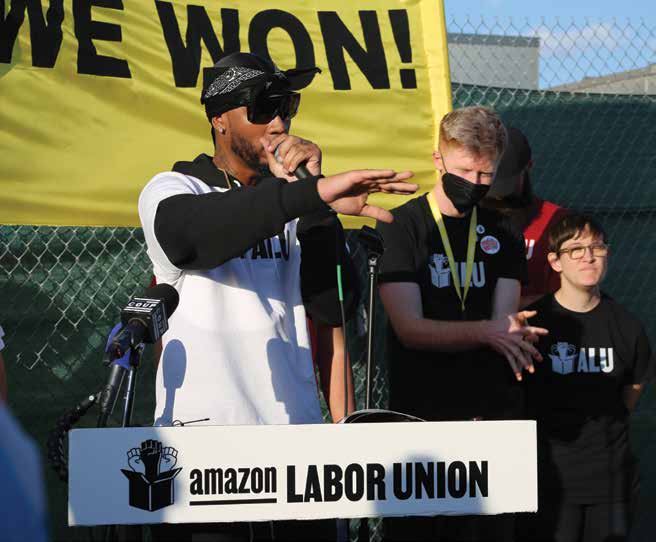 “It is a worker’s thing. We’re the ones that are suffering in the corporations that you’re talking about. You should listen because we do represent your constituents as well. The people are the ones that make these corporations go. It is not the other way around.” Smalls reminded the Senators that he was arrested for trespassing while organizing and delivering food to his former co-workers at the JFK8 fulfillment center. Anjelika Maldonado, who chairs the organizing committee for the Amazon Labor Union, was also invited by Bernie Sanders to attend the Senate Committee. “Bernie Sanders is my OG,” said the 27-year-old union leader. “Smalls shut down Lindsey Graham. He had it in his delusional mind that we weren’t going to be combative.”

Maldonado’s mother was also an 1199er. She started out as a Surgical Tech at Montefiore Hospital, where she took advantage of her 1199SEIU Training and Upgrading Fund to become an LPN. Later she studied to become an RN and started work at Lincoln Hospital in the Bronx in May.

“1199 was the first thing that made me want to start organizing,” says Maldonado, “Mom never thought that her being in a union would have changed her life and that of many others.”

Being on her mother’s 1199SEIU healthcare plan for most of her life and knowing about the summer camps and childcare vouchers the union provides, gave Maldonado a big push to organize her co-workers at Amazon.

“I work 6.15pm-6.45am three days a week at Amazon, so I can take my son to school,” she adds, “When we were fighting to organize JFK8, I was at Amazon seven days a week. It was the only way for people to believe I was serious.”