The 1877 Class War That America Forgot 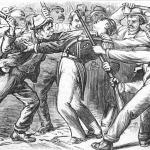 On July 16, 1877, forty railroad workers responded to news of a pay cut by stopping work and shutting down rail traffic in Martinsburg, West Virginia. That single event had a domino effect, spreading rebellion like wildfire among America’s working class. By the end of the month, one million workers had stopped working in industrial cities across fourteen states, from New York City to San Francisco.

Writing to Friedrich Engels on July 24 of that year, Karl Marx called it “the first uprising against the oligarchy of capital which had developed since the Civil War,” which could lead to a “serious workers’ party in the United States.”

It was no accident that Marx’s prediction didn’t quite pan out. In response to the work stoppages, capital waged a class war against labor with an organized and violent show of force not seen since the Civil War.

The summer of 1877 was not a great time to be working on the railroad all the livelong day.

This was the Gilded Age, a sardonic turn of phrase coined by Mark Twain to describe the moral bankruptcy of the political and financial elite who were getting unfathomably wealthy on the backs of workers thanks to turbocharged capitalism. The so-called labor question had supplanted slavery as the dominant moral crisis of Reconstruction-era America.

Unions were a marginal force in rapidly industrializing cities in the North, and laborers endured long hours and starvation-level wages, with few rights on the job. Their robber baron bosses kept whittling down workers’ salaries after the Panic of 1873, the worst financial depression in American history until that point.

“Are not railway employees . . . enduring a tyranny compared with which British taxation in colonial days was as nothing, and of which the crack of the slave whip is only a fair type?” published the Journal of the Brotherhood of Locomotive Engineers in 1873.

The situation reached a boiling point in 1877, as railroad magnates colluded to slash workers’ wages twice, despite raking in huge profits. Shareholders and managers did just fine, but ordinary workers’ pay was cut by up to half.

The aforementioned Martinsburg railroad workers, who unintentionally kicked off the Great Upheaval, struck on July 16 in reaction to their third pay cut that year. They demanded a 10 percent raise instead, and began uncoupling train cars to keep them at a standstill. The strike migrated east to west along significant rail routes in the North. The strikers were not just railroad workers. Others walked off the job in solidarity, including miners and boatmen in West Virginia, box makers in Baltimore, and butchers in Chicago.

In Pittsburgh, trains and rail yards were set ablaze, and in St Louis, a coalition of organized strikers — the St Louis Commune — took power for about twenty-four hours.

The capitalist class was mortified. Business owners dreaded the possibility of an American version of the Paris Commune, which shocked Europe just six years prior. They were genuinely concerned about a second civil war — this time with foreign-born socialists and communists at the forefront of a war on the oligarchy.

Officials and newspaper accounts had many words to describe the Great Upheaval: Insurrection! Rebellion! Revolt! Allan Pinkerton called it a “monster riot” in his 1878 book Strikers, Communists, Tramps, and Detectives. A nineteenth-century spymaster, Pinkerton’s union-busting detective agency became hired guns for wealthy businessmen looking for protection after the summer of 1877.

When the industrialists couldn’t pressure their employees back to work, they called on politicians to use every lever of state-sanctioned violence possible: police, the National Guard, federal troops. West Virginia’s governor was the first to call in troops. One Martinsburg striker was killed after a shootout with a soldier, a harbinger of the death and chaos to come.

On July 20, 1877, a crowd had gathered at the Sixth Regiment Armory in Baltimore and began throwing rocks at a militia. The troopers responded by firing muskets into the crowd and attacking with bayonets. At least ten people were killed, including “a barefoot newsboy in shirt sleeves, a 16-year-old photography student, and a 19-year-old baker,” according to the Baltimore Sun. Days later, the state militia fired on a gathering of strikers and their families in Pittsburgh, killing twenty. Among the strikers were women and children, which proved to be a problem for the military ordered to quell dissent.

“The great trouble,” lamented the New York Times, “is that the people along the line of the road are thoroughly in sympathy with the strikers, and the military cannot be depended on to act against them in this emergency.”

Chicago’s Battle of the Viaduct

On July 23, 1877, the night before the strike wave hit Chicago, Albert Parsons delivered a fiery speech to about thirty thousand immigrant workers primed to take action. The radical socialist had just lost a city council bid as a new labor-centric Workingmen’s Party member.

“We are assembled as a Grand Army of Starvation,” said Parsons. “It rests with you whether we shall allow the capitalists to continue to exploit us. Will you organize?”

The following day, thousands of exasperated workers walked off the job and paraded through Chicago’s streets, some vandalizing their workplaces or cutting the trolley lines. The local press had harsh words for them, tinged with xenophobia and class prejudice. One account described “hordes of ragamuffins, vagrants, saloon bummers, and generally speaking the dregs of society.”

The working-class Chicagoans resented the stereotypes.

“Look at me, look at my hands — do I look like a loafer or a laboring man?” an Irish boat hand exclaimed to a small crowd. “We know who we’re fighting for and what we’re doing. We’re fighting those goddamned capitalists. Ain’t we?”

Chicago mayor Monroe Heath shuttered the city’s saloons, gathered the police, and deputized civilians to act as security. Several aldermen formed their own militias, led by middle-class clerks and managers, including a small band of cavalry in the 4th Ward. Heath initially ordered officers to fire above the heads of crowds of agitated workers to avoid a repeat of the Pittsburgh massacre. But as the chaos mounted, police lowered their guns and aimed directly at strikers, killing three and wounding more.

The police often acted as the aggressors. A few hundred German craftsmen were meeting with their employers to bargain over an eight-hour workday in Chicago’s West Loop when several officers rushed in, killed an unarmed twenty-eight-year-old cabinetmaker, and injured others.

Chicago’s violence peaked on July 26, in what’s been called the Battle of the Viaduct. The Chicago police and a regiment of the Illinois National Guard fired their muskets on more than ten thousand people jammed into a viaduct near the southwest side. The troops shot not only strikers but “sight-seers,” recounted Parsons, “killing several persons, none of whom were even on a strike.”

Five hundred Irish immigrants marched in a column along Halsted Street in Chicago — some of them butchers still wearing aprons and wielding butcher knives. Two boys marching in front of the column carried a banner that read “Workingmen’s Rights.” After refusing to retreat from a bridge, the Irish clashed with police for control for nearly an hour. One Irish woman, Mollie Cook, was arrested for firing at police from the second-story window of her home on Halsted.

Reporters made much of the foreign-born status of the strikers. “Outbreak of Bohemian Amazons!” blared one newspaper headline about German and Central European immigrant strikers, citing women with “brawny, sunburnt arms brandishing clubs.”

Two US Army regiments, recently arrived from the Dakota Territory, where they’d been fighting the Sioux, took up position on the viaduct with Gatling guns to support the police and militias.

Faced with the prospect of battling three thousand well-armed soldiers and militiamen — a force more significant than that of the Battle of Sitting Bull — the rebellious Chicago residents eventually retreated.

In the end, stones and makeshift clubs were no match for guns. Of the thirty people killed in action in Chicago, nearly half were boys under eighteen, and roughly two hundred strikers were injured. No police were killed.

Similar scenes unfolded across the country, and were met with similarly organized resistance. By August 1, 1877, the Great Upheaval had been all but snuffed out, and nearly all trains had resumed running.

In addition to local and state police and informal militias, President Rutherford B. Hayes had commanded almost sixty thousand federal troops into action in ten states. Over one hundred people were killed and thousands injured. Big Railroad fired employees who went on strikes and refused to rescind the pay cuts of others, leaving the strikers utterly defeated and demoralized.

In Chicago, members of the economic elite organized their own kind of union in the weeks following the Great Strike: the Commercial Club. The Commercial Club later purchased six hundred acres of land north of the city to construct Fort Sheridan, a fortress-like US Army base. It was designed to give the Illinois National Guard and US Army easier access, should they ever again need to act as the ruling class’s personal police force tasked with suppressing labor unrest. Believing the police also needed more and bigger guns, Chicago’s richest man, Marshall Field, donated thousands of dollars for Gatling guns and cannons to the city.

But all was not lost for the labor movement. The strike marked the beginning of a shift in public sympathy for the workers’ plight. Within two years, railroad companies began introducing reforms, and trade unions started to gain a measure of cohesion and momentum, beginning with the Knights of Labor. “The events of 1877 gave a great impulse and activity to the labor movement all over the United States and, in fact, the whole world,” observed Parsons.

Nine years after the Battle of Halsted, Albert and Lucy Parsons led a march of tens of thousands of people down Michigan Avenue in the first-ever May Day parade, demanding a universal eight-hour workday. May Day and what’s now known as the Haymarket Affair — in which Parsons was one of four defendants hanged for their unconfirmed role in a dynamite bomb lobbed at police on May 4, 1886 — are well known as defining moments in labor history.

But few will notice that the 145th anniversary of the Great Upheaval is this month. This nationwide uprising has largely fallen out of American historical memory. It was the closest the United States has ever come to a second civil war, and there are only a few scattered historical markers in Pennsylvania, Baltimore, and Martinsburg, West Virginia, to commemorate it.

Ryan Zickgraf is an Alabama-based journalist and is the editor of Third Rail Mag.