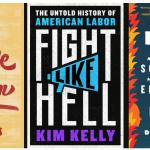 Here are a few books to check out or pre-order:

“We are getting our asses kicked... To revive the labor movement, we need to revive class struggle unionism.” So argues Joe Burns in his latest book, Class Struggle Unionism (Haymarket, 2022). Burns, whose previous books include Reviving the Strike and Strike Back: Rediscovering Militant Tactics to Fight the Attacks on Public Employee Unions, believes that a rebirth of the labor movement will require militancy inside the workplace, rank-and-file democracy, a willingness to challenge the union bureaucracy, and opposition to the capitalist economic system based on the ruthless pursuit of profits above all else. He says union activists need to develop a strategy to defeat injunctions and to convince national unions to organize the unorganized.

How can unions in different countries collaborate on campaigns against a common employer? The short new e-book, International Solidarity in Action: The Relationship Between the United Electrical Workers and the Frente Auténtico del Trabajo, is a handbook for anyone thinking about this question. It details the UE’s 30-year partnership with the FAT, an independent Mexican union, including how the unions have supported each other’s organizing campaigns and fights for labor law reform, as well as the impact of worker-to-worker exchanges on transforming the unions’ cultures toward international solidarity.

Union organizer Daisy Pitkin’s On the Line: A Story of Class, Solidarity, and Two Women’s Epic Fight to Build a Union (Algonquin, 2022) tells how a scrappy band of UNITE organizers and immigrant workers organized at industrial laundries in Phoenix. Pitkin describes the workers’ transformation—and her own—over the course of the campaign: “I’ve come to think of solidarity, this mixture of hope and care, as a physical force or maybe a force field.” Read a Labor Notes review here.

Fighting Times: Organizing on the Front Lines of the Class War (PM Press, 2022) is a memoir by former student activist turned auto worker Jon Melrod about his 50 years of organizing, including a fight against concessions at American Motor Co. in the ‘70s and ‘80s. Read more and order at jonathanmelrod.com.

Max Alvarez’s The Work of Living: Working People Talk About Their Lives and the Year the World Broke (OR Books, 2022) features interviews about workers’ experiences during the pandemic, including a silver miner, a sheet metal worker, a bartender, and new Labor Notes staffer Courtney Smith. Alvarez is editor-in-chief of The Real News Network and hosts the Working People podcast.

Fight Like Hell: The Untold History of American Labor (Simon and Schuster, 2022), by Kim Kelly, relates lesser-known struggles featuring women and people of color. Kelly is the labor columnist for Teen Vogue.

Pay No Attention to That Man Behind the Curtain: Getting Information About “Persuader” Consultants and the Employers Who Hire Them is a toolbox for labor activists looking to expose the union-busters contracted by management to campaign against union organizing efforts. The author is John Lund, former director of the U.S. Office of Labor and Management Standards. Get the e-book ($8.99) at laborsbookstore.com.

What industries and workplaces should we target for organizing, given their potential power? And which workers in those industries hold the most power, such that their withdrawal of labor would quickly grind things to a halt? Labor Power and Strategy by historian John Womack, Jr. (PM Press, 2022) urges organizers to identify and act upon these chokepoints.

Do you have suggestions of other recent books of interest to labor activists? Write to editors@labornotes.org.