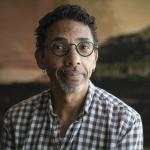 Robin D.G. Kelley is a distinguished professor and the Gary B. Nash endowed chair in U.S. history at the University of California, Los Angeles. He is the author of more than seven books, including Yo’ Mama’s Disfunktional!: Fighting the Culture Wars in Urban America (Beacon Press, 1997). The revised and expanded edition of his 2002 book, Freedom Dreams: The Black Radical Imagination, was released by Beacon Press on August 22. We spoke by telephone on June 28.

Q: In the foreword to the new twentieth-anniversary edition of your book Freedom Dreams, poet Aja Monet writes, “Twenty years later, the truths revealed remain relevant and necessary especially in the thick paralyzing despair of a global pandemic.” Where do you see the truths of today?

Robin D.G. Kelley: You and I are talking shortly after the overturning of Roe v. Wade, in what looks like the beginning of a rightwing, Christian-fundamentalist-driven agenda.

If there’s a main lesson in the book, it’s that many of these dark moments of repression are actually responses to rebellion, opposition, [and] resistance to other kinds of possibilities.

In other words, what we’re witnessing now from the Supreme Court is its rightwing turn in response to the opening of democratic possibilities going back to the 1960s, 1970s, and 1980s. In many ways, it’s almost as if the right was simply able to outmaneuver a lot of us. They were trying to shut down something.

Clarence Thomas has been on the court for a very long time, and this is probably the most active he’s ever been. He’s been waiting for this moment. But keep in mind, when we use terms like rollback, [it] means that we made some progress someplace. Something had to happen for them to roll it back. What we’re witnessing now is a rollback . . . .

[Here] in the United States, no one really could [have] imagined twenty-six million people on the street around the killing of a Black man, who himself was a formerly incarcerated person. That was unimaginable.

What I always remind myself, and my students and comrades, is that what’s possible now is far more visionary and expansive than what we thought was possible. That’s what Freedom Dreams is all about: trying to imagine something beyond that, rather than trying to go back to the status quo.

Q: You referred to the Black Panther Party as the one model of a successful organization that your students focus on. But that really was about a response to conditions. I think that what you’re talking about in Freedom Dreams is something different. What does emancipation look like beyond the notion of not being enslaved?

Kelley: It is about perspective. I’m a historian; that’s what I do. Sometimes we tend to look at history from the present backward: We figure out “How did we get here?” And when we ask that question, we tend to use tunnel vision, because what we’re trying to do is follow the path, and it almost presumes the path is inevitable.

What Freedom Dreams tries to do is ask the question “What does emancipation mean?” from the perspective of the moment, whether it’s the 1870s and 1880s, when Black people are searching for land, or the 1930s, when communists actually think they can win state power and create a revolution on a global scale, or whether it’s the 1960s or 1970s. In other words, when you’re standing in the moment and looking forward, what’s in front of you is this wide horizon of possibility—not the inevitable ending, which is not inevitable at all. 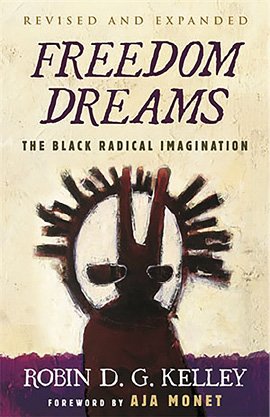 When we talk about “What does emancipation mean?” there are certain themes that come back over and over again. Those themes are a more expansive sense of what freedom means—that freedom is bodily autonomy, freedom is land, freedom is being able to not be policed and surveilled. It’s not just negative freedoms, but positive ones—to create a new commons, to take back the commons from which whole groups of people have been dispossessed. Freedom is decolonization. And that requires an imagination.

We have such a limited imagination in terms of what democracy means. So there’s lots of ways that we have to imagine this future, but the only way to do it is not through think tanks, blogs, and Twitter, but through actually being together and working together, and through struggle.

If there’s a major theme in Freedom Dreams, it’s that none of these visions of emancipation were like lightbulbs going off. They really were people in trenches, people trying to build movements, people trying to escape from forms of oppression to create the new world, the new land.

Q: You say in the book that you can’t divorce critical analysis from social movements, and the notion of movements as not just being about accomplishing a particular goal.

In this world of social media, you can pretty much be what you want to be [and] say what you want to say, and it has no consequences on the political landscape . . . . But now we have the criminalization of schoolteachers. So here I’m saying something quite different, which is to say that we’ve actually moved to an even more reactionary position, the kind of attacks on so-called critical race theory—which is not really that, but those kinds of attacks on curriculum. We’re in a place where people could be criminalized, could actually lose their jobs, if not be prosecuted.

The power of the state is being deployed in the culture wars in a way that I didn’t see in the 1990s. I didn’t imagine it would be this bad, and the tragedy in all of this is that despite the proliferation of media, the twenty-four-hour news cycle, the search for controversy all the time, there seems to be less engagement among the American populace than there was, say, thirty years ago. And maybe that’s because it all exists on social media, but if it exists on social media, it’s not really having an impact . . . . It’s almost as if these explosive moments are more like Snapchat. You have this picture, this protest, [and] then it disappears. And everyone goes back to the mall.

[We should] think of culture wars not just in terms of the retrenchment of rightwing values, but rather, as literally the cultural ground where we fight for life, for people’s needs, for a new world. If the cultural ground is social media, television, [and] film—if that’s it, then we’re losing more now than I think we lost in the 1990s.

Q: In Yo’ Mama’s Disfunktional!, you write, “As the global economy grows, the terrain of culture becomes even more crucial as a terrain of struggle.” I want to take this idea of a global culture war back to Freedom Dreams and ask you to talk about the notion of “freedom dreams” being transformed from an adjective and a noun to a noun and a verb. How do we make our freedom dreams go from being a noun to a verb?

Kelley: I talk about various photographers, filmmakers, and artists, and the way in which the street and public art they’re doing is not just a critique of the horrible conditions we’re facing, it’s also a new map to a different future. Collective freedom dreaming—these are the terms that have been taken up by various artists and musicians as well.

I give the example in the epilogue of how it appears in practice, especially in the cities of Jackson [Mississippi] and Detroit [Michigan], where you see artists, high school students, and community activists working together to create new forms of social life. There’s all these efforts in which artists and community people come together in a fight. They fight to create . . . to enact, I should say, this world of what “freedom dreams” would look like, these kinds of spaces, liberated zones.

Q: Talking more about this idea of poetry, culture, and imagination all being part of a revolutionary practice, people tend to think of revolutionary movements as just contending for space in political arenas. But you say it’s really the “dreams” part of it that makes that revolutionary project a reality.

Kelley: That is exactly the point, because it’s the dreams part of it that I contend is not a new thing. It’s always been the glue that sustains movements. I try to demonstrate that if we measure movements in terms of victories and losses, in terms of concrete gains versus defeats, then we’re going to miss the dream part of it. And we’re also going to miss the way in which the dream part, the vision, is not a fixed thing. It’s always dynamic, always in motion, always shifting, as movements shift, as people move in and out and try to figure out where we’re going. So trying to capture that dynamic is incredibly important.

Q: You close the introduction to the newly revised and expanded edition of Freedom Dreams with a quote from your daughter Eliza: “The power of the love letter is that it is written without the guarantee of a response.” Talk about radical social movements as love letters.

Kelley: The opposite of love is not hate, but indifference. To love truly, to love a people, to love a movement, to love freedom, is to love without the expectation that there’s reciprocity.

We are living in a political age where everything is based on exchange—solidarity is somehow supposed to be like a market economy. What it means to be a revolutionary is to fight for those who may not fight for you. It’s about learning to fight for others. And I know that’s a hard thing to do in this age of pessimism, but we have a long history, and, hopefully, the book demonstrates this, that we have a long history of fighting for others—even people we’ve never seen before. If we could learn to do that, then we could actually learn to love. Politics should be based on that, not on reciprocity.

[Norman Stockwell is publisher of The Progressive.]