In Vancouver, Indigenous Communities Get Prime Land, and Power 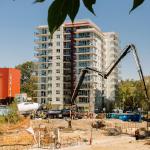 VANCOUVER — The newest players in Vancouver’s never-ending real estate drama don’t come from across the Pacific or from south of the border. They are the area’s oldest inhabitants, ensconced in this corner of Canada since long before what they call “contact” with European colonizers — and they had long been bystanders as a hyperactive market created fortunes and turned the city into the country’s priciest.

Vancouver’s three local Indigenous communities, called First Nations in Canada, now find themselves in an unusual position. As owners of vast tracts of prime land in a major metropolis, they are courted by developers and poised to continue shaping a city that has been transformed in recent decades by money from Hong Kong and mainland China.

“In the past, we were looking in windows just to be a part of things — we’re now at the table,’’ said Wilson Williams, a councilor and spokesman for the Squamish Nation, which broke ground this month on an 11-tower, 6,000-unit residential project called Senakw on 11 acres across English Bay from downtown Vancouver.

How the Squamish, as well as the Musqueam and Tsleil-Waututh nations, got to the table is the result of decades-long legal battles and a tentative union among the three communities over competing land claims. It is also part of the ongoing process of national reckoning and reconciliation over the brutal treatment of Canada’s Indigenous population, which was highlighted again last month by Pope Francis’s apology for his church’s role in that history. 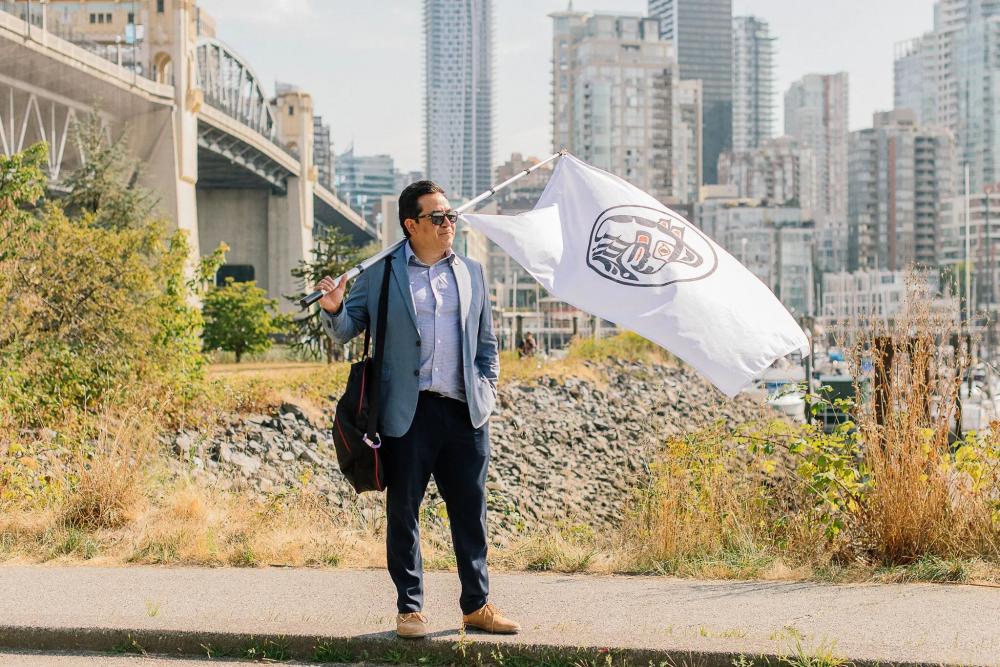 Wilson Williams, a spokesman for the Squamish Nation, at Senakw, a development site near downtown Vancouver. Credit... Alana Paterson for The New York Times

Like their counterparts in the rest of North America, the city’s three Indigenous communities, who altogether number about 7,500 people, were dispossessed of their ancestral lands. But there was a key difference: the authorities in British Columbia never bothered to sign treaties in exchange for most of the Indigenous-held territories.“The British governor came here and just started taking land away and giving it to his friends without any kind of agreement with local nations,’’ Kennedy Stewart, the mayor of Vancouver, said in an interview. “If you’re applying English common law, you can’t just take people’s land without authority, and so that really set the groundwork for everything.”

“The British governor came here and just started taking land away and giving it to his friends without any kind of agreement with local nations,’’ Kennedy Stewart, the mayor of Vancouver, said in an interview. “If you’re applying English common law, you can’t just take people’s land without authority, and so that really set the groundwork for everything.”

British settlers starting taking land from Indigenous communities in Vancouver, beginning in the 1880s and through the 1920s. Now, following decades of court battles, governments have returned or sold back land to the three communities — who have now become, according to the mayor, the “largest developable landowner in this city and probably in the metro area.”

The First Nations have also been given preference as the federal or provincial governments have sold off land they no longer use, including a former military site and the headquarters of the Royal Canadian Mounted Police, where the First Nations are building two new developments.

The First Nations have financed land purchases through loans from the federal government or from banks, sometimes in partnership with private developers eager to build on some of the last swaths of prime land in Vancouver. 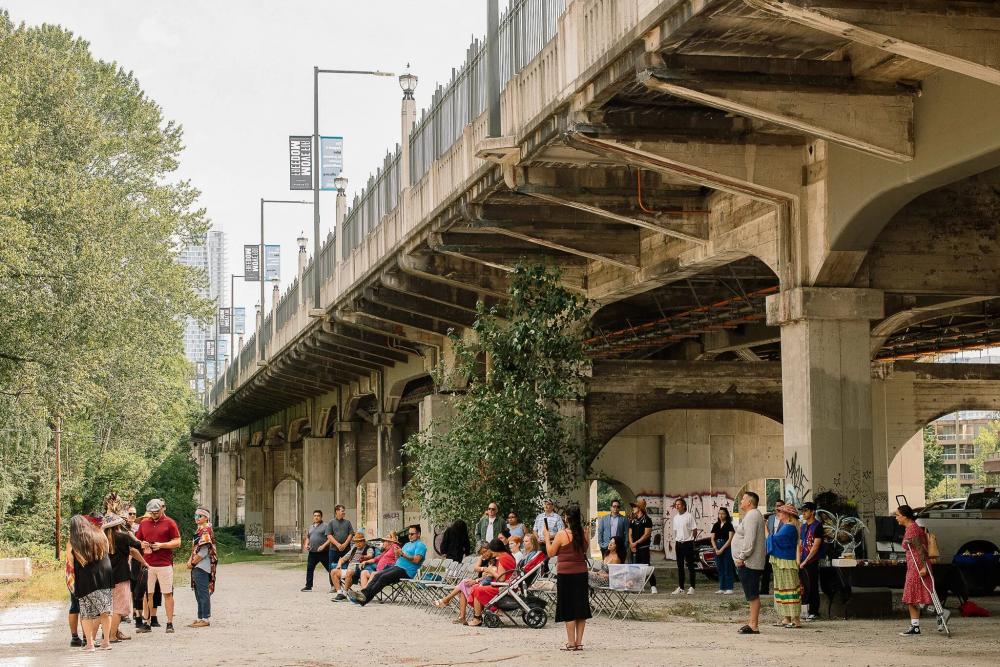 Ian Gillespie, the founder and chief executive of Westbank, a major developer involved in Senakw and other Indigenous projects, said that the developments were much more than a real estate story, but one about achieving true reconciliation through the three nations’ acquisition of power.

“Reconciliation isn’t about recognizing what happened and saying, ‘That’s terrible, I’m sorry, let’s move on,’’ Mr. Gillespie said, adding that things will change only when Indigenous communities get power. “Power can come in different forms, but economic power is probably top of the list.’’

“When it comes to real estate in Greater Vancouver, it’s our Microsoft, our Tesla,’’ added Mr. Gillespie, who is not Indigenous. “And so if you can put the First Nations at the center of that, then they are in a position of power.’’

Besides the Squamish-led project called Senakw, the Musqueam Nation has already built about 40 percent of a 1,250-unit development on 21 acres near the University of British Columbia. Called Lelem, its public spaces feature Musqueam art and designs. 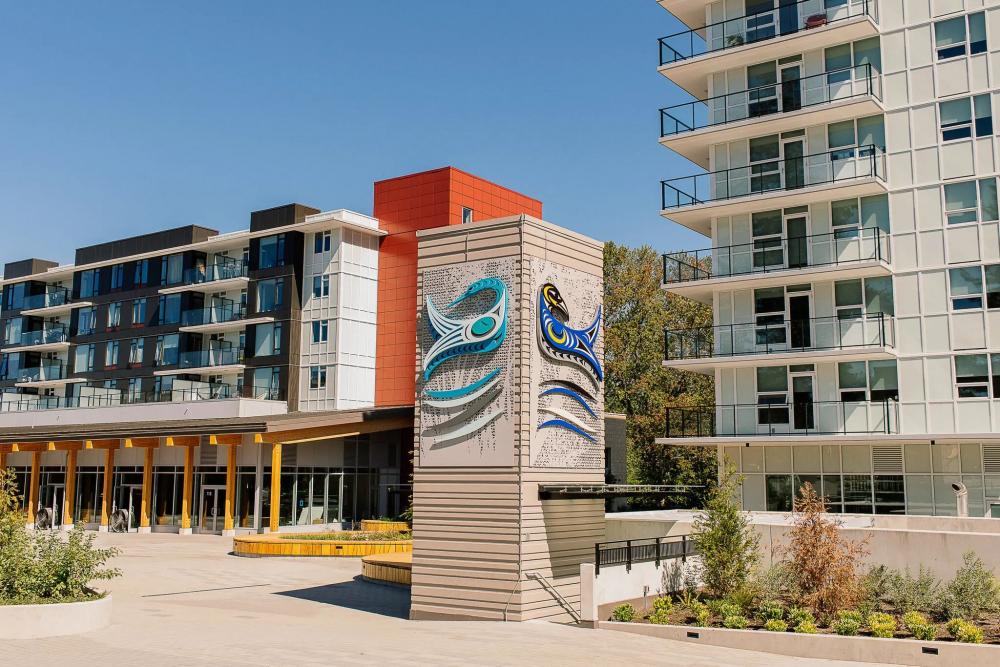 But the two projects will be dwarfed by one to develop 90 acres of one of Canada’s most valuable oceanview pieces of property, known as Jericho Lands in West Point Grey, a wealthy neighborhood with beaches and mountain views. The three Indigenous communities are developing Jericho, a former military enclave, together after buying back federal and provincial land under a jointly-owned company formed in 2014, MST Development.

In all, the three communities separately or together have acquired about 175 acres in metro Vancouver in the past eight years, said David Negrin, the chief executive of MST. They are currently negotiating to acquire about a further 100 acres of land on 14 sites from the provincial government and two from the federal government in metro Vancouver, Mr. Negrin added.

“If you look at the land they’ve got back, it’s nothing compared to the land they had,’’ said Mr. Negrin, a high-profile developer hired by the three communities to run MST.

While the communities must now mostly purchase back land they once owned, paying market rates, leaders are pressing for a simple return as another step toward true reconciliation.

“The nations are moving in that direction now, that they’d like to get more of their land back and not pay for it,’’ Mr. Negrin said. 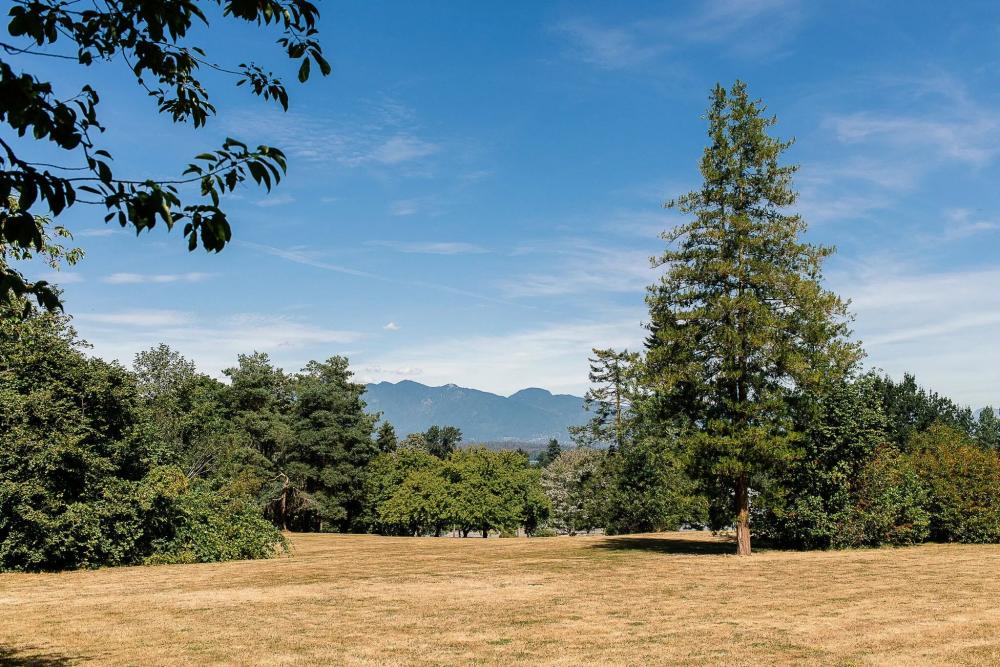 Jericho Lands, a 90-acre site in West Point Gray, a wealthy neighborhood, will be developed jointly by the Musqueam, Squamish and Tsleil-Waututh Nations. Credit...Alana Paterson for The New York Times

Only in Vancouver have Indigenous communities had so much success.

Across Canada, Indigenous communities have land claims in many other major cities, said Ginger Gosnell-Myers, a former urban and Indigenous planning expert with the Vancouver city government and now a fellow at Simon Fraser University.

“Cities everywhere in this country had First Nation villages that settlers came and stole,’’ said Ms. Gosnell-Myers, a member of the Nisga’a and Kwakwaka’wakw nations. “We don’t have cities across this country by divine intervention. They are there because they were the easiest places to occupy.’’

Outside Vancouver, few Indigenous communities have succeeded in reclaiming a major piece of city land — in great part because of competing claims by different communities over the same territory, Ms. Gosnell-Myers said.

“Other First Nations with overlapping land claims are not working together, but Musqueam, Squamish and Tsleil-Waututh are, and this is making them unstoppable,’’ she said.

Unity among the three nations took decades to achieve, and they still don’t take it for granted. In fact, claims by the Musqueam and Tsleil-Waututh over the 11 acres now being developed by the Squamish contributed to the delay of a final court ruling.

According to First Nation leaders, unity emerged in the past decade following a series of unexpected events.

The three communities, along with the Lil’Wat in Whistler, realized the value of working together in helping host the 2010 Winter Olympics in Vancouver.

“That’s when the conversations started,’’ said Mr. Williams, the Squamish councilor whose ancestral name is Sxwíxwtn. “Why the four nations? Because the Olympics are on our land, and we were able to put politics aside to be able to work with everyone.’’ 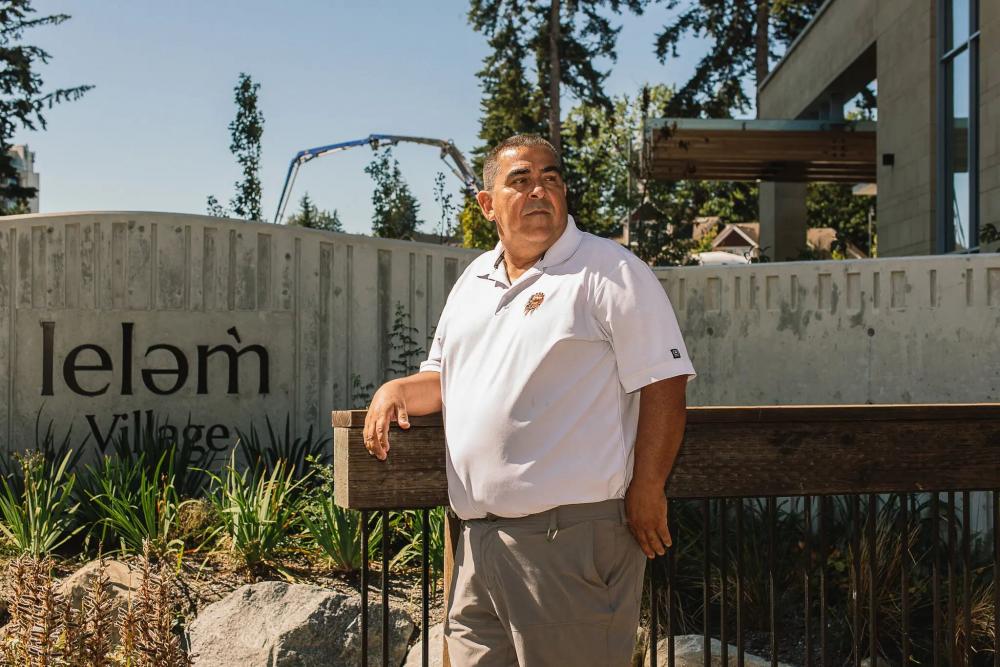 Chief Wayne Sparrow of the Musqueam Nation at Lelem, a Musqueam-led development near The University of British Columbia. Credit...Alana Paterson for The New York Times

Around the same time, members of the three Vancouver communities came together at an emotional funeral for a baby with family ties to all three nations, said Wayne Sparrow, the chief of the Musqueam Nation.

“But when it came to the land, there were always disputes,’’ said Matthew Thomas, economic development officer of the Tsleil-Waututh Nation.

After some “arm-twisting,’’ the three communities agreed to work together on some parcels of land, including the 90-acre Jericho, Mr. Thomas said.

They left unsettled the ownership of other pieces of land. 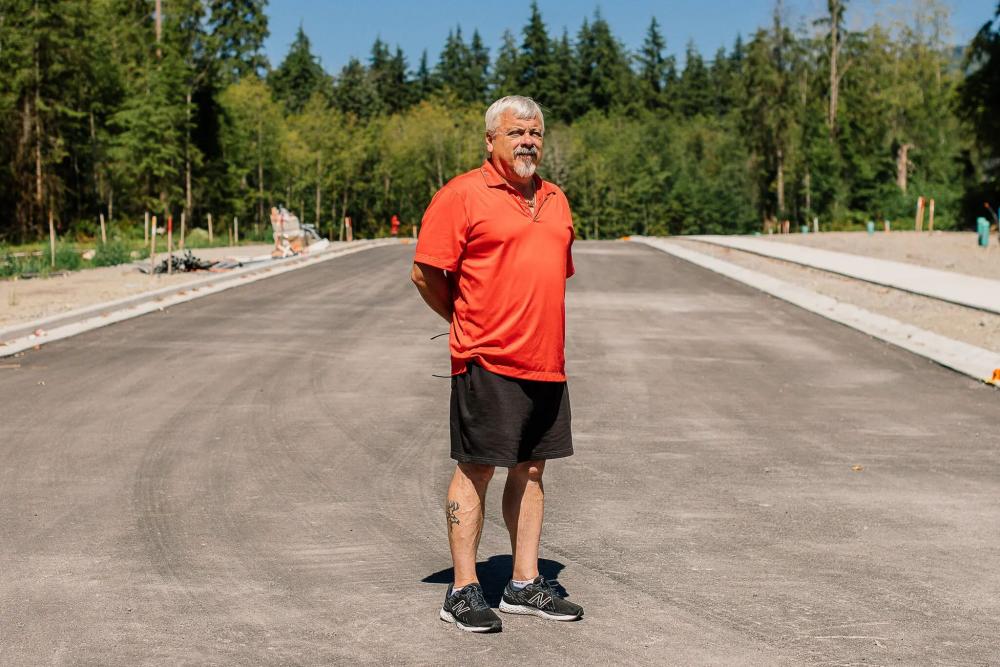 “So there’s still a lot of work that needs to get done,’’ Chief Sparrow said. “It’s not as rosy as everybody thinks it is.’’

Still, the tentative union allowed the creation in 2014 of MST Development and the purchase of 52 acres of the Jericho Lands, in co-ownership with Canada Lands, the federal government’s real estate arm. MST then purchased 38 acres from the province on its own. It also signaled that the three communities were now a force to reckon with in real estate.

“I got a lot of knocks on the door in the last four years, especially with the profile of MST taking shape,’’ said Stephen Lee, the chief executive officer of Musqueam Capital Corporation, the First Nation’s business arm.

For Indigenous leaders, used to being “out of sight, out of mind’’ in Vancouver, the developments gave them “a sense of being at the table in the past couple of years,” Mr. Williams said.

Vancouver Magazine placed the three communities at the very top of its list of 50 top power brokers early this year, pointing out that the City Council agreed to rename a street — named after the province’s first lieutenant governor whose racist policies harmed the city’s original inhabitants — following a request by the Musqueam.

Some Indigenous leaders said that this newly acquired power was difficult to grasp because their communities had yet to reap the benefits. Chief Sparrow said that perceptions of the communities had begun to change, in part thanks to the magazine ranking.

“It’s very helpful, being recognized to have that amount of power, especially with business,’’ Chief Sparrow said. “Big business people in Vancouver kind of looked and didn’t really acknowledge First Nations. Now, while the government has the legal obligation to consult and accommodate First Nations, I think the business world is getting to that stage.’’

Norimitsu Onishi is a foreign correspondent on the International Desk, covering France out of the Paris bureau. He previously served as bureau chief for The Times in Johannesburg, Jakarta, Tokyo and Abidjan, Ivory Coast.

A version of this article appears in print on Aug. 24, 2022, Section A, Page 4 of the New York edition of the New York Times with the headline: Indigenous Communities Acquire Prime Land, and Power. Order Reprints | Today’s Paper | Subscribe