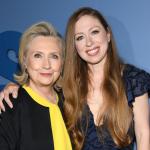 To be fair, Gutsy, a new Apple TV original series starring Hillary and Chelsea Clinton, is not as horrible as I expected. Given Hillary Clinton’s awful decades-long record as a conservative force within the already-moribund Democratic Party, I expected that watching her talk to allegedly “gutsy” women for hours on end would be unmitigated torture.

And let’s be clear: some of it is.

First, let’s talk about the gruesome framing. Gutsy? The word, I would argue, is infantilizing and cutesy, even a bit sexist in its hyperfeminization of its subjects. It could be an okay, perhaps even endearing, adjective to describe a little girl defying a schoolyard bully, but falls so awkwardly short of honoring the impressive women featured: scholars, writers, activists, performers, supermodels, all of whom deserve better.

But this brings me to the genuine pleasures of Gutsy: the people are genuinely fascinating. The show allows us to follow the Clintons as they eat moose soup with indigenous activist and supermodel Quannah Chasinghorse and her mother, Jody Potts-Joseph; walk through a Met exhibition on Seneca Village and Afrofuturism with theorist Kimberlé Crenshaw; go bowling with comedian Wanda Sykes; crochet with two women whose adult children were murdered by racists; and party with Symone, a winner of RuPaul’s Drag Race, in Little Rock, Arkansas.

On Gutsy we also meet the women who, as children, stood up to the segregationists to integrate Little Rock Central High School; trans YouTuber Natalie Wynn; a whiskey-drinking eighty-eight-year-old Jane Goodall; a couple of former white supremacists who are now anti-fascist activists — and many more brave and brilliant individuals. All this happens partly due to the Clintons’ extraordinary access — people want to talk with Hillary Clinton and are flattered by her regard.

But to her greater credit, Clinton is a solid interviewer, asking questions that prompt people to tell engaging stories and reveal themselves. She is also willing to share her own feelings and experiences; when interviewee Reverend Whittney Ijanaten says that leaving her own marriage was the gutsiest thing she ever did, and asks why Hillary stayed with Bill, the two have a remarkably candid and provocative conversation about love and relationships, and even whether partners should always reveal infidelity.

Chelsea, by contrast, is an embarrassment, interjecting comments that don’t advance the conversation but merely show off how conscious she is, especially on matters of race. When comedian Amber Ruffin mentions being the first black woman on Saturday Night Live, for example, Chelsea eagerly interrupts her: “What year was that?” It was 2014. “Not that long ago!” she crows righteously, relishing the callout and the opportunity to enlighten. She seems to exist as a constant reminder of our culture’s veneration of unearned privilege. Not that we need any reminders (viz., the past week of mourning for a worthless foreign monarch).

Much of the content of Gutsy sits uneasily with Hillary Clinton’s own well-documented politics and record in ways that are rarely acknowledged. In the criminal justice segment, for example, interviewees repeatedly lament that our system focuses on punishment, rather than on providing people who have made mistakes with rehabilitation and community support. No one, of course, mentions Clinton’s own role in advocating for crime legislation that lengthened sentences and greatly increased mass incarceration.

Climate activists are benevolently praised on the show for giving us hope, while the role of a person who held power for years in some of the institutions that have most spectacularly failed to address the climate crisis — the White House and the Senate — goes politely unmentioned.

An interesting exception is gay marriage. LGBTQ relationships play a prominent role on the show and are treated with open-hearted affection and warmth by both Clintons. But in a moving conversation with a lesbian widow on the importance of legal marriage to the bereaved person, Chelsea observes that in 2008, her mother supported civil unions but not gay marriage, a position Chelsea found awkward and inadequate. It was an honest moment — a startling one, given so many other unacknowledged points of political disconnection.

Most likely though, that (gutsy!) moment of political candor is made possible by the fact that Clinton, the Democratic establishment, and the political donor class have reached a comfortable consensus in support of gay marriage, whereas crime and climate policy remain contested within the party.

Gutsy also suffers from omissions that are, at their core, ideological. While George Floyd’s murder and the ensuing period of national awakening about racism are mentioned often throughout the show, no activists against police violence are interviewed, even though many of the most prominent have been women.

Also conspicuously unmentioned are the members of Congress known as the Squad: Alexandria Ocasio-Cortez, Rashida Tlaib, and Ilhan Omar. All of them persist with courage in face of constant racist and misogynist threats of violence. Yet they also supported, and indeed were inspired to run for office by, Clinton’s 2016 primary opponent, Bernie Sanders, against whom Clinton has been waging a ludicrous years-long smear campaign aimed at painting him as a sexist.

There are many other similar omissions. Indigenous women feature prominently in Gutsy, but the physical risks many indigenous activists have taken in defying police and the fossil fuel industry to block pipelines — that is, their actual gutsiness — is not discussed by the Clintons or their subjects. No women currently organizing unions or opposing military adventures overseas appear on the show, despite remarkable examples like Brittany Ramos DeBarros, a soldier who was threatened with a court martial when she spoke out against America’s wars in Iraq and Afghanistan, or Catholic nuns who have chained themselves to military bases demanding peace.

Of course, “gutsiness” is a broad frame, and one can’t possibly include all the examples in the world. My point is not to pick on the Clintons for failing to include specific people. It’s simply to point out that Clinton’s own politics, including her long record as a warm ally to capital, police, and the military, end up sharply limiting the scope and range of real female gutsiness in the world that the series is able to showcase.

The exceptions almost jarringly prove my point. One labor activist appears on Gutsy — the legendary Dolores Huerta, now ninety-two — but the interview centers not on her defiance of the agriculture industry, but the heroics of being an activist while raising eleven children.

Angela Davis makes a cameo on Gutsy, too — not in an interview, but a photo of her is shown onscreen. You might be surprised to see the Clintons acknowledging a black communist, but Davis is pretty gutsy! She was on J. Edgar Hoover’s Most Wanted list, and has been fired for her politics, jailed in connection with an armed takeover of a Marin County courtroom, and has written many books calling for the abolition of the prison industrial complex. All of this is captured in poignant detail.

That’s a joke, of course. In reality, nothing about Davis’s politics or biography is included in Gutsy. She’s only mentioned, briefly, for one reason: her natural hair.

While it does take a certain kind of guts for black women to defy white standards of beauty, just as it does for a woman to escape an abusive marriage, or climb Mount Everest, or for her to be queer, or try to be funny in public — some examples of courage featured on the show — the fact is, women are capable of much more. The show’s narrow political lens tends to reinforce the faintly demeaning pat on the head implied by the dreadful title, suggesting approval of women who show spunk, but not those who challenge capitalism or state power. By the end of the eight episodes, it’s clear that the bravest women in the world today are too gutsy for Gutsy.