‘This Is an Old Story of Heroism, of Feminism’: The Truth Behind the Woman King 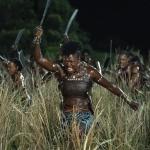 When French soldiers tried to colonise the west African kingdom of Dahomey, they encountered a foe unlike any they had faced before. The Agojie were known for raiding villages, taking captives and cutting off the head of anyone who resisted. And they were made up entirely of women.

“The French were shocked,” Professor Leonard Wantchekon, a leading Agojie scholar, says by phone from Princeton University in New Jersey. “They knew about them before but they didn’t know they were such effective soldiers, so brave, so strong.”

That France, supposedly the cradle of the Enlightenment, was backward in its essentialist views of gender is just one of the political blows landed by The Woman King, a new $50m historical epic that tells the Agojie’s story, though most of the characters are fictional.

The film is made largely by women and features an almost entirely Black cast. It is directed by Gina Prince-Bythewood and stars Oscar winner Viola Davis as a general who trains the next generation of fighters. Davis told the Reuters news agency: “It’s our story. There is no white saviour in the movie. There’s none. We save ourselves.”

The Dahomey kingdom, in the west African that region that is now Benin, was established around 1600 and grew strong from both its military prowess and from capturing and selling hundreds of thousands of people from neighbouring tribes and nations to the transatlantic slave trade. It fell in 1894 after war with France led to its eventual colonisation.

In Dahomey culture all official roles – from financial advisers to religious leaders to military generals – were balanced by both a male and female leader. The king would bestow the title of Kpojito, or Woman King, on a female reign mate.

Wantchekon, who was born and raised in Benin and served as historical adviser on the film, says: “What is very unique is social norms in Dahomey were very gender inclusive. Girls played with boys and took part in any activity that boys are involved in, which is farming and trading, cultural activities. There had always been a strong sense of equitable gender norms and representation of women in government.”

The Agojie, one of the first all-female military units in history, are thought to have been created by Queen Hangbe, daughter of King Houegbadja. She rose to power in the early 18th century after her twin brother Akaba died under mysterious circumstances. A 100ft statue of Hangbe was erected in Benin earlier this year.

For a long time women constituted only 5% or 10% of the military but that changed under King Ghezo (played by John Boyega). He expanded the Agojie from about 600 to roughly 6,000.

Wantchekon continues: “In 1818 it was extended, institutionalised with a systematic process of recruitment, training and representation in government decision making to a point where, during most of the 40-year reign of King Ghezo, anywhere from 30% to 35% of the armed forces were women.

“At the same time, key positions in government like prime minister, justice minister, interior minister, were gender balanced: you’d have the female office and the male office. Also traditional religions had very strong representation of women.”

The women proved their mettle on the battlefield against foes domestic and foreign. Europeans dubbed them “Amazons”, evoking the warrior women of Greek myth. One British traveller, observing the women train by scrambling over acacia thorns, wrote: “I could not persuade myself that any human being, without boots or shoes, would, under any circumstances, attempt to pass over so dangerous a collection of the most efficiently armed plants I had ever seen.”

Wantchekon comments: “The training process was very rigorous. They were physically imposing. They selected women known for their courage, level of independence and bravery. Women were very active but they didn’t come from nowhere.

“This institution is the result of social norms in Africa. It’s because women were raised in those communities to be independent, to be brave, to be strong. That’s what made it possible for this situation to arise. And also, you needed some degree of institutional sophistication to be able to take this to this level.

“You see any of the pictures of those women, what they were wearing, how they were trained, what they have accomplished; it’s a combination of strong social norms that are gender inclusive and being highly sophisticated in the way that they built the army, the way they trained their soldiers.”

Wantchekon, who had a member of the Agojie in his extended family, points out that they are not as historically remote as they seem – Nawi, the last known surviving Agojie with battlefield experience, died in 1979 at more than a hundred years old. “In 1970, those women that many consider as mythical figures, a few of them were still alive.”

Before Hollywood called, Wantchekon had already been working on 51 biographies of the warrior women, visiting the places where they lived and died and speaking to their descendants. He plans to write a book and make a documentary that will keep their memory alive and remind Benin, and the world, of what is possible outside the prison of patriarchy.

“It’s important to stress how unique this was,” he reflects. “Even now, it’s hard to imagine such a situation existing anywhere: that people trusted women at that level and that the society prepared women to actually play this role, which was the most dangerous, the most risky and the most important function in society at the time. Having such a high level of participation of women, up to 35%, is just exceptional.

“But one of the tragedies is that when the French took over the kingdom, when they defeated the Dahomey, not only did they ban the Agojie but also they basically prevented women from moving up in public service, in government, in educational opportunities. As a result, you have decline not only of the Agojie but also of the status of women in that region. That is really the tragedy of the whole situation.” 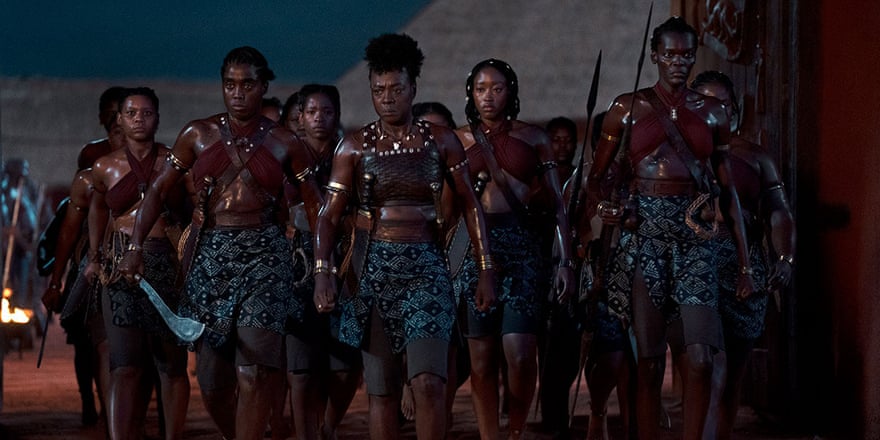 A still from The Woman King. Photograph: Ilze Kitshoff/© 2021 CTMG

France, a nation where the Catholic church drew strict gender boundaries and where women did not gain the right to vote until 1944, claimed to be “civilising” Africa but imposed patriarchy. When the colonial power needed recruits from Benin in the world wars, it assumed only the men could fight. As former US president Barack Obama has noted: “Progress doesn’t travel in a straight line. It zigs and zags in fits and starts.”

Dahomey gained full independence from France in 1960 and changed its name to Benin in 1975 but the colonial legacy hangs heavy. As of February 2021, only 8.4% of seats in parliament were held by women. Wantchekon hopes The Woman King can raise international awareness about the need to bend the moral arc back towards justice.

“You still find very strong, independent, entrepreneurial women in that area – I can give you the example of my own mother – but for this to be transformed into real advancement for women you need to double up on educational opportunities, on support for women’s entrepreneurship and women’s representation in government.

“For instance, there are 77 mayors currently in Benin and only four are women, which is unimaginable, given the history of the place. For me what is clearly important is not just celebrating this exceptional institution that existed back then but also to try to correct the wrong that had been done for centuries.”

He adds: “If you look currently for very highly successful, strong women in academia, in business, in politics, you are going to find them more in Nigeria and Senegal than Benin. Those are the kind of debates that we really need to have and I hope that the international community does its part in helping to achieve. This unique institution belongs to the world; it doesn’t just belong to Benin.

“The efforts that we need to put in place to help that area, Benin in particular, to regain the lost ground in terms of women’s rights and opportunities is something that has to be done collectively, that has to be done not only by the government of Benin but also by the international community. So I don’t want simply to be talking about how incredible this has been; we need to keep the legacy of those women alive.”

The Woman King, set in 1823, has earned comparisons to the Marvel blockbuster Black Panther, which takes place in the fictional African nation of Wakanda and features a reimagined version of the Agojie, the Dora Milaje. To prepare for the shoot in South Africa, Davis and fellow cast members Thuso Mbedu, Lashana Lynch and Sheila Atim spent months weightlifting and fight training so they could perform their own stunts.

Gus Casely-Hayford, presenter of the BBC TV series The Lost Kingdoms of Africa, said in an email: “The Agojie are not ancient history. These are groups that may have established themselves in the 17th century, but these are traditions that seemed to survive intact into the 20th century.

“And that special endurance does not just speak to the powerful and painful impacts of European settlement and economic encroachment in west Africa, or the growth of the transatlantic slave trade or even the fierce regional rivalries between Indigenous peoples that were unfortunate outcomes of the economic instability – the root of their success lies in the sheer fearlessness and strategic brilliance of these women.”

Casely-Hayford, director of the V&A East museum and former director of the Smithsonian National Museum of African Art, welcomed the release of The Woman King. “This is a very timely moment to revisit this story – women as the drivers of family businesses, as the glue for family, as the political visionaries, as the arbiters of change across west Africa, as the continent’s quiet heroes. This is an old story of heroism, of feminism, but a story that also feels very current.”