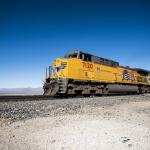 The threat of a paralyzing rail strike was narrowly averted on Thursday through last-minute labor negotiations by the Biden administration. There are many political and economic reasons to feel enormous relief (assuming the accord gets ratified by union rank and file). But it hardly means the nation’s rail system is in good health.

Before this week, most Americans probably had little idea that they remain so utterly dependent on rail freight; about one-third of all freight in the United States travels by rail. As much as that is, it isn’t enough. To the extent rail freight could be made to displace trucks, that would greatly reduce America’s carbon footprint. Trucks belch out nearly 10 times as many greenhouse emissions per ton-mile as trains.

But rail freight’s market share isn’t expanding; it’s shrinking, and rail service is getting crappier, because the financiers who control the industry expect an obscenely high return on investment. At its heart, that’s what this week’s labor dispute was about. It’s time to think about nationalizing rail freight.

The power flexed this week was that of labor, not management, making this look like a story about unions. And yes, the 12 rail unions involved in these negotiations, representing workers for Class I railway companies (the biggest), possess more clout than we’re accustomed to seeing in the labor movement. Like dockworkers, rail workers are immune to the erosion of the U.S. manufacturing base because it doesn’t really matter where the goods they move originated or where they’re going. Consequently, like dockworkers, railway workers earn excellent pay. Last year, the median hourly wage for railway workers was about $31, compared to a median hourly wage for autoworkers of about $25. Median total compensation (wages plus benefits) for the Class I railway workers affected by the new agreement is about $130,000. A railway worker in their twenties with only a high school diploma or a GED can bring home a six-figure salary.

On Wednesday, Labor Secretary Marty Walsh convened the labor negotiations that produced the tentative agreement. I’ve been critical of Walsh, but this is a clear victory for which he deserves credit, along with Deputy Labor Secretary Julie Su and the White House economic team, including President Joe Biden, who reportedly was involved directly in the negotiations. (Transportation Secretary Pete Buttigieg and Agriculture Secretary Tom Vilsack also played a role.) The agreement includes a 24 percent pay increase over five years plus a $5,000 bonus, and it’s retroactive to 2020 because the rail workers have been working without a contract for three years.

Money wasn’t the sticking point. A Presidential Emergency Board proposed the 24 percent pay hike in July. (The unions requested 31 percent, the railroads offered 17 percent, and the emergency board split the difference.) The point of dispute was that the railroads were imposing Dickensian work rules governing time off. Workers were required to be on call 24/7. If they declined an assignment, they lost points. The workers started with about 30 points. If they took a sick day, they lost (according to a 2021 Union Pacific document) between three and eight points. If they declined an assignment for some other reason, they lost 10 points. If they burned through all their points within a 90-day period, the workers were subject to disciplinary proceedings.

The unions were demanding more predictable schedules. They were particularly incensed that workers were penalized for doctor visits and medical procedures—during a Covid pandemic, no less. In the end, the railroads agreed to an additional paid day off and to allow workers to go to the doctor or get a medical procedure done without having to forfeit points. The points system itself, though, remains in place.

Perhaps you’re wondering—and if you aren’t, you certainly should be—why an industry that’s supposed to pride itself on predictable schedules for train departures and arrivals can’t produce predictable schedules for its workers. You probably have some quaint picture in your head—perhaps the Stage Manager in Our Town, examining his pocket watch as Shorty Watkins, down at the depot, watches the Albany train pull in. Passenger service still operates like that (or is supposed to), but not freight. Freight schedules are pure chaos, and the railroads aren’t willing to employ enough workers to make that chaos even minimally functional. Instead, the railroads cut the Class I workforce by 29 percent over the past six years, a net loss of about 45,000 employees.

The culprit is something called Precision Scheduled Railroading. PSR is a system dreamed up in 1993 by the late E. Hunter Harrison, who at the time was chief executive of CSX Corp., the legacy company of the old Chesapeake & Ohio Railway. PSR isn’t about predictable schedules. It’s about moving freight cars on a just-in-time basis. The idea is that you move freight cars as they arrive in the depot, rather than waiting to accumulate a great many freight cars to move in a single, long train. “This approach eliminates variability,” according to a Union Pacific P.R. document, “allows for more precise supply chain management, and results in more consistent transit times.”

That’s the theory. In practice, according to the Presidential Emergency Board, since the advent of PSR, trains have gotten longer, averaging 9,500 feet as opposed to 7,000 feet, and nearly one-third less frequent. Shippers are paying more, and labor costs are falling as employment dips. Consequently, profits are up. Way up.

PSR, wrote House Transportation Committee Chair Pete DeFazio last year in Fortune, “is not some fancy optimization strategy to increase freight volume or improve operations and reduce emissions; rather, it is a business strategy promoted by Wall Street to boost short-term profits.” The railroad companies have been Wall Street’s plaything throughout their half-century decline. Financiers endlessly pull rail companies apart, recombine the pieces at random, and sell off rights of way whenever possible. (Those rail-to-trail bike paths don’t come free.) The Class 1 railroad BNSF, for instance—a.k.a. the Burlington Northern and Santa Fe Railroads—is owned by Warren Buffett’s Berkshire Hathaway. Even for a “value investor” like Buffett, who shuns PSR, running a railroad today isn’t about moving freight; it’s about pushing costs down and revenues up.

The result has been that railroads—railroads!—were, as of 2019, the most profitable industry sector in America, according to the American Journal of Transportation, with a profit margin of 51 percent. By comparison, real estate (the selling of the world’s most finite resource, land) ranked number two at 41 percent, and tobacco (an addictive substance) was number three at 31 percent.

Railroads are more profitable than the banks that control them. But to be clear, it’s the banks that are in charge, not the railroads. The trains are an afterthought.

Since 2004, railroad profits have increased 676 percent and railroad stock prices have increased 1,250 percent. This is the sort of return more commonly associated with criminal enterprises. “Profit margins can’t rise further,” wrote Bloomberg Opinion columnist Thomas Black last month, “without inflicting even more damage on customers and workers.” That was Bloomberg Opinion talking, not the Daily Worker.

Philip Longman of the Open Markets Institute points out that the federal government didn’t just stand by when the nation’s railroads were built back in the mid-nineteenth century. Taxpayers subsidized their construction in exchange for charters requiring railroads to serve all customers on equal terms. Today these charters go unenforced. The Interstate Commerce Commission, which President Bill Clinton closed down in 1995, regulated train routes and schedules, something that President Jimmy Carter decided was unnecessary when he deregulated trains along with airplanes and trucks in the 1970s. It was an interesting experiment. It failed.

Writing last year in The Washington Monthly, Longman suggested that the railroads might be ripe for nationalization. There’s a precedent for doing so in times of national emergency, which is a fair description of our current climate crisis; President Woodrow Wilson nationalized the railroads during World War One. Alternatively, Longman suggests, we could nationalize only the tracks. That would not, he noted, be “all that different from how the Interstate Highway System works.” America’s train tracks are in terrible shape. If the federal government acquired them and then brought them up to the level of U.S. highways, maybe high-speed passenger rail, a technology widely available in Europe and Japan for four decades, could finally arrive on these shores. (Don’t talk to me about Amtrak’s Acela, which theoretically can do 150 mph but typically travels from Washington to New York at a poky 70 mph.)

Clearly, we’ve got to do something. This week’s rail crisis provided a window on how dysfunctional the American railroad industry is. By the time Wall Street’s done picking over the bones, there’ll be nothing left. Labor’s threat to shut down rail freight was a cry for help. Let’s save our railroads while they’re still there.

Timothy Noah is a New Republic staff writer and author of The Great Divergence: America’s Growing Inequality Crisis and What We Can Do About It.

The New Republic was founded in 1914 as an intellectual call to arms for public-minded intellectuals advocating liberal reform in a new industrial age. Now, two decades into a new century, TNR remains, if anything, more committed than ever to its first principles—and most of all, to the need to rethink outworn assumptions and political superstitions as radically changing conditions demand. Visit The New Republic website to subscribe or donate.