Most Republicans Support Declaring the United States a Christian Nation 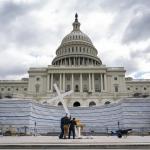 Christian nationalism, a belief that the United States was founded as a white, Christian nation and that there is no separation between church and state, is gaining steam on the right.

Prominent Republican politicians have made the themes critical to their message to voters in the run up to the 2022 midterm elections. Doug Mastriano, the Republican nominee for governor in Pennsylvania, has argued that America is a Christian nation and that the separation of church and state is a “myth.” Rep. Marjorie Taylor Greene, the Georgia hard-liner, declared: “We need to be the party of nationalism and I’m a Christian, and I say it proudly, we should be Christian Nationalists.” Amid a backlash, she doubled down and announced she would start selling “Christian Nationalist” shirts. Now Florida Gov. Ron DeSantis seems to be flirting with Christian nationalist rhetoric, as well.

Appeals to Christian nationalism have a long tradition in American history, though they have usually operated on the fringes. But the increasingly mainstream appearance of this belief in GOP circles makes sense if you look at new public opinion surveys. Our new University of Maryland Critical Issues Poll suggests that declaring the United States a Christian nation is a message that could be broadly embraced by Republicans in the midterms and 2024 presidential race. But our findings also see limits to its appeal — and over the long-term, Christian nationalism could be a political loser.

Most Republicans Say Christian Nationalism Is Unconstitutional — But Still Support It

We started by asking participants if they believed the Constitution would even allow the United States government to declare the U.S. a “Christian Nation.” We found that 70 percent of Americans — including 57 percent of Republicans and 81 percent of Democrats — said that the Constitution would not allow such a declaration. (Indeed, the First Amendment says Congress can neither establish nor prohibit the practice of a religion.)

Not surprisingly, much of the support for declaring the U.S. a Christian nation comes from Republicans who identify themselves as Evangelical or born-again Christians: Seventy-eight percent of this group support the move compared to 48 percent of other Republicans. Among Democrats, a slight majority of those identifying themselves as Evangelical or born-again Christians also backed such a declaration (52 percent), compared to just 8 percent of other Democrats.

Previous research has shown that the youngest generations — millennials (those born between 1981 and 1996) and Generation Z (those born between 1997 and 2012) — are less likely to be religiously affiliated and to trust religious institutions. That’s also consistent with the results from our Critical Issues Poll.

We found that members of younger generations are less likely than those of older generations to support declaring the U.S. a Christian nation. Only about a quarter of Millennial respondents (25 percent) and a third of Generation Z respondents (34 percent) favor this declaration. By contrast, a majority of respondents from the two oldest generations — Silent Generation (those born between 1928 and 1945) and baby boomers (those born between 1946 and 1964) support the U.S. being declared a Christian nation (54 percent and 50 percent, respectively).

Within the generations, partisanship also plays a role in shaping attitudes about Christian nationalism.

Along with age, race can also play a factor when it comes to sympathizing with Christian nationalism.

The rising threat to American democracy was made quite clear during the Jan. 6 insurrection, which featured, not incidentally, significant Christian nationalist imagery. Indeed, as our polling shows, a non-trivial number of Americans want to see the U.S. become a Christian nation— even if they acknowledge that the Constitution prohibits such a designation. Prominent Republican politicians have seized on this sentiment and are openly campaigning on a message of Christian nationalism.

Our poll results demonstrate why this message may be resonating, at least among the most ardent, religious and older base of the Republican Party. However, this strategy may be short-sighted. As our findings demonstrate, there is strong opposition to declaring the U.S. a Christian nation among younger Americans, and even younger Republicans. For that reason, the GOP may want to tread carefully or risk alienating rising generations.

Stella Rouse is professor of government and politics and associate director of the University of Maryland’s Critical Issues Poll.

Shibley Telhami is distinguished scholar-teacher, professor of government and politics, and director of the University of Maryland’s Critical Issues Poll.