How To Turn Out Young Voters in November 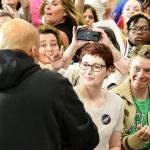 By the evidence of every known survey, today’s young Americans are the leftmost generation in many decades, perhaps in our entire history. But will they vote in sufficient numbers this fall to block a Republican takeover of the Senate and the House?

The conventional wisdom is that their pro-choice sentiments may drive them to the polls, but their economic challenges may either keep them away or even move some of them into the Republican column. A new poll by Hart Research of nine states with closely competitive Senate contests, which oversampled voters under 40 (it polled more than 800 of them), shows, however, that the Democrats can still campaign profitably on the economy, inflation notwithstanding.

Even though Republicans outnumbered Democrats in the poll’s overall sample, young voters in those states favored the Democratic Senate candidates by a 57 percent to 29 percent margin. The top three most important issues to those voters were “prices and inflation,” with 55 percent highlighting that concern; “wages and salaries that keep up with the cost of living,” with 47 percent; and “abortion,” with 43 percent.

The poll then teased out themes from that “wages and salaries” issue. Asked whether companies or workers had too much power today over the other, or whether their power was roughly balanced, 79 percent of young voters said it was the companies that had too much power, versus the 7 percent who said it was workers and the 14 percent who said the relationship was balanced. Seventy-seven percent of young voters said they’d prefer a pro-union candidate, while 23 percent preferred an anti-union candidate. After hearing a description of the PRO Act, which is the latest iteration of congressional legislation making it easier to join or form unions, 64 percent of young voters said they’d back a Democrat who supports the act, while just 22 percent said they’d back a Republican PRO Act opponent.

Singling out swing voters among the young, the way to their hearts, and to get them to the polls, Hart Research concludes, is to emphasize such messages as raising wages and salaries (which 63 percent of those young swing voters say is an “extremely strong reason to support a Democratic candidate”), and making sure that workers are not “punished or even fired” for speaking out about problems on the job (68 percent).

In other words, abortion is still a crucial issue for Democrats to stress, but there’s also some economic messaging, despite inflation, that will help turn out the young.

Coincidentally, today is the publication date of an important book aimed chiefly at progressive readers that offers a sharp analysis of the voter mobilization campaigns that enabled the Democrats to win in 2020, with particular emphasis on what worked and what didn’t in minority communities. Edited by Linda Burnham, Max Elbaum, and Maria Poblet, with essays by a host of movement activists and analysts, Power Concedes Nothing: How Grassroots Organizing Wins Elections is the best how-to guide to come out in recent years, at a moment when empirically based how-to guides have never been more important.

Harold Meyerson is editor at large of The American Prospect. His email is hmeyerson@prospect.org.  Follow @HaroldMeyerson