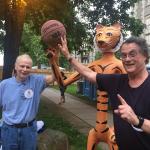 For 58 years Jeff was one of my closest friends. The intertwining of our lives from our first meeting is most remarkable.

My memory, part imagination, was wandering around the Princeton campus on the first day of my freshman year in 1964, feeling lost and totally out of place and walking right into Jeff.

That instant “collision”, turned into an instant connection – two working class guys at Princeton on basketball scholarships feeling alone. We traveled a long way since then, together, in parallel, mutually inspired, in solidarity, in touch, buddies, changing and challenging, in each other’s corner, on the phone, on the streets of Manhattan, always within reach. You couldn’t help but like Jeff, love Jeff. He had that type of charm and genuineness.

Now he is gone—but his life and work touched so many I couldn’t even begin to do that justice.

But I do know how he touched mine.

We struggled with our basketball careers and our studies at Princeton, eventually both transformed by the winds of change in the 60s as the counterculture and the anti-war movement seeped into us both and began to radicalize us.

We both majored in Psychology; I think it seemed like an easier major than the sciences.

We hitchhiked to Vassar and other women’s colleges, desperate, but unsuccessful, at meeting someone, to bring to all male Princeton for a weekend date, like all the prep school guys seemed to be doing

We worked at Camp Tonset on Cape Cod the summer of 1966 as counselors, and with Jeff’s encouragement, I made an unsuccessful (at first) attempt to pick up a beautiful woman on the beach who would eventually become my first wife.

We joined SDS our senior year, I think Jeff signed up first, and marched against the war in our first demo, in Newark.

While I taught in the South Bronx in 1968 to avoid the draft, I remember Jeff leaving the country and somehow, in Che style, hitching around South America for several months.

By the fall of 1969 Jeff was selling the Liberated Guardian on the streets of New York and visiting me regularly at my apartment on 190th St. in Manhattan. Jeff landed in Hoboken working with the Puerto Rican socialist party. We kept moving left, together.

In this tumultuous “Ocean Hill Brownsville” era in NYC, Jeff helped me figure out how to navigate the heated-up city politics surrounding the union strikes, antisemitism, race and class. Then, as I struggled in my second year of teaching, he gave me some clear advice that once again changed my life:

“Gene’” he said, after spending a day in my classroom at a neglected elementary school filled with poor and wonderful children of color, “You are part of the oppressive system by teaching here. This school is not here for learning – just for keeping these kids off the streets. You are losing the battle to be useful and helpful. (I had actually slapped a kid on the head for misbehaving, only to find that one of his parents had shot the other that morning). “You need to quit.”

Boom. It hit me in the gut – he was right. I quit shortly after that.

Jeff then had an answer to my next question: Now what? The draft was looming. “Come with me to Cuba on the March 1970 Venceremos Brigade to cut sugar cane in solidarity during ‘The Year of the Ten Million Tons.” While you are there send them postcards every day – they have to put them in your file and won’t want you after that.”

Going to Cuba changed the political trajectory of my life. We were exposed to revolutionaries from Africa, Vietnam, Uruguay and beyond, including meeting with Fidel. Our commitment to socialism and internationalism were permanently solidified.

Meanwhile, if I remember correctly, Jeff avoided the draft by disrupting his induction ceremony, jumping up and yelling about the war and handing out literature in support of the NLF.

Somehow in the 70s Jeff managed to get into the Harvard Ed school but left because of the elitism and liberal hypocrisy.

After that Jeff started working at the giant bulk mail center in Jersey City and became part of the historic wildcat national postal strike in 1978. He launched a 33-year career in the National Postal Mail handlers Union (NPMHU).

While his scholarly work was emerging, he stayed with Local 300 and by 1989 was part of a Black-led national rank and file insurgency to take over the union. (Part of LIUNA, the Laborers Union).

Not satisfied with helping to build a strong anti-racist rank and file local as Secretary Treasurer, Jeff was on an continuous mission to publicly expose the corrupt president and leader of LIUNA, Anthony Fosco, a man very few people ever choose to challenge.

Once again, Jeff changed my life, convincing the new NPMHU national leadership to hire me and my good friend Bill Fletcher to build a contract campaign for the 1990 national postal negotiations. That brought me to DC which led to many other jobs organizing with national unions, and became my home until today.

Backing up to the late 70s and eighties, while working part time at the “Bulk” as it was called, Jeff remarkably got his PHD at Columbia. During this period, he built a close relationship with Theodore Allen and invited me into Ted’s world, again a life-changing event for me.

Ted was a working-class self-educated scholar, former WV miner and union leader, who spent decades developing his research that led to the monumental, pioneering two-volume work on The Invention of the White Race. He broke new ground, starting in the 60’s, with a deep understanding of white skin privilege from a class perspective and the origin and centrality of white supremacy in understanding the history of the US working class. Knowing and loving Ted, a sweet and unpretentious man, changed my life and forever enriched my understanding of the profound connection between race and class.

When Ted died in 2005, Jeff became the executor of his works and his tireless efforts got Ted’s extensive writings out deep into the world, and his papers placed at the University of Mass, Amherst archives; appropriately, where WEB Dubois archives are preserved. (Here’s a link to Jeff Perry’s Stansbury Forum piece Ted Allen’s work: Theodore W. Allen’s Work On Centrality of Struggle Against White Supremacy Growing in Importance on 98th Anniversary of His Birth)

While at Columbia Jeff discovered the under-appreciated voice of Hubert Harrison, a brilliant early 20th century Caribbean-born writer and leader, known in his day as the Father of Harlem Radicalism, who electrified NYC during his short life. Harrison’s brilliant insights into the connections between race and class went unnoticed by history until Jeff decided to make it his life mission to find out about him and tell the world. He worked on this project until he died after completing a groundbreaking two volume work on Harrison’s remarkable life and ideas in 2021.

Not surprisingly, Jeff remained an internationalist and went with me and others in 1988 on a labor delegation to the West Bank sponsored by the Arab American Anti-Discrimination Committee. We returned and gave testimony to the Commerce Department challenging the GSP (trade preferences) given to Israel due to the extensive labor violations against Palestinian workers and trade unions. The images of Palestinians and their mistreatment by Israeli authorities were seared into our minds forever.

To say that Jeff was a central player in my life is an understatement of an understatement. One other crowning joint achievement happened in 1994 when Jeff and his wife Becky adopted their daughter Perri from China and my wife Evie and I followed shortly, adopting our daughter Nadja from Russia. Both girls were four years old. Being a father was a huge addition to both of our lives and Jeff spent decades, until his death, committed to his wonderful wife, Becky Hom while Evie and I have loved and lived our lives together to this day.

Jeff was a glorious model of a human beings. Not a man without flaws, but a man with great passion, intelligence, determination, caring, humility, generosity, and an unwavering drive toward justice.  Those wishing to honor Jeff need only to read his works on Harrison and those of Jeff’s mentor Theodore Allen and follow the powerful insights they contain to help guide our struggle.

There is a song (by ‘Just Keith and Evelyn’) “May the work I’ve done speak for me.”  I would add about Jeff, “May the life I have led speak for me”