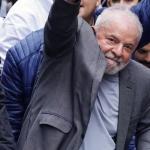 Brazil’s presidential race will need to go to a October 30th second round after former president Luiz Inácio Lula da Silva fell short of the 50%+1 he needed to avoid a run-off with extremist incumbent Jair Bolsonaro.

Brazilians voted Sunday in a historic presidential election, with leftist front-runner Luiz Inacio Lula da Silva, who led in the pre-election polls, winning but still short of the 50% he needed to avoid a runoff election.

BREAKING 🇧🇷: Lula defeats Bolsonaro in the first round of Brazil’s presidential election by over 5,000,000 votes.

There are fears the far-right incumbent Jair Bolsonaro will not accept a defeat after he warned that he will only leave office if he's "killed, jailed, or victorious" and has called on his base to "go to war" if the vote is "stolen."

Bolsonaro took an early lead as results started coming in but in 2014, when Lula's leftist party last won a presidential election, it only took the lead after two hours of vote counting. Results from Brazil’s poorer northeast, Lula's stronghold, take longer to be counted.

Lula eventually took the lead when 70.00% of the vote was counted.

We are expecting Lula to address the media soon, once the election result is confirmed. A bleak night for the left in many ways, with a succession of Bolsonarista victories and a tighter result than polls predicted. Pollsters said 50/36. Looks like ending 48/43 pic.twitter.com/DVZCLxmjoe

Read this graph! It shows the evolution of the vote count in Dilma’s election. Do NOT read the results forward. They will evolve as the count moves across the country pic.twitter.com/EE3BNfncJH

Lula went into Sunday ahead of Bolsonaro in pre-election polls with 50 percent to 36 percent, according to the final poll from the Datafolha institute.

Hundreds of politicians and journalists have gathered at a hotel in downtown São Paulo where Lula’s team is awaiting results. The atmosphere is TENSE pic.twitter.com/ywkTa1WY6q

Polls are closed in Brazil. No one doubts Lula is ahead. What is in doubt is whether Trump’s authoritarian ally—Bolsonaro—will accept defeat. This is huge issue for Brazil, and the United States. The U.S. must send a clear signal of support for democracy.
https://t.co/JpVapcPp0j

At Common Dreams, we've had enough. The 1% own and operate the corporate media. They are doing everything they can to defend the status quo, squash dissent and protect the wealthy and the powerful. The Common Dreams media model is different. We cover the news that matters to the 99%. Our mission? To inform. To inspire. To ignite change for the common good. How? Nonprofit. Independent. Reader-supported. Free to read. Free to republish. Free to share. With no advertising. No paywalls. No selling of your data. Thousands of small donations fund our newsroom and allow us to continue publishing. Can you chip in? We can't do it without you. Thank you. Please visit our web page to Donate.