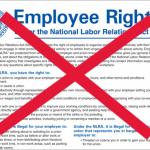 (Reuters) - In a decision that questions the National Labor Relations Board's authority to craft certain types of rules, a federal appeals court has invalidated one that required workplace posters notifying employees of their right to unionize.

The decision on Friday by the 4th U.S. Circuit Court of Appeals rejected a 2011 rule that required employers to post, physically or electronically, a notice describing workers' rights under the National Labor Relations Act.

The case was a direct challenge brought by the U.S. Chamber of Commerce and its affiliate in South Carolina. It was the second time in as many months that a federal appeals court has rejected the rule, after the District of Columbia Circuit Court of Appeals said last month the poster rule violated employers' free speech rights.

"The courts are going to look very critically at rules that are proactive, whereas I think they'll give the board more leeway with respect to rules that are reactive," Meisburg said.

The NLRB has typically used adjudication to develop labor standards instead of rulemaking, though the NLRA grants it the authority to make rules and regulations from "time to time" that are necessary to carry out the law's provisions.

When the board announced in 2010 the proposed right-to-unionization notice, it received more than 7,000 comments, many of them critical and from the business community. The final version was published in August 2011.

The poster language crafted by the board stated that employees in workplaces subject to the NLRA had the right to form and join unions, collectively bargain with representation, discuss the terms of their employment and take action to improve working conditions. Employers who did not post the notice would be found to have committed an unfair labor practice.

The 4th Circuit noted the rule was "unusual" because the NLRB has "only rarely engaged in rulemaking during its seventy-seven year history," and "never promulgated a notice-posting rule of any kind."

In rejecting the poster requirement, the three-judge panel said that it was also unique in that it anticipated a problem instead of responding to one that had been raised during an election or unfair labor practice dispute. Notifying employees of their rights was not in and of itself a part of the law the board is tasked with enforcing.

"Because the Board is nowhere charged with informing employees of their rights under the NLRA, we find no indication in the plain language of the Act that Congress intended to grant the Board the authority to promulgate such a requirement," the three-judge panel wrote.

The Chamber's Chief Counsel for Regulatory Litigation Rachel Brand said they were pleased with the result and with the broad reasoning used by the 4th Circuit.

"The board has a reactive authority, not a carte blanche regulatory authority," Brand said.

The board declined to address what effect the ruling will have, if any, on its rulemaking going forward.

"Board counsel are currently reviewing the Fourth Circuit's decision, and the Board will make a decision on how to respond at a future time," the board said in an emailed statement.

Meisburg noted that the two federal appeals courts that have reviewed the rule thus far are in agreement, and said there are no other challenges in the pipeline because implementation of the rule was indefinitely suspended until the cases were resolved.