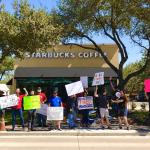 Starbucks denies that it fired a worker from Houston's first unionized store for leading organizing efforts. A spokesperson for the Seattle-based coffee giant said that Josh Deleon of the Shepherd and Harold store, located at 2801 S. Shepherd Drive, was found to have violated attendance and punctuality policies following an investigation and that his firing was not related to unionizing activities.

"No Starbucks partner has been or will be disciplined for or separated for supporting, organizing or otherwise engaging in lawful union activity," the spokesperson said. "All partners receive training on our policies and are aware that failing to uphold them can result in termination. And as always, a partner's interest in the union is not exempted from the standards we've always held, and we will continue to enforce our policies."

Starbucks workers at Houston's first unionized store held an unfair labor practices strike on Saturday to demand the reinstatement of a worker they say was fired in retaliation for leading unionizing efforts. The strike came just a week after the coffee giant's Shepherd and Harold store, located at 2801 S. Shepherd Drive, announced it had voted to form a union.

Workers at the store allege that Josh Deleon, a longtime Starbucks employee and leader of the union drive at the Shepherd and Harold store, was fired in retaliation for his organizing efforts just five days before the Sept. 21 vote to unionize. In an email interview, Deleon, who had worked for the company for nearly nine years, wrote that during the month of September, management began pulling certain employees off the floor with vague accusations of time theft, explaining that the situation was being investigated.

The level of questioning Deleon says he and others were subjected to from district managers was "very unusual," adding that after multiple conversations, the only evidence they could present to those being approached with the accusations were in regards to "a few minutes here or there over the past couple months."

"Definitely the sort of situation that, before a public petition, would most likely have been handled by a store manager, if noticed at all, and it would have a simple conversation, to give the employee a chance to explain and at most, end with possibly a verbal warning," Deleon wrote.

Deleon is one of three Starbucks workers who have been fired from stores in Texas where union organizing has taken place, according to Starbucks Workers United (SBWU). The two other workers are Jackie Kirkman from the First and Oltorf store in Austin, and Atticus Drummond from the Quincy and McCullough store in San Antonio.

"All of these workers were lead organizers at their respective stores," SBWU wrote in a news release. "Once Starbucks found out who these partners were in relation to the organizing effort, Starbucks executed a common pattern - sudden corrective-action-investigations, issuing threats, making false accusations, sudden enforcement of policy, and separation from the company."

Kirkman was allegedly told by management that she could not talk about union-related matters while under investigation, the release said. Atticus said in a statement that he believes to have been "targeted as a union leader, as my experience shows parallels to the other fired workers across the state."

Starbucks did not respond to a request for comment before publication.

The Shepherd and Harold store joined 242 unionized Starbucks stores across 33 states, and 327 Starbucks stores that have filed for union elections across 37 states. So far, nine stores in Texas have won their elections. Deleon said the Harold and Shepherd store workers want the company to respect their right as a union and to negotiate the compensation of labor and the conditions of their workplace. "They have yet to do that for any of the over 200 stores that have won a union so if we don't see that soon then we will not accept any changes to the conditions of our workplace that do not directly benefit us as workers," he wrote.

When he was first mulling the idea of unionizing in the summer of 2021, Deleon said he considered the risks that could possibly come with it, like losing his source of income, healthcare and school tuition being paid for. "I was just enrolling in school that summer using the company's [education] benefit and after stepping down as a store manager the previous year, I was reassessing long term career goals outside of Starbucks and working through a degree was a direct answer to that," he wrote.

Within the store, Deleon wrote, it quickly became clear the direction leadership was going within the company with cuts to labor. "Our previous manager was on paternity leave over the holiday season 2021, and while we did technically have an interim SM at the store to make schedules and do payroll, they also had the job from their boss above them to hire and train a staff for their store set to open before New Years, 2022," he wrote. "That meant our team was now not only neglected from leadership but also our team was used for training a team of 25 new hires set to go to a new store, meanwhile no hiring or training was done for our team."

Deleon wrote that those who didn't quit were looking for an opportunity to leave once the store manager returned from paternity leave. However, at the start of summer 2022, the store's manager abruptly quit, raising worries among workers of a repeat of the previous holiday season. "A coworker told me that they had reached out to [Starbucks Workers United] and wanted to see what I thought, knowing I'd likely support him," he wrote. "After speaking with them and other coworkers about the process, I felt a drive to help the organizing in any way I could."

The Seattle-based company is currently facing 31 official complaints from the National Labor Relations Board that include over 700 alleged violations of federal law, according to SBWU. Starbucks was recently ordered to reinstate seven fired Memphis workers who supported unionization.

Starbucks Workers United in Houston recently started a GoFundMe page to support Deleon financially. So far, the page has fundraiser has collected nearly $3,000.

Deleon writes that the unionized Houston store will continue to stand firm against pressure or intimidation from management, adding they likely did not anticipate the results of the election to favor a union as much as it did. "Which is why I was singled out along with a couple others, more than the rest of the store," he wrote. "I hope I'm the only and last employee fired from this store for union activity but if I'm not I will fight for their reinstatement the same as the union at the store and myself is fighting for my reinstatement."

Ariana Garcia joined Chron in 2021. Previously, she was a community news and breaking news reporter for the Austin American-Statesman. She enjoys binge-watching anime and films makeup tutorials in her spare time.