How ‘Fist Rice’ Became a Symbol of Korean Democracy 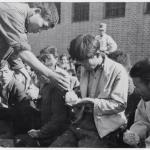 On a humid summer morning in the mountain-backed metropolis of Gwangju, a cluster of fifth graders shuffled into an auditorium at 5.18 Freedom Park. Here were the former barracks where the South Korean military dictator Chun Doo-hwan and his forces imprisoned, interrogated, tortured, and in some cases killed thousands of civilians in May of 1980.

Today, Koreans refer to these events as “5.18,” marking the first day of the Gwangju Uprising, when city residents demanded democracy in the wake of Chun’s 1979 power grab after the assassination of Park Chung-hee, the previous dictator president. The Chun regime’s brutal response still reverberates in the lives of the city’s residents.

As the young students took a breather from their field trip, a guide passed out jumbo rice balls called jumeokbap, or “fist rice.” Heavy and moist on the inside and shimmering with roasted seaweed flakes on the outside, these goodies were prepared at dawn by tossing together a tub of fresh rice, salt, and sesame seeds, then patting the mixture into soothing spheres.

The guide told the children how jumeokbap fed the democratic resistance in 1980. Even as they munched away, the seaweed-flecked kids looked deeply affected by the story of this humble snack.

Before refrigeration, cheap, quick, and non-perishable jumeokbap were a portable meal perfect for a day up in the mountains or a night in the trenches during wartime.

Today, jumeokbap can be found all over South Korea—in train stations, bus terminals, pubs, convenience stores, and even trendy restaurants in Seoul. But the version of jumeokbap with the greatest meaning is Gwangju’s rice ball, an edible encapsulation of the city’s history and moral fiber.

On May 18, 1980, some 600 students and civilians gathered at Gwangju’s Chonnam National University in peaceful protest against Chun Doo-hwan. The military dictator blockaded the city from aid and journalists, then deployed 18,000 riot police and 3,000 elite paratroopers from the “black beret” Special Forces to attack locals with bayonets, M-16s, and machinegun fire from helicopters. Anywhere from 200 to 2,000 civilians were killed in the next few days. Some individuals disappeared forever, “unknown even to rats or birds,” as the Korean saying goes. The United States, needing South Korea to remain a submissive ally in a strategic part of the Asia-Pacific region, turned a blind eye to the atrocities.

When the freedom fighters ran out of food, the city’s women and merchants set up distribution centers for jumeokbap. They emptied their kitchens and shared their last coal briquettes to steam rice in cauldrons out on the chaotic streets. The only additional ingredient was a sprinkling of salt.

During those spring days, clouded by misty rain and gun smoke, Jung Hyang-ja was a labor union sector head just shy of 30 years old. She remembers packing hot rice with her bare hands at the bustling Yangdong Market and along the thoroughfare of Geumnan-ro, where chanting throngs flowed past army tanks into the city plaza to protest.

“Even that summer, we never ate spoiled food,” Jung says, holding her head of eggplant-purple curls with pride in her office at the Gwangju Labor and Employment Center. From here, just steps from the epicenter of 5.18, Jung recalls how even the gruffest freedom fighters softened when offered jumeokbap with a side of company and conversation. No one bothered one another for names or background information. All were welcome at the hastily assembled tables. Students, laborers, and trash pickers alike felt comfortable calling the rice-packing women eomonim (mother), halmoni (granny), imo (auntie), or nuna (big sis).

But these warm moments of camaraderie were soon snuffed out. On May 27, 1980, heavily weaponized troops diverted from the Demilitarized Zone (DMZ) at the border of North Korea streamed downward to shut down the protests. For years thereafter, the Chun regime tormented the so-called rebels of 5.18, shutting down local media outlets and prohibiting

commemorations of the struggle. But the survivors kept sharing jumeokbap and memories while demanding remembrance, acknowledgment, and reparations from the government.

Gwangju remains a city of fierce democratic spirit. But after enduring decades of unemployment, brain drain, and depopulation that turned it into the second-poorest city in the country, Gwangju decided in 2019 to refresh its image in all regards, including its famous traditional cuisine.

In 2019, a city committee voted jumeokbap as one of seven foods to represent Gwangju. Other dishes on the list were hanjeongsik, an array of small plates once only enjoyed by royalty and aristocrats, and oritang, a sumptuous duck stew. Common jumeokbap earned its spot on this list for symbolizing the city’s jongshin—its mentality, energy, and spirit.

The city attempted to catapult jumeokbap from its working-class roots into the gourmet arena. Newly anointed representative businesses decorated the formerly undressed rice balls with meat and sauces, flowers and nuts, batter and leaves, and even pastel dyes.

Jung Hyang-ja shakes her head at this manufactured evolution. “We can’t let jumeokbap mutate into something that’s too pretty,” she says. For her, jumeokbap will always reflect plain, precious sustenance during desperate times.

Jung started mobilizing people to make jumeokbap again in 2001 after the Asian Financial Crisis of 1997, distributing the rice balls to local laborers who were going hungry. Ever since, she has led everything from small groups to hundreds of volunteers in making jumeokbap during 5.18

memorials, labor events, and crises. In 2014, the Sewol Ferry sinking shocked the nation and the world. Afterwards, Gwangju high school students hosted a jumeokbap tribute to raise awareness about the incident and show sympathy to the families affected by the tragedy.

Word spread about Jung’s work. Survivors of the 1980 massacre and Gwangju’s laborers began showing up faithfully to commune over jumeokbap. When Jung scaled back the event during the pandemic, she received phone calls from concerned workers and community members.

She realized then how much the people of Gwangju still depended on jumeokbap to hold themselves together.

Jung relies on people power for jumeokbap-making events and hasn’t taken a penny from the government to support her efforts. Two other 5.18 survivors by her side are Kim Eun-gyeong and Jang Hyun-jin of the Gwangju Dong-gu District Self-Sufficiency Center.

Kim was in eighth grade during 5.18. She skipped around the last corner to school one morning and found the street slick with blood. From then on, she stayed home, with cotton sleeping mats piled up against the door to protect against stray bullets. When her brother, a high school freshman, didn’t come home for two days, she and her family looked for him

downtown among the lined-up bodies draped with Korean flags. Thankfully, he wasn’t among them and returned home alive. Jang was nursing her first child during the human rights crisis. Still, she headed out each night to light the darkened streets with a torch. “I thought, if I could hold up even a single flame so these guys could hold out for one more day, I would,” she says. She has the same passion today, and still makes lunches for those in need.

The women make jumeokbap the old-fashioned way, adding only roasted seaweed for flavor. Despite their lack of glamor, the rice balls exert an immense mobilizing force. Next March, workers from labor organizations around the country will join them to plan jumeokbap distribution for the 43rd anniversary of 5.18. On the eve of May 18, 2023, the conversion of

sacks of rice into jumeokbap will begin. Then, a task force will distribute immeasurable numbers of rice balls out of stands, trucks and tents, and from there, to the people.

They will also show up at the May 18th National Cemetery, built by the Korean government in 1997 to lay the dead from the uprising to rest. Organizers hope that the simple snack will help people remember the spirit of democracy that animated Gwangju in the spring of 1980, and

honor the brave people murdered by the regime.

The event’s success depends upon the return of the pre-pandemic volunteer force, especially the city’s youth. But it is increasingly difficult to get anyone to contribute time and labor without compensation. “The young’uns don’t know firsthand the desperation and the urgency we felt

back then,” booms Jang, raising her voice and her fist. “We can’t lose the jongshin from that time. That’s why we’re going to keep going forward no matter what!”

In recent years, some businesses have developed jumeokbap-themed snacks and breads, some even wrapped in replicas of 5.18-era letters to sell as gifts and souvenirs. But the recent global appeal of jumeokbap seems to be the in-person connection that the food facilitates.

Foreigners visiting Gwangju often attend events to taste and make jumeokbap with survivors and locals. In some cases, the snack and its meaning have made their way abroad. Korean community organizations in Los Angeles commemorate 5.18 in May, as do Koreans living in other parts

Jumeokbap makers and 5.18 commemorators also credit the Hallyu Wave —the global influence of Korean popular culture—for the rise of foreign interest in the city. For example, there’s the phenomenon of fans of the KPop boy band BTS visiting Gwangju, because member J-Hope (Jung Hoseok) hails from the city and shouts out to it in the 2015 song “Ma City.”

This has piqued the interest of the Commemorative Event Committee for the May 18 People’s Uprising. “Of course, we’ve talked about it,” both Executive Director Byun Jae-hoon and Secretary-General Kim Mi-gyeong exclaim, in regards to their fantasy scenario in which J-Hope would appear at a 5.18 commemoration. But they understand that doing so could expose

the star to political scrutiny. Rather than looking for star power, the committee is more focused on providing interactive events at which community members and visitors can make jumeokbap together.

One haven for 5.18 survivors, the May Mothers’ House, already provides jumeokbap-making experiences for group tours visiting Gwangju. The sunlit space, built in 2014, serves women who lost a husband, son, or brother in 5.18, or were injured themselves. Here, the women share food,

songs, and memories. They also partake in art and exercise classes to aid the lifelong process of healing from unimaginable loss.

Kim Hyung-mi, the eighth representative director of the house, was in her first year of high school in 1980 when her brother, a college freshman, died in helicopter gunfire aimed down at protestors. The fact that the military shot at people from the sky was acknowledged only after a special investigation conducted in 2018.

To Kim, jumeokbap, made by squeezing many grains of rice into one unit by concerned and helping hands, not only represents jongshin, but also jongshin gye-seung—spiritual inheritance—and daedong jongshin—the will to achieve peace and prosperity together.

Last May, the House held a public jumeokbap sharing event at the city’s USquare intercity bus terminal to show support for Myanmar during its ongoing democratic struggles. In the same spirit, in 2020, Gwangju gifted jumeokbap to the people of Daegu, a city on the eastern side of the peninsula, when taking in their overflow of COVID-19 patients. More and more, Gwangju is using jumeokbap as an emblem of good will and diplomacy.

Kim says that as 5.18 witnesses age, their stories are more critical than ever. She hopes that younger generations can come away from learning about the tragedy with a heightened sense of communal responsibility. Making, sharing, and eating jumeokbap, then, is a way for

survivors to pass on their memories.

Visitors to the May Mothers’ House find numerous women open to sharing conversation and belly laughs. Often, a guest will receive a pin of a Gwangju woman in hanbok traditional dress. The back of the pin doubles as the shape of a unified Korean peninsula.

Interestingly, the pose of the woman on the pin mirrors that of the Statue of Liberty, a famous symbol of freedom and goodwill. Like Lady Liberty, the woman has a torch held high in one hand. Unlike the New York City icon, she balances a basketful of rice on her head in lieu of a crown. Kim Hyung-mi, holding the pin, gestures with her eyes at the rice.

Gastro Obscura covers the world’s most wondrous food and drink.

Sign up for our email, delivered twice a week.