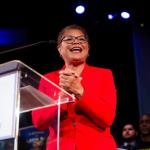 Karen Bass, a veteran Democratic congresswoman, on Wednesday became the first woman elected as mayor of Los Angeles after pledging to build coalitions in a metropolis torn by racial tensions and fed up with homelessness. The race was called by The Associated Press.

Ms. Bass survived a bruising race against Rick Caruso, a billionaire real estate developer, that had remained too close to call for more than a week after the election. Mr. Caruso had pumped roughly $100 million into his campaign as a law-and-order candidate, hoping to appeal to a frustrated electorate.

On Wednesday, Los Angeles County election results showed her with more than 53 percent of the vote, with returns trending heavily for her.

“The people of Los Angeles have sent a clear message,” Ms. Bass said in a statement on Wednesday. “It is time for change and it is time for urgency.”

Ms. Bass’s election comes at a tumultuous moment in Los Angeles, a city of 4 million people that emerged from the pandemic to a landscape of tent camps, debris, economic anxiety and spiking violence. Although matters have gradually begun to improve and crime rates remain far below the city’s peaks of the 1990s, Los Angeles residents have expressed fury and exhaustion, particularly at the city’s epidemic of homelessness, according to surveys, focus groups and pre-election interviews.

In an interview last year at her hillside home — a ranch house in the Baldwin Vista neighborhood that was burglarized in September by thieves who stole two handguns — Ms. Bass, 69, said that the main reason she ran for mayor was the familiarity of the current civic unease. She said the city’s mood reminded her of the fear-stoked distrust and divisiveness that preceded the 1992 riots.

“That’s what is frightening to me now — the anger,” she said. “And my concern is the direction the anger can move the city in.”

Understand the Outcomes of the 2022 Midterm Elections

Ms. Bass has said that as mayor she will declare a state of emergency on homelessness and find housing for 17,000 homeless people in her first year. She also has promised to put more police officers on the street, in part by freeing up sworn members to patrol the city rather than handle administrative tasks.

She will bring to the job a long history of coalition-building, dating to the 1980s, when as a physician assistant and emergency room worker she applied for a federal grant to launch a nonprofit to address the crack epidemic that was ravaging the city. The Community Coalition for Substance Abuse Prevention and Treatment — now known simply as the Community Coalition, or CoCo — has since become one of the city’s largest and most influential advocacy groups, working across the city’s vast array of ethnicities.

Ms. Bass said on election night that her very family is a kind of coalition. Married for six years in the 1980s, Ms. Bass and her ex-husband, a Latino, went on after their divorce to jointly raise their daughter with his four children. Ms. Bass’s stepchildren spoke lovingly of her at her campaign kickoff rally.

Her biological daughter and son-in-law died in 2006 in an automobile accident, two years after Ms. Bass first was elected to public office. The tragedy, she has said, made her part of a “club that you didn’t ask to be a part of,” and left her with “a choice as to whether to go back to work or hide.”

In a Democratic stronghold so liberal that Senator Bernie Sanders of Vermont received the most Los Angeles votes in the 2020 presidential primary, Ms. Bass will bring a liberal perspective to the nonpartisan office.

As a child during the civil rights movement of the 1960s, she said, she grew up watching demonstrations on the news with her father, a mail carrier, and volunteered to walk precincts for Robert F. Kennedy, who was assassinated not far from where she grew up. In the 1970s, she joined a group of young leftists working on construction projects in Fidel Castro’s Cuba, the Venceremos Brigade.

By California standards, however, she is viewed as more center-left than progressive. As assembly speaker during the 2008 financial crisis, she worked with the governor at the time, Arnold Schwarzenegger, to negotiate billions of dollars in deep cuts to balance the state budget. In Congress, where she has served since 2011 and was chairwoman of the Congressional Black Caucus, she has represented a district that spans affluent West Los Angeles and some of the city’s poorest quarters. She was shortlisted as a running mate by Joseph R. Biden Jr. during his presidential campaign.

She will be the city’s second Black mayor, taking office nearly three decades after Tom Bradley retired as the longest-tenured executive in Los Angeles history. And, as the first woman to be elected to the post, she will join an increasingly female pantheon of local leaders, including the city’s first female city attorney and the county’s powerful, five-member Board of Supervisors, which is dominated by women.

Ms. Bass said in the interview last year that she welcomed the opportunity to work with so many women in powerful positions.

“These are general statements, OK? But women are more collaborative. Women are not as transactional. And I think women focus on different issues,” she said. “I think women tend to lead differently.”

For much of the mayoral campaign, Ms. Bass was the front-runner, with polls showing her to be the best known candidate by far in a crowded primary field. But that changed with the late entrance of Mr. Caruso, 63, a deep-pocketed Brentwood businessman who had developed some of Southern California’s best-known shopping destinations and served on powerful boards overseeing the Los Angeles Police Department and the University of Southern California.

The race was the first mayoral contest since the city’s decision to hold local elections at the same time as the statewide general election, and the first to follow a state law that provides every registered active voter with a mail-in ballot. The two changes dramatically broadened interest in the municipal election, and Mr. Caruso’s spending set records in the city, not only for campaign ads but also for phone banks, precinct walkers and other voter-turnout efforts.

In the final weeks, polls showed the officially nonpartisan race narrowing substantially. Ms. Bass, however, garnered numerous high-profile Democratic political endorsements, including one from former President Barack Obama. She also criticized Mr. Caruso for stances that he argued were only tangentially related to the limited powers of a mayor in the city — his belated switch to the Democratic Party, for instance, and his past contributions to conservative candidates who opposed abortion.

In a statement on Wednesday, Mr. Caruso wished Ms. Bass “Godspeed” and congratulations. “There will be more to come from the movement we built,” he said, “but for now as a city we need to unite around Mayor-elect Bass and give her the support she needs to tackle the many issues we face.”

Ms. Bass has said she will look to mend relationships when she enters office in December. The City Council is reeling from a series of scandals, including the leak of an audio recording in which a group of Latino members were caught making disparaging and racist remarks, several of which were directed at African Americans.

Also on the horizon are preparations for the 2028 Olympics, which Los Angeles is hosting, and the possibility of a painful economic downturn in a city with limited options for raising revenue.

She will have a powerful bully pulpit in her new post, but also significant constraints; Los Angeles government was designed to resist the concentration of authority. County officials oversee many of the social service programs necessary to address homelessness, for example, and any regional initiatives will require the broader buy-in of scores of surrounding cities and other levels of government.