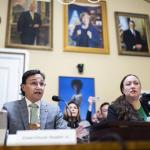 In 1835, John Ridge, one of the chief negotiators of a treaty between the U.S. federal government and the Cherokee Nation, wrote to the governor of Georgia insisting that the treaty include a provision allowing a Cherokee delegate to serve in Congress.

“If you fail to obtain for us the right of being heard on the floor of Congress, by our Delegate, let the Bill perish here, without the trouble of submitting it to our people only to be rejected,” Ridge wrote. “But how can I find words to convince my people of the liberality and friendship of the U.S., when at the outset this right, which would have rendered them a great people, is denied by Congress.”

Congress approved the Treaty of New Echota later that year and included the provision for a Cherokee delegate. And then, as with so many other promises to and agreements with American Indians, the U.S. government ignored its commitment. Nearly two centuries later, Congress is taking baby steps toward righting that wrong.

“Today, I come before you to remind you of the promise the federal government made to our ancestors,” Chuck Hoskin, the current principal chief of the Cherokee Nation, told the House Rules Committee on Wednesday. “I ask the House of Representatives to honor this treaty right, fulfill its obligation under the treaty, and seat our delegate.”

Nearly two centuries after the American government pledged to allow the Cherokee Nation representation in Congress, the committee held a hearing on the issue in the first step towards seating a delegate. Hoskin quoted Ridge’s letter in his opening statement, a reminder of how long this issue has lingered unattended.

Hoskin said that a Cherokee delegate would be “similarly situated” as current delegates from American territories such as the U.S. Virgin Islands and Guam: able to sit on committees and introduce bills, but not able to vote on the House floor. The Cherokee Tribal Council confirmed Kimberly Teehee as the nation’s delegate to Congress in 2019 in accordance with the treaty. Teehee is a former adviser to President Barack Obama on Native American affairs who also worked as a congressional staffer for several years.

President Andrew Jackson signed the Treaty of New Echota, which culminated in the displacement of thousands of Cherokees from their homeland to territory west of the Mississippi River, a forced removal now known as the Trail of Tears. The treaty, which was opposed by most Cherokees, including its principal chief, gave them $5 million in exchange for seven million acres of land. It also promised federal representation for the tribe—a commitment that remains unfulfilled 187 years later.

“The Cherokee Nation having already made great progress in civilization and deeming it important that every proper and laudable inducement should be offered to their people to improve their condition,” the treaty says, condescendingly, “as well as to guard and secure in the most effectual manner the rights [guaranteed] to them in this treaty, and with a view to illustrate the liberal and enlarged policy of the Government of the United States towards the Indians in their removal beyond the territorial limits of the States, it is stipulated that they shall be entitled to a delegate in the House of Representatives of the United States whenever Congress shall make provision for the same.”

It has taken nearly 200 years for the Cherokee Nation to push forward on this issue, Hoskin said during the hearing, because of the great hardships that the nation has experienced at the hand of the federal government, and the consistent need to rebuild. “When we get to our new homeland, in what would later become Oklahoma, we are simply trying to survive and rebuild a great society,” Hoskin explained. “We are now, I think, in a position where we can as a practical matter assert this right, whereas my predecessors in the two centuries before—frankly, we were just trying to hang on to our way of life and rebuild.”

There are a few options for Teehee or any other Cherokee delegate to be seated, according to a July Congressional Research Service report. The “option least likely to raise constitutional concerns,” according to the CRS, is for Congress to create a seat for a Cherokee delegate through the ordinary legislative process (passing a bill through both chambers and getting the president to sign it). No legislation has been introduced on the topic so Wednesday’s hearing was a small but important first step.

Congress has handled such situations through legislation in the past. The House has a half-dozen nonvoting members from U.S. territories: five delegates (from the District of Columbia, Guam, the U.S. Virgin Islands, and the Commonwealth of the Northern Mariana Islands, all of whom serve two-year terms) and a resident commissioner, from Puerto Rico, who serves a four-year term.

Hoskin and the Cherokee Nation argue that the Senate has already voted on the issue, in 1835 when it approved the treaty; Hoskin told me in an interview after the hearing that the issue has now been “placed squarely in front of the House.” The House could take action alone by passing a resolution to adjust its standing rules to allow a new delegate to be seated. But CRS notes that the standing rules of the House expire at the end of each term, meaning that such a grant would have to be approved every two years; moreover, adding a delegate without the input of both chambers could “prompt a legal challenge to that action’s validity.”

Hoskin said he’d find it “breathtaking” if the House changed the standing rules to allow a delegate to be seated, and then did not renew that action in the subsequent term. “I’m a tribal leader, I know my history, I know the United States has broken a promise or two,” Hoskin acknowledged during the hearing. “But I think in the twenty-first century, when this House of Representatives seats Kim Teehee, there won’t be a Congress that will dare break that promise to the Cherokee Nation.”

Multiple other tribes have argued that they are also entitled to nonvoting representation in Congress if a delegate from the Cherokee Nation is seated, citing its own centuries-old treaties. Mainon Schwartz, a legislative attorney for the Congressional Research Service, noted during Wednesday’s hearings that some of the language in these treaties are more dependent on congressional action than the Treaty of New Echota. “The language of the Treaty of New Echota is the clearest of the treaties between the United States and various tribes,” Schwartz said.

Hoskin told me after the hearing that, given her experience, Teehee would be able to represent the general interests of Indian Country even as she is specifically a delegate for the Cherokee Nation. “There’s so much that Indian Country shares in terms of overarching goals,” he said. Moreover, it “opens the door” to examining other treaties between the U.S. and different tribes, which could be a step towards larger atonement, Hoskin argued.

In a rare example of bipartisan agreement in a highly polarized political era, Representative Tom Cole of Oklahoma, the ranking Republican on the Rules Committee, agreed with Massachusetts Democratic Representative Jim McGovern, committee chairman, agreed that Congress should act. “I think it’s never too late to do the right thing,” Cole, a member of the Chickasaw Nation, said during the hearing. “It’s not as if something that happened 150, 170 years ago can’t be addressed and corrected now.”

McGovern told me that he wasn’t sure whether seating Teehee could occur before year’s end, but he indicated that passing a resolution to change the standing rules would be easier than enacting a law. “A statute would have to go to the House and Senate, and the Senate moves at a snail’s pace,” McGovern said. “I’m on board, but I don’t know where everyone else is. I’ve got to make sure that we’ve got the votes to pass it before we move it.”

Cole told me after the hearing that some House members have “institutional” concerns because Teehee was approved by the Cherokee Tribal Council, as opposed to a popular vote. “An item of great pride amongst most members is that people can’t get appointed to the House of Representatives,” Cole said. “They’ve got to be elected. That’s true in the territories as well.” But, he continued, the concern had been discussed in the hearing; Hoskin suggested that the issue was worthy of deference to the Cherokee Nation, whose constitution dictates how delegates are selected.

House Speaker Nancy Pelosi called the hearing “a key first step” toward honoring the government’s commitment. “The Democratic House remains committed to correcting the profound injustices of the past, living up to the federal government’s treaty obligations, fully embracing our trust responsibility and building a brighter, fairer future for the Cherokee Nation and all indigenous peoples,” she said in a press release.

The committee hearing on Wednesday was largely friendly, with members agreeing that addressing the issue was long overdue. “I personally believe that Delegate Teehee should be seated,” McGovern said in his closing statement, calling it the “right” and “moral” thing to do.

“I feel very encouraged and optimistic about the hearing in part because it was productive, and because it was historic,” Hoskin told me after the hearing, saying it was the first congressional examination of the Treaty of New Echota since its ratification, and another step towards getting Teehee seated. “We are getting closer to what I think has to be an inescapable conclusion.”

Grace Segers is a staff writer at The New Republic.

The New Republic was founded in 1914 as an intellectual call to arms for public-minded intellectuals advocating liberal reform in a new industrial age. Now, two decades into a new century, TNR remains, if anything, more committed than ever to its first principles—and most of all, to the need to rethink outworn assumptions and political superstitions as radically changing conditions demand. Visit the TNR website to subscribe.