With a Nod to ‘1984,’ a Federal Judge Blocks Florida’s Anti-‘Woke’ Law in Colleges 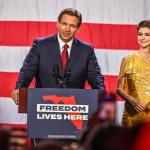 "The State of Florida's decision to choose which viewpoints are worthy of illumination and which must remain in the shadows has implications for us all," Walker wrote. "But the First Amendment does not permit the State of Florida to muzzle its university professors, impose its own orthodoxy of viewpoints, and cast us all into the dark."

The legislation, previously called the Stop W.O.K.E. Act – the acronym standing for "Wrongs to Our Kids and Employees" – is now known as the Individual Freedom Act. DeSantis signed the bill into law this spring; it initially took effect in July.

The bill prohibits schools and workplaces from any instruction that suggests that any individual, by virtue of their race, color, sex or national origin, "bears responsibility for and must feel guilt, anguish or other forms of psychological distress" on account of historical acts of racism. The bill also forbids education or training that says individuals are "privileged or oppressed" due to their race or sex.

Critics say the bill is designed to prevent schools and workplaces from discussing racism. In August, a group of eight Florida professors sued representatives of the state higher education system over the bill, calling the legislation "racially motivated censorship" aimed at stifling "widespread demands to discuss, study and address systemic inequalities."

Critical race theory is a decades-old academic framework that examines how racism helped to shape institutions and traditions that exist today.

The idea was once confined to law school seminars. But over the past two years, the term has become a catch-all shorthand for a variety of conservative bugaboos: workplace diversity trainings, protests over police brutality and high school history lessons.

DeSantis began pushing for the bill last December. "In Florida we are taking a stand against the state-sanctioned racism that is critical race theory," he said in a press release announcing the proposal. "We won't allow Florida tax dollars to be spent teaching kids to hate our country or to hate each other."

The bill is one of the most strident state legislature entries in the conservative culture wars over schools. Florida lawmakers passed it alongside the Parental Rights in Education Act, called the "Don't Say Gay" bill by critics, which bans classroom instruction involving sexual orientation or gender identity in kindergarten through third grade.

In his order, Judge Walker, an Obama appointee, opened by reciting the first sentence of 1984, George Orwell's novel about life under a futuristic totalitarian government.

"'It was a bright cold day in April, and the clocks were striking thirteen,' and the powers in charge of Florida's public university system have declared the State has unfettered authority to muzzle its professors in the name of 'freedom,'" the judge wrote. "This is positively dystopian."

Thursday's ruling is the second legal setback for the law. An August ruling, also by Walker, blocked another part of the bill that targeted workplace diversity practices. The law faces another challenge by K-12 teachers.

DeSantis' office is expected to appeal the decision.

Becky Sullivan has reported and produced for NPR since 2011 with a focus on hard news and breaking stories. She has been on the ground to cover natural disasters, disease outbreaks, elections and protests, delivering stories to both broadcast and digital platforms.

In January 2020, she traveled to Tehran to help cover the assassination and funeral of Iranian military leader Qassem Soleimani, work that made NPR a Pulitzer finalist that year. Her work covering the death of Breonna Taylor won an Edward R. Murrow Award for Hard News.

Sullivan has spoken to armed service members in Afghanistan on the anniversary of Sept. 11, reported from a military parade in Pyongyang for coverage of the regime of Kim Jong-Un, visited hospitals and pregnancy clinics in Colombia to cover the outbreak of Zika and traveled Haiti to report on the aftermath of natural disasters. She's also reported from around the U.S., including Hurricane Michael in Florida and the mass shooting in San Bernardino.

She previously worked as a producer for All Things Considered, where she regularly led the broadcast and produced high-profile newsmaker interviews. Sullivan led NPR's special coverage of the 2018 midterm elections, multiple State of the Union addresses and other special and breaking news coverage.

Support the stories you love and empower the journalism our country depends on NPR. In return, enjoy sponsor-free listening (and bonus episodes for select podcasts) — because you deserve it.