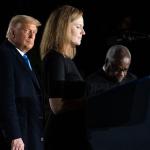 The attack on Paul Pelosi validates the fears that Americans have about post-insurrection political violence sown by Trump and his supporters: election deniers, neo-Confederates, and other MAGA crazies. Republican political elites are prepared to treat future incidents with the same thoughts-and-prayers callousness showered on the victims and survivors of mass shootings.

In the midterms, ballot initiatives cut through partisan polarization to reveal majorities for higher wages, expanded health care access, and abortion rights. That’s why many state-level Republicans are attempting to undermine the ballot initiative process.

In Dobbs, conservatives have constructed their own crucible. Now, the agendas of many Federalist Society members will have to pass the test that Roe, in the view of the Dobbs majority, did not — the one that Republican presidents also have invoked in debates over court appointments: whether a judge is interpreting the law or making it.

Determined to challenge the all-encompassing threat of private banks, a small group in Ohio is leading a campaign to put monetary reform on the national agenda.

Antisemitism has fundamentally always been an antidemocratic ideology with popular affectations: it attempts to poison and denigrate democratic society by portraying it as racially unclean and always secretly dominated by an occult interest.

Every Election is a Climate Election
By Tom Engelhardt
TomDispatch

I find it all too unnerving that climate change didn’t make it into the midterms in any significant, or even discernible, fashion. Given how obvious and ominous our global situation already is, why did climate change not grip American voters the way abortion did? Why was the possibility of our planet becoming ever less livable not at the top of the list of issues in the 2022 midterms?

Why Esmeralda Spaulding is Leaving Harvard
By Paton D. Roberts and Eric Yan
The Harvard Crimson

Spalding described her proposal for an educational initiative called “Black Artist-Educators Decolonizing and Placemaking.” She wrote that she believes the program would help institutions and instructors “move beyond metaphorical commitments to decolonial education, Black and Native solidarity (respectively), and reparations.”