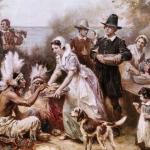 Here in the United States, we’ve all heard the legendary tale of the first Thanksgiving, when Pilgrims dined with Natives in celebration of a bountiful harvest.

It all started in November 1620, when a group of 102 English religious separatists known as Pilgrims, joined by unaffiliated commercial entrepreneurs, arrived on the shores of North America in a ship called the Mayflower, at present-day Cape Cod. They’d planned to settle in Virginia but were blown 500 miles off course.

Unfortunately, like much of U.S. history, the narrative surrounding the landing of the Mayflower, and what happened to the English settlers on board, has been whitewashed, diluted, or just plain fabricated.

On the 400th anniversary of that fabled landing at Plymouth Rock, let’s delve into the reality of this famous event by sorting myth from fact.

When the Mayflower arrived at Plymouth Rock, the landscape was devoid of human civilization.

William Bradford, leader of the voyage, declared they discovered the era “unpeopled,” but when the Pilgrims landed, Darius Coombs, codirector of the Plimouth Plantation, says there were some 70 Wampanoag communities in the area and an estimated 100,000 Tribal members whose ancestors had been living there for at least 12,000 years. European trade ships had already been visiting the region for 100 years before the Mayflower sailed, but the Pilgrims were the first who attempted to stay. In truth, upon disembarking, the Pilgrims were met with cleared fields and fresh water. The Wampanoag had moved to winter camp, but the Pilgrims were aware of ongoing Indigenous occupation because they dug up and used some of the Wampanoag’s food stores.

Pilgrims took pity on Indigenous people and fed them.

The Pilgrims had no idea how to survive in the new land. They would have starved to death during the severe 1620–21 winter if it weren’t for the Wampanoag. They shared their provisions with the colonists and taught them how to hunt, fish, farm, and preserve food in their new environment.

As Wampanoag Nanepashemet said, “We have lived with this land for thousands of generations — fishing in the waters, planting, and harvesting crops, hunting the four-legged and winged beings and giving respect and thanks for each and everything taken for our use. We were originally taught to use many resources, remembering to use them with care, respect, and with a mind towards preserving some for the seven generations of unborn, and not to waste anything.”

Thanksgiving was the name of the harvest feast Pilgrims and Indigenous people shared.

While Pilgrims did share a meal with the Wampanoag people, it wouldn’t have been possible without their Native teachers, and it wasn’t called Thanksgiving, either. Harvest feasts were a tradition that Natives had observed for time immemorial, so it is Native generosity that is the basis for the Americanized idea of Turkey Day. The origins of the holiday’s modern name are actually quite grisly. Pilgrims and other European invaders warred with the Wampanoag and other local Tribes after they settled in. An official “day of Thanksgiving kept in all the churches for our victories against the Pequots” was proclaimed by Massachusetts Bay governor William Bradford in 1637, and it was meant to memorialize the slaughter of about 700 Pequot men, women, and children.

The Indigenous people who interacted with Pilgrims are extinct.

The Mashpee Wampanoag people who first encountered the Pilgrims were subjected to centuries of disease, starvation, and war, but they survived. They still inhabit Massachusetts and eastern Rhode Island, are a federally recognized Tribe, and have about 2,600 citizens.

The Indigenous people who helped the Pilgrims aren’t being oppressed anymore.

In spring 2020, just as the Mashpee Wampanoag were getting hit with the COVID-19 pandemic, the Trump administration moved to disestablish their Reservation, threatening their very existence. A federal judge found the Trump administration’s decision “arbitrary and capricious” and ordered them to reconsider. In July, the U.S. House of Representatives passed H.R. 7608. It is an appropriations bill, but it includes an amendment that would stop the Interior Department from taking the Mashpee Wampanoag’s land. The legislation now awaits a Senate vote.

The Wampanoag are also seeking the return of the wampum belt of Metacom, one of their 17th-century chiefs. When he was killed in the 1670s, his belt was sent to King Charles II as a spoil of war. To the Wampanoag, the wampum belt is comparable to the crown jewels. Wampum is comprised of purple and white shells from whelks and quahog and plays a crucial role in the Tribe’s culture. According to the Washington Post, the whereabouts of Metacom’s belt is currently not known.

While colonization was an ugly chapter in American history, it’s over now.

Tribes in the United States are still dealing with the fallout of colonization, including the same Indigenous groups that helped the people survive.

As Malcolm X said of the Black experience in the United States, “We didn’t land on Plymouth Rock. The rock was landed on us.”

On Thanksgiving Day 1970, the 350th anniversary of the Mayflower landing, Natives took back Plymouth Rock. Frank James (Wamsutta), Wampanoag, gave a speech that discussed the suffering his people had endured after the arrival of the Pilgrims, and said that while many consider it a day of celebration, to this country’s Indigenous, it was a day of mourning. He then led a protest on Cole’s Hill near Plymouth Rock, close to a replica of the Mayflower and a statue of the Wampanoag leader Massasoit. American Indian Movement (AIM) leader Russell Means also spoke, and other AIM members boarded a replica of the Mayflower and later buried Plymouth Rock in dirt and refuse. That night, another AIM leader, John Trudell, returned and painted it red.

Since then, Natives and their allies continue to gather on Cole’s Hill in Plymouth on Thanksgiving Day to commemorate a National Day of Mourning. To many Natives in the United States, Thanksgiving is a reminder of the genocide of millions of the Indigenous ancestors and the theft of our lands because of colonialism. It’s become a way to honor our dead as well as protest the continuing racism and tyranny that we are being subjected to even now. There are still Natives who host family meals during this season, but that is because we’ve always held harvest feasts, long before the Pilgrims’ arrival.

Tribes are still under attack today. Natives live with historical trauma, crushing poverty on Reservations, a lack of adequate health care, racism, police brutality, voter suppression, little representation, an epidemic of missing and murdered Indigenous women, and toxic pipelines being forced through our lands, among other pressing issues. We are still fighting for our Treaties to be honored, for our human rights, and for our survival.

Perhaps the holiday, like this country, can be salvaged. We shouldn’t celebrate genocide, but we can honor those who were killed, elevate Native voices, and embrace that spirit of generosity that Indigenous people shared with the Pilgrims. We can feed the hungry and shelter the houseless, and fund and advocate for Native causes and organizations. We can use this day to teach history, rather than hide it. Instead of forcing schoolchildren to partake in embarrassing Thanksgiving plays based on ugly stereotypes and colonial fiction, Native speakers and historians can come and educate them about Native culture. We can make this world what we want it to be. Create a more perfect union.

This article is part of In Session: The Teen Vogue Lesson Plan. Find the full lesson plan here.