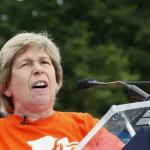 Randi Weingarten, president of the American Federation of Teachers, defended the egalitarian legacy and aspirations of public education on Monday after former U.S. Secretary of State Mike Pompeo accused her of being "the most dangerous person in the world."

"It's not a close call," Pompeo, who worked in the Trump administration and is considered a potential Republican presidential candidate, continued. "If you ask, 'Who's the most likely to take this republic down?' It would be the teachers' unions, and the filth that they're teaching our kids, and the fact that they don't know math and reading or writing."

While the news outlet failed to push back on Pompeo's absurd claims, Weingarten took to Twitter to defend her union and the institution of public education.

Admitting that she wasn't sure whether to characterize Pompeo's remarks "as ridiculous or dangerous," Weingarten noted that he defended tyrants in various parts of the world during his tenure with the State Department.

The American Federation of Teachers (AFT), by contrast, fights "for freedom, democracy, and an economy that works for all," Weingarten continued. "We fight for what kids and communities need: Strong public schools that are safe and welcoming, where kids learn how to think and work with others."

"And we fight against this kind of rhetoric and hate," she added. "Maybe spend a minute in one of the classrooms with my members and their students and you will get a real lesson in the promise and potential of America."

A recent analysis by PEN America detailed how 138 school districts across 32 states have prohibited more than 1,600 titles in classrooms and libraries since July 2021. The vast majority of banned books deal with LGBTQ+ themes, address racism, contain sexual content, or are related to activism.

In addition, according to PEN America, Republican lawmakers in 42 states have introduced more than 190 bills since January 2021 that seek to limit the ability of educators and students to discuss gender, racial inequality, and other topics—including a growing number of proposals to establish so-called "tip lines" that would empower parents to discipline teachers. Nearly two dozen educational gag orders have been enacted in more than a dozen states.

In an opinion piece published before far-right Florida Gov. Ron DeSantis signed the state's infamous "Don't Say Gay" bill, Washington Post columnist Greg Sargent argued that the GOP's tidal wave of repressive education legislation has "an obvious purpose: to make teachers feel perpetually on thin ice, so they shy away from difficult discussions about our national past rather than risk breaking laws in ways they cannot themselves anticipate."

"But there's another, more pernicious goal driving these bills that might well succeed politically precisely because it remains largely unstated," Sargent continued. "The darker underlying premise here is that these bills are needed in the first place, because subversive elements lurk around every corner in schools, looking to pervert, indoctrinate, or psychologically torture your kids."

The "combination of... vagueness and punitive mechanisms such as rights of action and tip lines" is intentionally designed to promote self-censorship, wrote Sargent. "Precisely because teachers might fear that they can't anticipate how they might run afoul of the law—while also fearing punishment for such transgressions—they might skirt difficult subjects altogether."

He added that "calls for maximal parental choice and control in schools have been used by the right for decades as a smoke screen to sow fears and doubts about public education at its ideological foundations."

"Radical republicans hate education," he said, "because it cripples their lies and fear-mongering. I stand with Randi Weingarten and all teachers in the fight for our kids, our democracy, and our planet."

American Federation of State, County, and Municipal Employees (AFSCME) president Lee Saunders, meanwhile, said in a statement that "if Mike Pompeo really thinks Randi Weingarten is 'the most dangerous person in the world,' then he is the most clueless person in the world."

"More likely, though, this is just a stunt by a politician desperate to get attention for a longshot presidential run," said Saunders. "Either way, what a relief that a man who calls an educator a greater security threat than global dictators is no longer in charge of our diplomatic relations around the world. While Pompeo continues to bluster, Randi will keep working for safe, vibrant schools that enrich our children and strengthen our communities."