What Spain Tells Us About Fighting Fascism 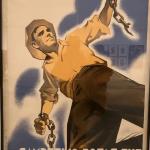 In the wake of neo-fascist coup attempts — and the ongoing threat they pose in the U.S. and Brazil — it’s worth revisiting historical analogies on how to challenge the fascist plague before it metastasizes, endangering people the world over.

The prime case study has long been Hitler and Nazism. While much of the historical lens has focused on the punitive punishments the World War I victors imposed on Germany, and then the appeasement policies by led by Britain, there’s another compelling model.

In July, 1936, a far right Spanish officer corps, soon led by Francisco Franco, launched a military coup against a democratically elected progressive government in Spain. They were abetted from the start by wealthy, large landowners in agricultural rural areas, and the conservative hierarchy of the Catholic Church.

The backdrop in an almost feudal country with massive economic disparities, was several decades of class conflict in Spain, from dictatorial rule to the establishment of an elected Second Republic, as well as militant worker uprisings, and violent clashes between the right and left.

As Paul Preston has written, the young Republic was led by leftist and moderate Republicans and Socialists, aligned with the organized sectors of the working class, who had ambitious objectives to “use state power to create a new Spain” that would require “destroying the reactionary influence of the Church and the army, more equitable industrial relations, breaking the feudal powers of the latifundio estate-owners and meeting the autonomy demands of Basque and Catalan regionalists.” 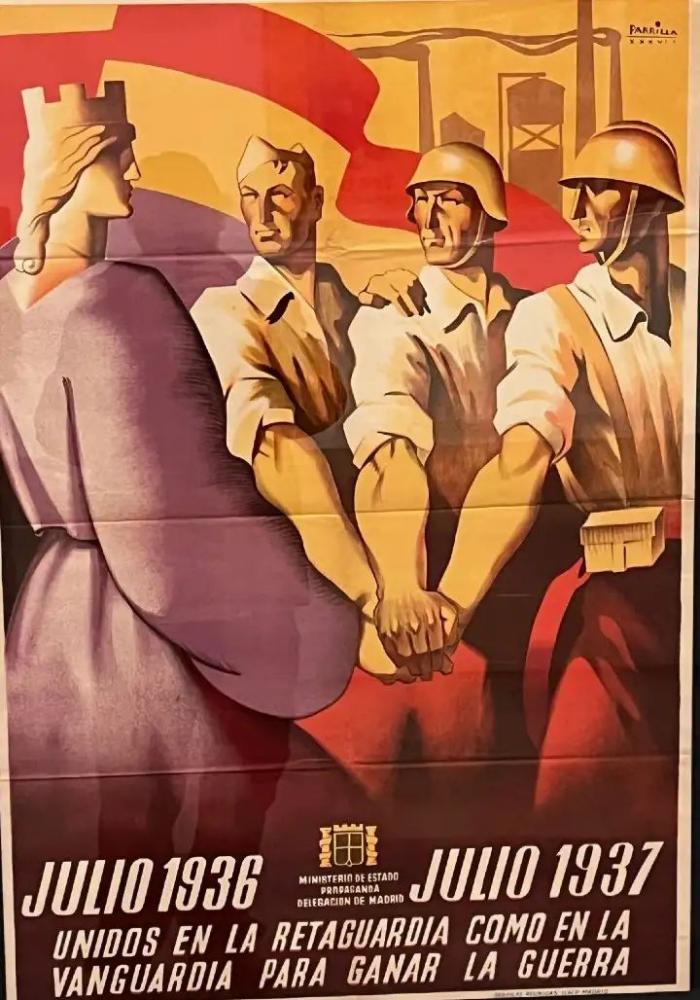 JULY 1936 - JULY 1937 Ministry of State Propaganda Delegation of Madrid. United in the Rear as in the Vanguard to win the War. One of many posters produced during the war celebrating the fight to save democracy in Spain. Credit: J.J. Parrilla

This was also the era of the rise of fascism, notably in Italy and Germany, and the ascendancy of the Bolsheviks in the Soviet Union, a global conflict that would play out in Spain. After Republican leaders regained electoral power in February, 1936, the coup plotters stepped up their planning, buttressed by their command of a highly trained, well-armed colonial African Army.

Within days of the July coup, its leaders, especially Franco, received military and logistic aid from Hitler and Mussolini and rapidly seized largely agricultural areas. But the coup was rebuffed in the largest cities — Madrid, Barcelona, and Valencia — mostly at the hands of worker and left-led militias, aided by elements of the military who remained loyal to the Republic. 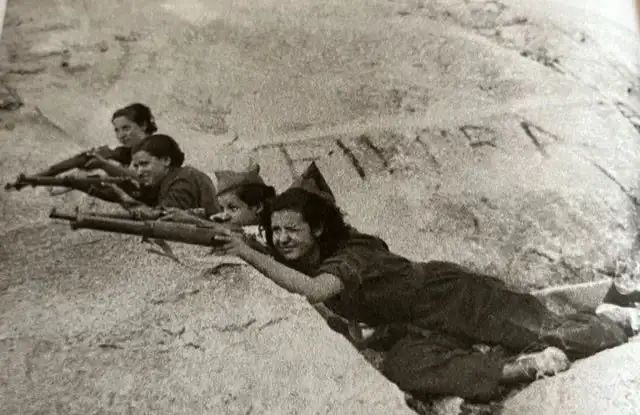 Republican women, whose rights were expanded during the Second Republic, played a major role during the Civil War, including in combat. STF/AFP photo via Getty Images

The coup plotters expected to overrun the country within days. The Civil War would last almost three years. Despite a massive military imbalance, the defenders of democracy actually could have won except for a calamitous decision by Britain, France and the U.S. to impose a “non-intervention” blockade on both sides — a position heavily influenced by Franco’s anti-communism rhetoric, substantial fascist sympathies in British ruling circles, and the propaganda of the Catholic Church, especially in the U.S., about anti-clerical actions in Republican strongholds. British appeasement policies towards Hitler and isolationist politics in the U.S. also were also significant factors.

However, Hitler and Mussolini happily provided massive assistance to Franco in the form of weapons, thousands of “volunteer” troops, and hundreds of millions in loans. Additionally, Hitler and Goering viewed Spain as a testing ground for their newly developed, advanced weaponry. German pilots carried out the first major aerial bombing on civilians in Spain, gaining experience for the death Goering’s Luftwaffe would deliver a few years later across Europe. 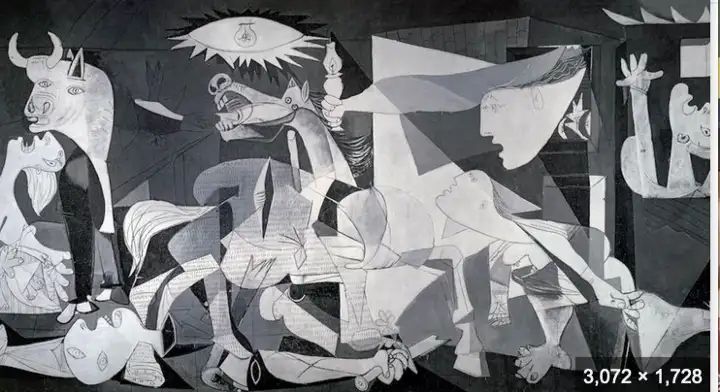 Picasso’s famous painting of the Nazi bombing of Guernica. He refused to allow it to be housed in Spain while Franco lived. It is now in a place of honor in the Reina Sofia museum in Madrid 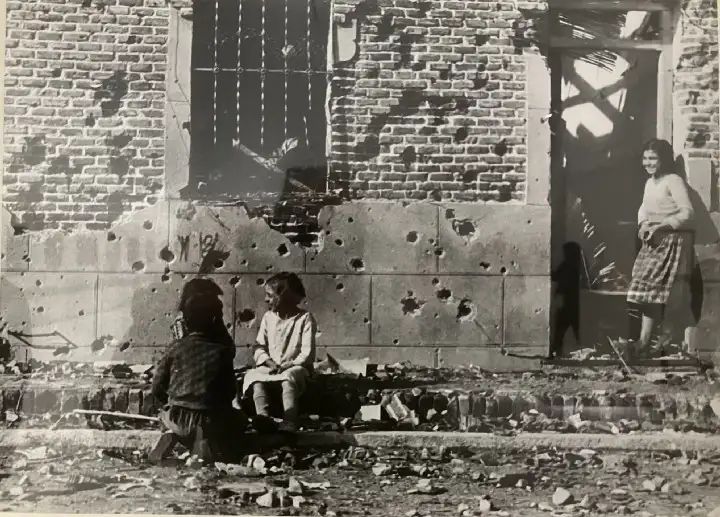 Aftermath of a bombing raid in Madrid. Robert Capa photo

While the Roosevelts, especially Eleanor, had sympathy for the Republic, they ignored a gaping loophole in their blockade, allowing shipment of supposed non-military products, that included trucks from GM, Ford, and Studebaker, Firestone tires, and especially oil supplied by Texaco, Shell, Standard Oil and others, all solely provided to Franco. Texaco CEO Torkild Rieber, a Hitler sympathizer who developed close ties with Franco, gave Franco the equivalent of $325 million in oil shipments on credit, Adam Hochschild notes.

Republican Spain was only able to buy arms from the Soviet Union, and much of their weaponry was outdated. Stalin and the Soviet Union, did provide military aid, advisers, and encouragement of the recruitment of volunteers mostly organized by Communist parties in the International Brigades. 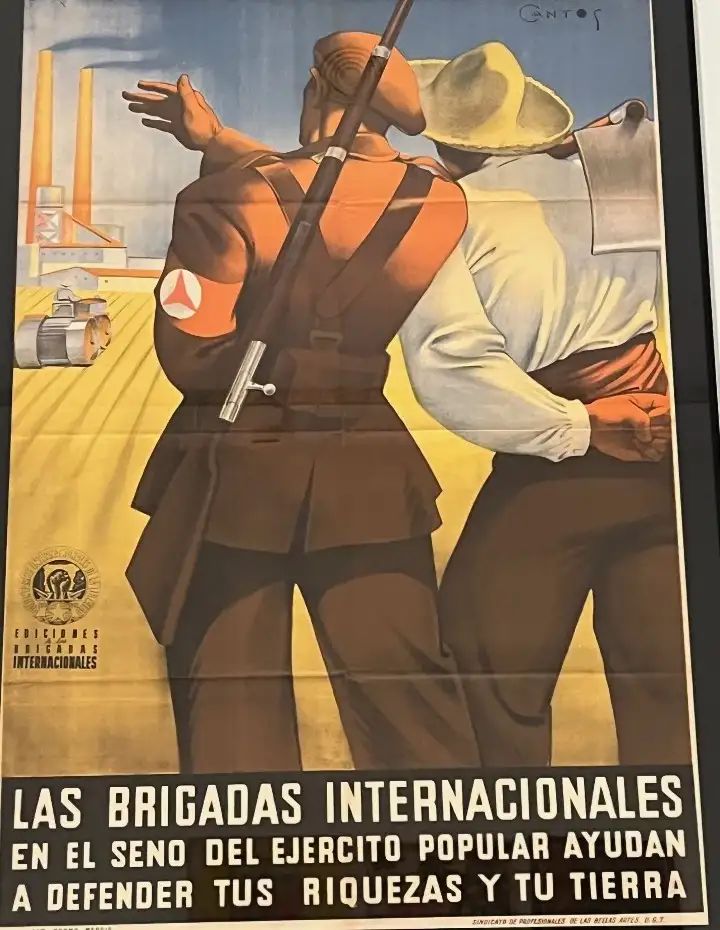 Ultimately 35,000 to 40,000 volunteers from 50 countries made their way to Spain, most of them clandestinely as it was illegal in their home countries. Most were workers, leftists, intellectuals and artists with little military training, and were ill equipped, especially compared to Franco’s army. They fought courageously, enduring enormously high casualties. 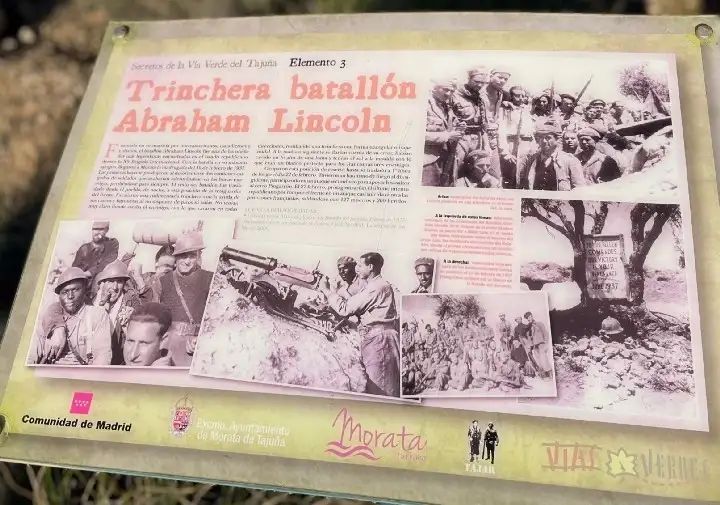 Placard honoring the Abraham Lincoln Brigade’s service in the Battle of Jarama in February, 1937 which blocked the Franco troops from overrunning Madrid for two years. On the far left is a photo of Oliver Law, a labor organizer and communist who was the first Black American to lead an integrated military force in the history of the U.S. The placard is one of the memorials off the main track that can be found in the Jarama Valley east of Madrid. Author photo from a tour of the battlefield in December.

When the Republic, in faint hope of persuading the Western nations to help, sent the last Brigade fighters home, they were honored with a march in Barcelona in October, 1938, cheered by 300,000 Spaniards. Legendary Communist leader Dolores Ibarruri, “La Passionara,” praised them: “You can go proudly. You are history. You are legend. You are the heroic example of democracy’s solidarity and universality.” Her words now are imprinted on a monument to the Brigades at the University of Madrid. 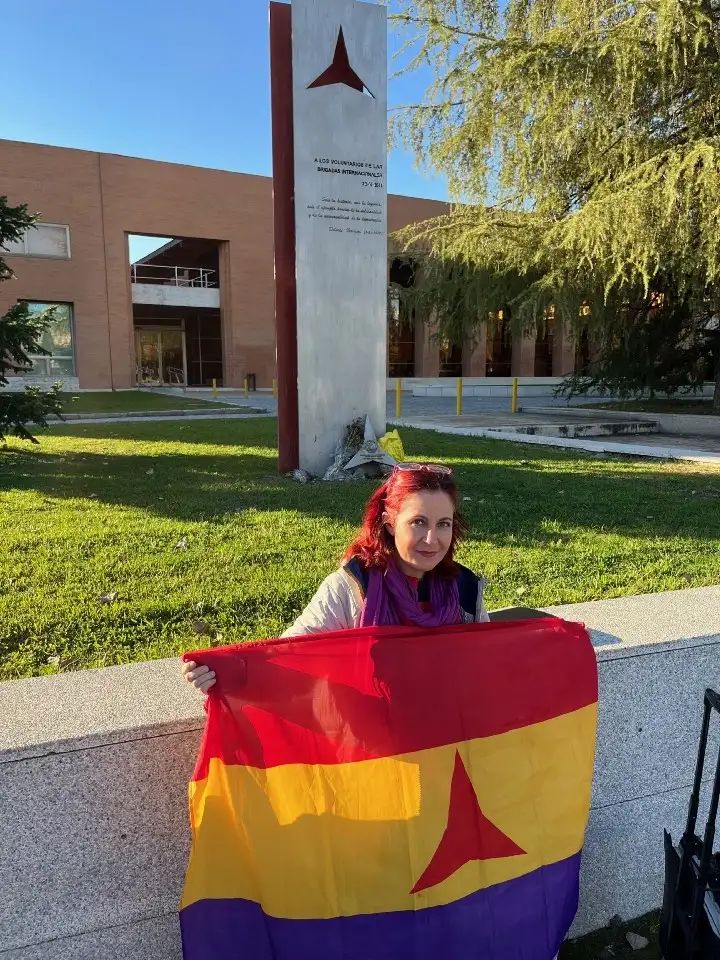 Dr. Almudena Cros of the Asociación de Amigos de las Brigadas Internacionales (AABI) — (Association of the Friends of the International Brigades) in front of the only monument in Madrid to the International Brigades, supported by the work of the AABI. Dr. Cros holds the flag of the Brigades with the red symbol of the Popular Front. Photo by author during an AABI tour in Madrid in December.

The war was horrifically bloody. Franco’s army conducted massacres — deliberate policy to inflict terrorism on the population — on every plot of land it occupied of anyone suspected of not supporting its military takeover. The murder death toll was at least 100,000 with executions continuing for years after the war. Unsanctioned killings, in smaller numbers, also occurred in Republican held areas.

At the war’s end in April, 1939, many surviving Republic fighters who escaped to southern France faced a further calamity following the fall of France, often ending up in Nazi concentration camps or handed back to Franco for execution. Survivors of the camps who ultimately returned home were hardly viewed as heroes. 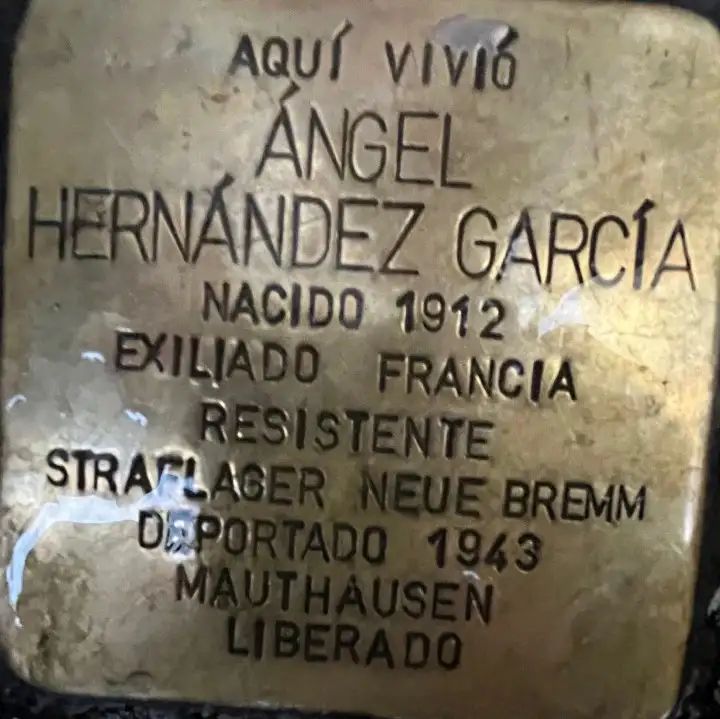 Inconspicuous honorific stones, found in the ground in front of the homes of Republican fighters, like this one in Madrid, who ended up in Nazi concentration camps but lived to return to Spain. Called Stolpersteines, there are some 120 in Spain, along with similar commemorations to victims of Nazi persecution across Europe. Author photo

Brigade veterans were hardly welcomed even in the countries that were at war with Hitler. In the U.S. Lincoln Brigade veterans were branded “pre-mature anti-fascists,” hounded by the FBI, employers, and landlords. Even those who volunteered to fight in World War II were viewed with suspicion and mostly shunted to remote military bases.

Franco maintained his repressive dictatorship until 1975, intent on destroying any vestige of liberalism, women’s rights that were won under the Republic, outlawing leftist opposition parties and trade unions, and restoring the Church’s domination of cultural life and education.

Even after Franco’s death, a future Socialist Party government, “fully aware of the sensibilities of a military caste brought up in the anti-democratic hatreds of Francoism,” Preston writes, contributed to a pacto del olvido, or pact to forget, “a collective agreement of the great majority of the Spanish people to renounce any settling of accounts.” A notably different attitude than seen in Argentina, for example, which after its infamous 10 year dictatorship was overturned in 1983, held a civil trial of the coup leaders, with several receiving life sentences.

Though there has been some ebbing in Spain — notably in 2019 a Socialist government had Franco’s remains removed from an ostentatious mausoleum he had constructed — there are still few signs or public memorials to those who fought for democracy. Those that can be found, such as the monument to the International Brigades on the campus of the University of Madrid, site of a major battle early in the war in with Brigade volunteers helped stem a Franco advance, is frequently targeted by right wing vandalism.

The push in Spain, a concession to the right, to hide the reality of its history should be a warning in the U.S. — especially as we’ve seen far right states like Florida now engaging in censorship of the real history of this country, banning of books, and harassment and intimidation of educators. 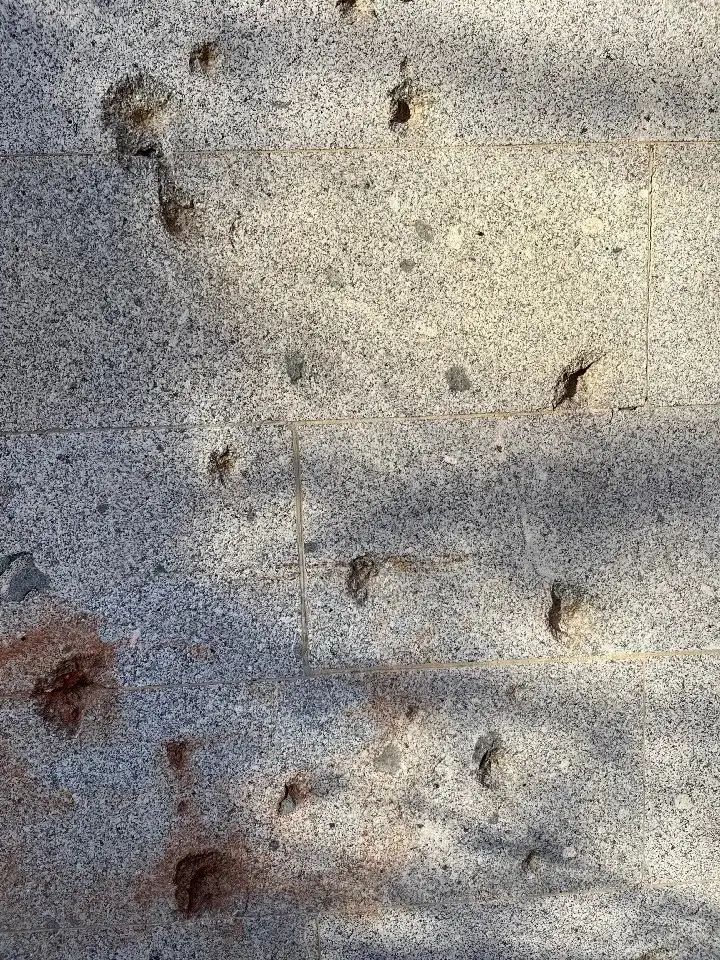 Bullet holes still visible on the walls of a medical faculty building on the University of Madrid campus. Author photo

Speaking in London at a 2013 gathering honoring the British Brigade volunteers, Dr. Almudena Cros of the Asociación de Amigos de las Brigadas Internacionales (AABI) — (Association of the Friends of the International Brigades), warned of an effort to have the University monument removed. “This is where it should be. This is where many of the generous Brigadeers gave their all to defend us against fascism. We want to inspire the youth of today. This is the example of what your generation gave to our people. They can try to uproot the monument. They will not uproot the memories and the brave example that they gave us is with us.” 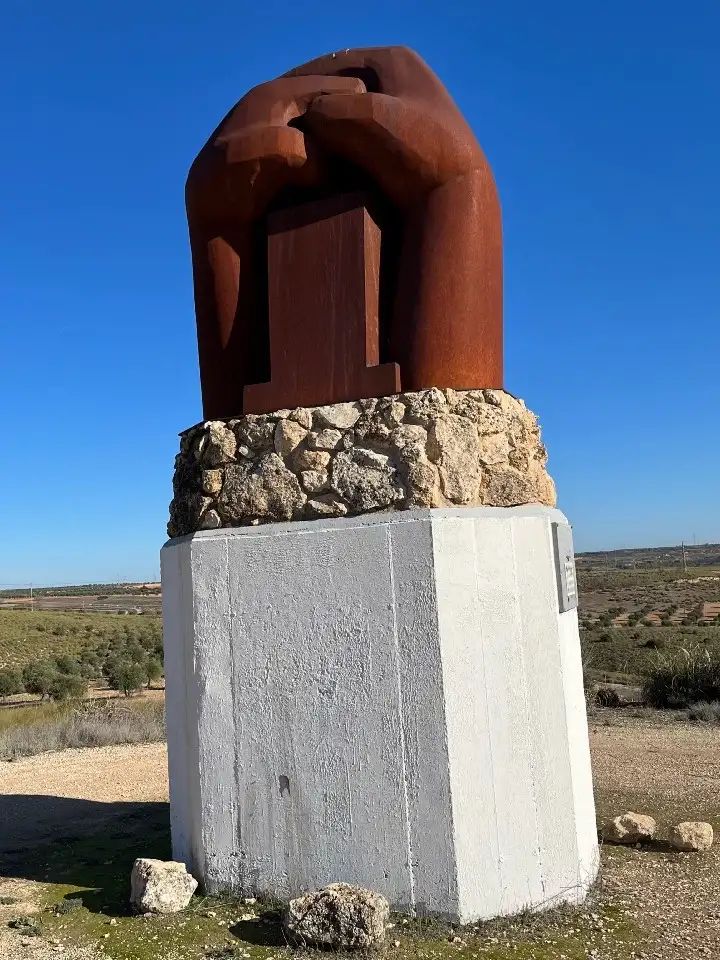 If the U.S., Britain and France had aided the Republic would it have stymied Hitler and prevented World War II? Probably not given Hitler’s obsessive, expansionist dreams. But Spain was a critical training ground for Hitler who was able to enter the wider war months later with an experienced modern military, in a way the Allies did not.

Further, a victory in Spain would have deprived Germany’s military as Hochschild notes, “a source of strategic raw materials for weapons production… important submarine bases, and… troops” Spain provided for Hitler’s war effort.

Finally, it would have saved Spain from much of the monstrosity of slaughter during the war and the brutality of 36 years of Franco’s dictatorship. And it’s an essential reminder of why international solidarity in resistance to fascism matters.

My family was privileged to be hosted on a visit to the Jarama battlefield, a phenomenal museum nearby in Morata de Tajuna and war sites in Madrid by the Across Madrid tours. Highly recommended, you can find them here.

A Short History of the Spanish Civil War. By Julian Casanova.

Spain in Our Hearts. By Adam Hochschild.

Medium. A living network of curious minds. Anyone can write on Medium. Thought-leaders, journalists, experts, and individuals with unique perspectives share their thinking here. You’ll find pieces by independent writers from around the globe, stories we feature and leading authors, and smart takes on our own suite of blogs and publications.Get unlimited access to everything on Medium. Plans starting at less than $1/week. Cancel anytime.