Lechmere: The Employer's "Right" to Keep Employees Isolated and Uninformed 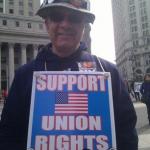 There was a time when slaves and indentured servants in America were owned and rented. Slavery was eventually abolished by the 13th amendment to the Constitution, and in 1935, the National Labor Relations Act (NLRA) gave workers rights to join together to bargain about their working conditions. But what if an employer could block its employees from hearing about the advantages of collective bargaining?

The 1991 Lechmere case allowed employers to do just that by judicially amending the NLRA to make it impossible for employees to learn about the advantages of joining a union.

Lechmere was the anchor store and part owner of a strip mall located within the Greater Hartford, Connecticut area. Lechmere had roughly 200 employees. Members of the United Food and Commercial Workers Union (UFCW) were interested in talking with Lechmere employees about joining the UFCW. Cynics will say that "union bosses" just want more members so they can collect more dues. Those cynics are correct that money is an issue, but they misunderstand the many ways that money matters to unions and union members and the ways that unions and money matter to our quality of life.

Long experience has shown that employers will compete based on price, and the easiest way to compete on price is to cut wages and benefits. When employees are powerless and desperate enough, they will agree to work for nothing.

A current example is student "interns" who are so desperate for jobs that they will agree to take an "experience-only job." In many cases, these "internships" violate federal law and the students who take these jobs know that they are being taken advantage of. However, the students are so worried about not getting a good recommendation from their "employer" that they will not report what they know is unfair and, most likely, a violation of the law.

The result is that employers can use interns to undercut competitors. Of course, those competitors will also hire interns, leading to working conditions that spiral down. In recent years, foreign students who have paid to come to the United States for a cultural experience endured even worse, including being kept in slave-like conditions.

The most important thing unions do is stabilize our economy by taking wages out of competition, and the only way unions can do that is to organize workers across competing employers so that employees can discuss their working conditions and then use that information and the power of numbers to push for better working conditions.

Under most workplace laws. the person who is protected is an employee, and most workplace laws define "employee" as the employee of an employer. However, that definition is not sufficient to protect employees' NLRA rights. In 1935, when the NLRA was enacted, Congress decided that the NLRA could only be effective if it defined and protected employees on a class basis. That is why the NLRA defines "employee" as "any employee" and is not limited to employees of a particular employer. In other words, an employee who talks with people working for another employer about their working conditions is protected by the NLRA.

But in the Lechmere case, the Supreme Court rejected the clear language of the NLRA and Congress' intent by judicially amending the NLRA to limit the definition of employee to "an employee of an employer." In doing so, the court gave greater weight to the employer's property rights, which are nowhere mentioned in the NLRA, than to the clearly protected rights of the employees to join together.

Congress in Section 1 says that we have inequality of bargaining power between employees and employers when employees do not have full freedom of association with other employees.

Congress enacted the NLRA to fix the problems of poverty, economic insecurity, and inequality by encouraging collective bargaining and by protecting workers' freedom to associate with other employees, to organize, to freely choose their own representatives to negotiate their terms and conditions of employment, and to give mutual aid or protection to other employees.

Lechmere's Response to the Union

Even before an organizing drive had begun, Lechmere had taken steps to keep union organizers out. Lechmere strictly enforced its no-solicitation policy by evicting groups such as the American Automobile Association, the Salvation Army and the Girl Scouts. Why did Lechmere go to such extremes that it was willing to alienate these important and popular groups?

Lechmere worried that if it discriminated against only union organizers, it would violate the NLRA. The challenge, however, was that Lechmere and the other stores wanted to attract as many people as possible to the mall. Lechmere was also aware that its parking lot area reserved for employees gave the UFCW a place and time to talk with Lechmere employees about unions and working conditions before and after the employees started work.

Lechmere took the position that the union organizers were not using the parking lot as customers, so they must be trespassers with no right to be on the shopping center's property and no right to talk with the employees on Lechmere's property about joining the UFCW.

Lechmere's manager called the police in to evict the UFCW "trespassers." As a result, all the world could be on Lechmere's property except those whose purpose for being there was to talk about unions. The Salvation Army, Girl Scouts and American Automobile Association were collaterally damaged by Lechmere's extreme anti-union views.

Before the Lechmere case, the National Labor Relations Board (NLRB) had crafted a test that balanced employer property rights with employee NLRA rights. Because the NLRB is an expert agency created by Congress to establish standards and policies, the courts of appeals, including the Supreme Court, are required to defer to the NLRB's decisions.

But the Lechmere majority of Justices Thomas (in his first decision), Rehnquist, O'Connor, Scalia, Kennedy and Souter refused to defer to the NLRB's expertise. Instead, the majority took the position that an employer's property rights trumped its employees' NLRA rights and that a union could have access to an employer's property only under rare and extreme conditions. This was the case, the majority said, even where the employer opened up its property to virtually everyone else.

In reaching this decision, the Supreme Court ignored basic processes of judicial reasoning and the NLRA's clear language that defined employees on a class basis. The Lechmere majority also judicially amended the NLRA to define employees as limited to employees of an employer.

So, for all you wage slaves out there, ask yourself, "Who owns you?" The correct answer, according to Lechmere, is that your employer owns you, and if you notice that you are paid less, with fewer benefits and less job security, now you know why.

Ellen Dannin is the author of Taking Back the Workers Law - How to Fight the Assault on Labor Rights (Cornell University Press).
Ann C. Hodges is professor of law at the University of Richmond, where she teaches and writes in the areas of labor and employment law. Prior to joining the faculty, she practiced labor and employment law in Chicago and worked for the National Labor Relations Board as a field examiner.