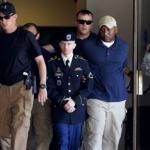 Bradley Manning will be sentenced today, having been found guilty of 20 counts on Tuesday, including espionage (despite the lack of evidence for intent to spy and the lack of evidence that his leaking ever did any real harm). Whatever one thinks of Manning's actions, that we deserved to know some of what he revealed and that his revelations changed the world are undeniable.
1. Manning revealed the Collateral Murder video of a helicopter attack in Iraq on mostly unarmed non-combatants (though some of those struck may have been armed), including two Reuters journalists, whose cameras were taken for weapons, and children. The army maintains that the video does not show wrongdoing, but the killing of unarmed journalists is a war crime, and the callousness of video gives an idea of what was going on in Iraq during the years of the US occupation. When the Bush administration asked the Iraqi parliament for permission to keep a base in the country, the parliamentarians said, absolutely not. The US military was forced to withdraw from Iraq by Dec. 31, 2011.
2. Manning revealed the full extent of the corruption of Tunisian dictator Zine El Abidin Ben Ali, adding fuel to the youth protest movement of late 2010, which translated the relevant US cables into Arabic. Manning contributed to the outbreak of powerful youth movements demanding more democratic governance in the Arab world.
3. Manning revealed to the US and Yemeni publics the secret drone war that Washington was waging in that country. That the cables show then dictator Ali Abdallah Saleh acquiescing in the US strikes on his country probably played into the movement to remove him as president, which succeeded in early 2012.
4. He revealed that then Secretary of State Hillary Clinton ordered US diplomats to spy on their United Nations counterparts. The UN spy requests included cables that "demanded detailed intelligence on the UN leadership including forensic detail about their communications systems, including passwords and personal encryption keys," foreshadowing later revelations of extensive US spying on even allies like Germany via the NSA.
5. His leaks show that then Senator John Kerry pressed Israel to be open to returning the Golan Heights to Syria as part of a peace negotiation. This item suggests that Kerry might be more of an honest broker in the current negotiations than some observers give him credit for.
6. Revealed that Afghanistan government corruption is "overwhelming". This degree of corruption, which has shaken the whole banking system and caused US funds to be massively misused, is still a factor in our decision of whether to stay in Afghanistan in some capacity after December 2014. The US public is in a better position to judge the issue with these documents available.
7. Manning revealed the degree of authoritarianism and corruption of the Egyptian government of Hosni Mubarak, which was subsequently swept away.
8. Manning revealed that hard-nosed realist, former Secretary of Defense Robert Gates, was against striking Iran's nuclear enrichment facilities because it would only slow their program down slightly, but would inevitably cause Iranians to be angry and mobilized in the aftermath.
9. Manning revealed that the Israeli authorities had a secret plan to keep the Palestinian population of Gaza on the brink of food insecurity and poor health, in among the creepiest military operations in history: "Israeli officials have confirmed to Embassy officials on multiple occasions that they intend to keep the Gazan economy functioning at the lowest level possible consistent with avoiding a humanitarian crisis."
10. Manning's act of courage encouraged hackers to leak the emails of Bashar al-Assad and his wife, showing their jewelry buys in Europe and gilded style of life while al-Assad's artillery was pounding Homs and other cities with no regard for the lives of noncombatants. In fact, Manning inspired numerous leakers, including some who blew the whistle on PLO corruption and willingness to give away most of Jerusalem to Israel, and, likely, Edward Snowden, who revealed to us that our government has us all under surveillance.
[Juan Cole is Richard P. Mitchell Collegiate Professor of History at the University of Michigan. For three decades, he has sought to put the relationship of the West and the Muslim world in historical context. His most recent book is Engaging the Muslim World (Palgrave Macmillan, March, 2009) and he also recently authored Napoleon's Egypt: Invading the Middle East (Palgrave Macmillan, 2007). He has been a regular guest on PBS's Lehrer News Hour, and has also appeared on ABC Nightly News, Nightline, the Today Show, Charlie Rose, Anderson Cooper 360, Countdown with Keith Olbermann, Rachel Maddow, the Colbert Report, Democracy Now! and many others. He has given many radio and press interviews. He has written widely about Egypt, Iran, Iraq, and South Asia. He has commented extensively on al-Qaeda and the Taliban, the Iraq War, the politics of Pakistan and Afghanistan, and Iranian domestic struggles and foreign affairs. He has a regular column at Truthdig. He continues to study and write about contemporary Islamic movements, whether mainstream or radical, whether Sunni and Salafi or Shi`ite. Cole commands Arabic, Persian and Urdu and reads some Turkish, knows both Middle Eastern and South Asian Islam. He lived in various parts of the Muslim world for nearly 10 years, and continues to travel widely there. A bibliography of his writings may be found here. ]
Source URL: https://portside.org/2013-08-01/top-ten-ways-bradley-manning-changed-world