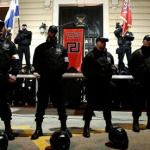 Thousands of Greeks took to the streets of Athens on Friday to protest against a violent attack on Communist party members by black-shirted supporters of the neo-Nazi Golden Dawn party which left nine people in hospital with serious injuries.

In what was described as a murderous attack – and the most serious violence since the extremist group was elected to the country's parliament last year – about 50 men wielding crowbars and bats set upon leftists as they distributed posters in a working-class district of the capital late on Thursday.

In a statement KKE, the Communist party of Greece, said: "The way in which they acted and the weapons employed … are evidence of the murderous nature of the attack. Among the Golden Dawners, some of whom had covered their faces or wore helmets or [party] shirts, were their leaders, well-known fascists and thugs."

With the Communist party preparing to stage a youth festival in the coming days, Thursday's midnight assault comes amid mounting fears that the far right is trying to cultivate an atmosphere of civil war in Greece. Prominent members of the virulently anti-immigrant Golden Dawn have openly predicted that the debt-stricken country is heading towards civil war.

Dimitris Psarras, a writer who has chronicled Golden Dawn's rise over almost four decades since the collapse of military rule, said: "Their agenda, clearly, is to create a climate of civil war, a divide where people have to choose between leftists and rightists."

Psarras argues the attack in the dock-side district of Perama – a Communist stronghold where Golden Dawn has made considerable inroads in recent years on the back of anger over austerity measures – was indicative of that strategy.

"It was very well organised and the most serious incident yet," he told the Guardian. "They are no longer only targeting immigrants in the middle of the night. They are deliberately increasing tensions, expanding their agenda of hate, by going for leftists."

Earlier this year, the Muslim Association of Greece received a letter bearing the insignia of the group and an implicit threat that its members would be "slaughtered like chickens" unless they left the country. Marking the anniversary of the September 11 attacks this week, the party posted a vehemently antisemitic diatribe on its website denouncing "world Zionism [as] the architect of global terrorism".

Greece, whose political faultlines were entrenched by a bloody civil war in the wake of brutal Nazi occupation, is mired in a sixth year of recession that has seen poverty and unemployment soar as it navigates its worst crisis in modern times.

Recent opinion polls have shown that no other party has managed to capitalise on the growing levels of desperation and despair as effectively as Golden Dawn.

Surveys released by the pollsters Public Issue and Pulse in recent days confirmed that the extremists – who recently blasted people attending a "Greeks only" food handout with the official anthem of Nazi Germany – were the nation's fastest growing group and, at 13% and 15% respectively, its third biggest political force.

The main opposition party, the radical left Syriza, topped the ratings with 29% of support, marginally ahead of prime minister Antonis Samaras's centre-right New Democracy party. Many worry that Golden Dawn, which won 18 seats with almost 7% of the vote last June, will further boost its share of votes when local elections are held next year.

According to analysts, Thursday's attack demonstrates Golden Dawn's growing self-confidence and ability to spread its appeal. They point to the inroads the party is making into middle-class neighbourhoods of Athens.

With prominent clerics also voicing support for the group, commentators have begun to ask whether the ruling conservatives should join forces with Golden Dawn, whose views on issues of public order are strikingly similar.

"It is a particularly worrying turn of events that we should now have a debate suggesting that Golden Dawn be brought in from the cold," Psarras said. "Talk that it should end its isolation and link up with New Democracy is dangerous at a time when Greece is going from bad to worse."

Leftists rallying near the spot where the attack took place called on authorities on Friday to "finally take action" and "erase" the fascist group.