Detroit Emergency Manager Created Black Out To 'Teach A Lesson' 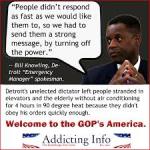 There was a blackout in Detroit, Michigan on September 11th this year, but the reason for it seems to depend on who you ask.

"If you ever had any doubt that Michigan has been taken over by a group of dangerous, radical extremists, what happened in Detroit on September 11th, 2013 should be enough to wake you up. There were several things significant about September 11th, 2013. Not only was it the anniversary of the 9-11 attacks on the World Trade Center, but the state of Michigan was also experiencing an unseasonal heat wave. In the city of Detroit, power outages left people stranded in elevators, trapped four hours in the blistering heat. Hundreds were evacuated from buildings in the downtown area, traffic lights did not function, public transportation was disabled and 1,400 sites across the city were without power. Wayne State University and other key buildings still remained closed, the following day. All of this after the city’s power supply supposedly failed.

The Frank Murphy Hall of Justice, a twelve story building that conducts the city’s criminal proceedings was shut down and the building was evacuated. Earlier in the week, a prisoner had stabbed a Wayne County Deputy, before fleeing from the building. A manhunt followed, with authorities searching for the escaped prisoner for several long hours, before finally apprehending him as he was trying to flee the city. In light of this, the power outage on September 11th created a tense and dangerous situation for officers, justice workers and visitors to the building. The problem is that the city’s power supply never failed.

On September 12th, 2013, Bill Nowling casually stated that the city’s power outages were intentional. Officials and citizens working in the city were given no warning before the electricity was cut off. Law enforcement officials working in the Hall of Justice had no time to prepare. Senior citizens and disabled citizens using elevators in the city’s downtown district had no way to know what was coming. The entire criminal justice system was shut down without notice. Wayne State University Campus was just one of many sites evacuated under emergency conditions. Traffic lights across the city stopped working. 1,400 public and private locations were left without power. And the entire thing was intentional, to “send a message” to the people of Detroit. Bill Nowling works in the office of Kevin Orr, Detroit’s Emergency Manager.

Many people believe that the deliberate power outage was carried out because Orr’s office has been pushing for the privatization of the city’s power supply. The video shows Gary Brown laughing about the power outage. After saying that he deliberately took power away from the city, causing chaos in the process, of course, the need for privatization of electricity in the city is stressed. "

The following day, Erika Erickson with Detroit's WJBK followed up with Gary Brown amid outrage over not only his statements, but also his laughter during the interview about the power outage. Brown attempted to defend his actions by saying that if he hadn't made the call to shut down power, that DTE would have.

However when called to verify, DTE offcials say that simply isn't true; they supply the power, they don't choose where the power goes.

As for injuries caused by the power outage, Assistant Prosecuting Attorney Sharon Grier said that "Someone was injured. I know of her personally. She was injured, in extreme pain because of this."

Kevin Orr, Detroit’s Emergency Manager, was appointed by GOP Governor Rick Snyder to replace all of the city’s elected officials under the state’s “Emergency Manager Law,” and is the sole authority over the city of Detroit. He answers to no-one except the Governor. He is not elected and cannot be fired, as is also noted by Addicting Info.

But wait, this all sounds so familiar...

"One Enron employee tells a colleague in another recorded conversation, "I'm just trying to be an honest camper so I only go to jail once."

"Well, there you go. At least in only one country," the other replies, and laughs.

"Yeah, [expletive], this isn't a joke," the first employee says.

Earlier tapes obtained during the Enron-Snohomish lawsuit indicated Enron had manipulated the Western power grid for a year and a half.

Those tapes include traders gloating profanely about overcharging "Grandma Millie" in California."

I don't know if what the emergency manager's office did when they shut down the power was a crime. In a perfect world, it would be a crime, and someone would actually go to jail. Preferably a jail without air conditioning, or cable tv and situated on the banks of the Detroit River, next to the Koch Brother's piles of petcoke.

We need to keep working towards 2014 so that we can send a strong message of our own by taking out the trash on election day, and taking back our state from the dark overlords who seek to destroy it.