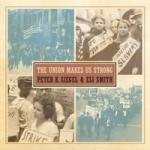 The Union Makes Us Strong by Peter K. Siegel and Eli Smith is a wonderful collection of old favorites, enlivened by some fancy banjo, fiddle and mandolin work and by the sweet harmony of the two singers. We may never hear more stirring versions of "Join the Union Tonight" by John Handcox, the forgotten organizer of sharecroppers or "Scissor Bill," one of the less known Joe Hill tunes. The strongest on the CD may be Hill's famed satirical "Casey Jones," along with the Wobblies' "There is Power in the Union" and the labor anthem of Kentucky's 1930s battles, "Which Side Are You On."

The artists themselves come with heavy credentials. To his considerable credit, Eli Smith recorded the first "old time" album that Folkways did for twenty years, with a backup that Bob Dylan's manager once described as the best string band in the country. John Cohen, Smith's mentor, was the founder of the New Lost City Ramblers, that storied revival group that in the late 1950s did so much to kick off the great folk song revival. Siegel, for his part, has recorded with the likes of Doc Watson and Hazel Dickens. As the liner notes (more properly, liner-pamphlet, a small pamphlet of twenty pages) by Cliff Conner notes, the songs basically document labor's tunes in the first half of the twentieth century.

For the most part if not entirely, The Union Makes Us Strong also bears the stamp of a kind of folky fundamentalism, and there hangs a tale. My own folksong mentor in high school years was famed labor folklorist Archie Green, serving out his sentence as professor (but also father of the campus Folksong Club at the University of Illinois) before an early retirement that sent him on to Washington,D.C., as a one-man lobby for what he called "labor lore." Archie would have loved almost all this album, and why? Because he abominated almost every development in folk music after about 1937. The Almanacs, Pete Seeger, even Woody Guthrie and above all Paul Robeson, not to mention Joan Baez and Bob Dylan - these Archie viewed with a mixture of hostility and alarm.

The real complaint was with the Popular Front stylization of rural music, of course. Anyone listening closely would know that long before 1950, the nature of the audience had changed as it expanded. For most of us listeners, the change was neither bad nor good, just a change, and in many ways, the Joan Baez type was (still is) an "entry drug" for young listeners in particular to become interested in deeper folky stuff. Perhaps the change in tastes might also be taken as a reminder that even the original folkies needed paying audiences, and even old Wobblies were known to mix in vaudeville tunes and other eclectic source material, willy-nilly.

The Union Makes Us Strong takes us back, and that's not at all a bad thing. There's a purity of sound here that is moving, along with a professionalism and delivers the goods.

[Paul Buhle is a retired labor historian living in Madison, Wisconsin. His most recent works cover the Wisconsin uprising (It Started in Wisconsin) or renew his longtime interests (Marxism in the U.S., 3rd edition), but mostly he edits comic art, including forthcoming comics Radical Jesus and Bohemians.]

The Union Makes Us Strong available at: