Vietnamese general behind victories over French and US dies aged 102 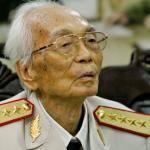 Vo Nguyen Giap, the celebrated general who masterminded the defeat of the French military at Dien Bien Phu and led North Vietnam's forces against the US, has died aged 102 at a military hospital in Hanoi.

Giap, whose victory at Dien Bien Phu triggered France's departure from Indo-China, was a self-taught leader regarded as one of the great military geniuses of the post-second world war era.

He remained as the commander of the North's forces supporting the Viet Cong throughout the subsequent Vietnam war, being credited with the 1968 Tet offensive.

Giap, known as the Red Napoleon, was a national hero whose reputation was second only to that of Ho Chi Minh.

While some, such as the American journalist Stanley Karnow, regarded him as a strategist in the mould of Wellington, others, including the US general William Westmorland, believed his success was down to his ruthlessness.

Indeed, Westmorland complained to Karnow: "Any American commander who took the same vast losses as General Giap would have been sacked overnight."

Giap was born in the village of An Xa on 25 August 1911 and attended the University of Hanoi, gaining degrees in politics and law, before working as a journalist.

It was his command of Viet Minh forces during the eight-week battle of Dien Bien Phu, which raged from March to May in 1954, that made his reputation.

Vietnamese forces, who wore sandals made of car tyres and lugged their artillery piece by piece over mountains, managed to encircle and crush the French troops in a bloody engagement immortalised in Bernard Fall's Hell in a Very Small Place.

Although he was at first a renowned exponent of guerilla tactics, Giap commanded a devastating conventional assault at Dien Bien Phu, in which his forces used Chinese-supplied artillery to prevent effective resupply by air of the base deep in the hills of north-western Vietnam.

During the bitter fighting that would follow, the garrison, comprising a series of outposts in a deep valley, gradually succumbed.

On the brink of being overrun by Giap's forces, the French commander, Christian de Castries, was forbidden to surrender in an infamous order from his superior, General René Cogny in Hanoi, who told him: "You will fight to the end. It is out of the question to run up the white flag after your heroic resistance."

The unlikely victory, which is still studied at military schools, led not only to Vietnam's independence but hastened the collapse of colonialism across Indochina and beyond.

Giap went on to defeat the US-backed South Vietnam government in April 1975, reuniting a country that had been split into communist and non-communist states. He regularly accepted heavy combat losses to achieve his goals.

"No other wars for national liberation were as fierce or caused as many losses as this war," Giap told the Associated Press in 2005 in one of his last-known interviews with foreign media on the eve of the 30th anniversary of the fall of Saigon, the former South Vietnamese capital.

"But we still fought because for Vietnam, nothing is more precious than independence and freedom," he said, repeating a famous quote by Ho Chi Minh.

In later life Giap served as deputy premier and minister of defence.

Peter Beaumont writes on foreign affairs for the Guardian and Observer. He has reported extensively from conflict zones including Africa, the Balkans and the Middle East, and has reported widely on human rights issues and the impact of conflict on civilians. The winner of the George Orwell Prize for his reports from Iraq he is the author of The Secret Life of War: Journeys Through Modern Conflict