The Interstate of the Future: Privatization or Innovation? 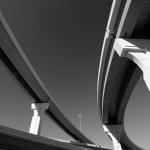 It could be said that Robert Poole, the Searle Freedom Trust Transportation fellow and director of transportation policy at the Libertarian Reason Foundation, has never seen a toll road - or, more precisely, a privatized toll road - he didn't like. Exhibit A: his newly released Interstate 2.0: Modernizing the Interstate Highway System via Toll Finance.

Poole calls his project "Interstate 2.0" to signal that Reason's agenda is something that cool, leaning-forward folks will want to support. But the bottom line is that Poole's proposal offers nothing innovative: just another proposition for the kind of relentless privatization that has stricken cities across the country, rolled into a highway-long package.

Ken Orski's highly influential Innovation Briefs for September 17, 2013, reviews the challenges Poole's proposal faces and then sums up the next steps Poole must take to see his proposal bear fruit:

So, we hope that Mr. Poole's study will be brought not just to the attention of the Beltway audience and the toll-advocacy community where it will predictably meet with plaudits, but, more importantly, to the attention of governors, state DOTs and state legislators. Their collective judgment will be decisive in whether Congress votes in favor of lifting the current legislative restriction against Interstate tolling or leaves it in place. A presentation at the upcoming AASHTO annual conference on October 17-22, followed by presentations at the next annual conferences of the National Governors Association and the National Conference of State Legislatures (NCSL) would be a good way to start the dialogue.

Orski sounds pessimistic, but Poole, a founder of the Reason Foundation, is not without powerful allies that include a Who's Who of conservatives. They include the Koch family foundations and the Olin, Scaife and Bradley Foundations.

Poole's case for rebuilding the interstate and funding it through electronic tolling combined with privatization is essentially a TINA (There is No Alternative). He posits that our Interstate system is crumbling and overburdened and fuel taxes don't yield enough to pay for new highway construction (as they have in the past). Therefore, Poole says, construction of a new interstate should be financed through electronic tolling - and, to minimize the danger of risks, recruiting the cooperation of "private partners" is the way to go.

However, the Reason report and its cheerleaders ignore the heavy downsides to infrastructure privatization, which have been playing out in cities across the country - high costs for individuals, public anger, secrecy, entrenched corporate control. The report also ignores the fact that we live in a changing transportation world: one in which an increasing numbers of cars and trucks driving increasing numbers of miles do not make up the preordained future.

The Insidious Tradition of Public-Private Partnerships

Existing US highway privatization contracts run for 50 to 99 years, making predictions of highway use - and revenues - a challenge. In addition, traffic projections, which translate into tolls paid, have been notoriously unreliable, even in contracts' first years. Traffic predictions, which tend to be about 25 percent on the high side, mean that projects get built but then fail to bring in the revenue that was forecast.

In addition, infrastructure privatization contracts are full of "gotcha" provisions to ensure private contractors make money. The Chicago parking meter deal is an example. The cost to the public of building Reason's Interstate 2.0 would include far more than tolls. It will include lost public control and reimbursing private "partners" for lost anticipated earnings. Public anger over privatization contract terms has led contractors to refuse the public to see the contracts, essentially repealing Freedom of Information Act rights.

As problems with infrastructure privatization have come to light, the deals have been "rebranded" partnerships, such as public-private partnerships. "Rebranding 3.0" claims that these new deals are simply agreements as to which party bears what level of risk.

Nice try, but the reality of infrastructure privatization is unequal power and information. In public-private partnerships, the public is usually a first-time, "one-shot" player and must turn to industry insiders for advice. The insiders have strong incentives to stick with the standard industry contract, no matter which side of the table they are on in each deal.

On the other side of the table are private contractors who are repeat players and know these deals inside and out. (More on repeat players and one-shot players in general can be found here. http://marcgalanter.net/documents/papers/whythehavescomeoutahead.pdf ) Not only that, but industry insiders who advise the public "partner" are paid a "success fee" only if a privatization deal is consummated. What is the likelihood that the public's "adviser" would explain just how these deals work?

To get a handle on the nature of these deals, one can "profitably" turn to the Ferengis of "Star Trek: Deep Space 9" and their Rules of Acquisition, such as FRA 62, "The Riskier the Road, the Greater the Profit," FRA 74, "Knowledge Equals Profit," and FRA 8, which warns that "Small Print Leads to Large Risk."

The False Premises of Interstate 2.0

Claiming that these deals are priced based on risk allocation is akin to calling new roads on old roadbeds "Interstate 2.0." Reason's proposal actually seems more like version 0.75 in its treatment of the interstates as a closed system, unconnected to non-interstate roads, planes, and trains, and in its lack of concern for problems whose solutions call for less traffic, such as environmental degradation, air pollution, climate change and injuries and deaths caused by interstate accidents.

Who benefits from Reason's proposal? Many sectors do. Highway construction companies want the work. Unions that represent their employees want their members to have the work. Financiers connected with highway privatization want the projects to be funded. And people want to get from point A to point B.

However, there are alternatives to privatization and to more truck and car traffic. Rather than turn public infrastructure over to private contractors, bonds can be sold to raise funding for repairs and improvements. This old-fashioned way to pay for infrastructure leaves the public in control of our roads and our futures.

Although it will be years before trains and mass transit are sufficiently up to speed to meet transportation needs, transit also is enmeshed in other infrastructure decisions, in particular, housing and work locations. How can we integrate these factors to achieve our many needs?

Our large country, with its variations of topography and climate, calls for a multimodal approach to transportation. Rather than a closed interstate system that exacerbates climate change, environmental degradation and the loss of community, many are finding smart ways to tackle these problems.

In fact, had the Democrats not lost their House majority in the 2010 elections and, in particular, had Congressman James Oberstar, then chairman of the House Transportation and Infrastructure Committee and an issues expert on transportation, not lost his seat, we might be farther down this path. On the eve of the election, Oberstar was shepherding the Surface Transportation Authorization Act of 2009 through Congress. Among its innovations were intermodal and multimodal transportation systems (Section 1201, Page 180) and the creation of an Office of Public Benefit (Section 1204, Page 728) to provide expert advice to local and state governments on transportation issues.

Those ideas are still around, and people in many parts of the country are creating and dreaming of their own intermodal and multimodal systems.

For example, Philip Longman, senior research fellow at the New America Foundation, has written thoughtfully on transportation. In Back on Tracks - A Nineteenth-century Technology Could Be the Solution to Our Twenty-first-century Problems, Longman says,

Virginia transportation officials have settled on an innovative solution: use state money to get freight off the highway and onto rails. As it happens, running parallel to I-81 through the Shenandoah Valley and across the Piedmont are two mostly single-track rail lines belonging to the Norfolk Southern Railroad. Known as the Crescent Corridor, these lines have seen a resurgence of trains carrying containers, just like most of the trucks on I-81 do. ...

The railroad estimates that with an additional $2 billion in infrastructure investment, it could divert a million trucks off the road, which is currently carrying just under five million. State officials are thinking even bigger: a study sponsored by the Virginia DOT finds that a cumulative investment over ten to twelve years of less than $8 billion would divert 30 percent of the growing truck traffic on I-81 to rail. That would be far more bang for the state's buck than the $11 billion it would take to add more lanes to the highway, especially since it would bring many other public benefits, from reduced highway accidents and lower repair costs to enormous improvements in fuel efficiency and pollution reduction. Today, a single train can move as many containers as 280 trucks while using one-third as much energy - and that's before any improvements to rail infrastructure.

In addition, citizens' groups, such as the Northern Colorado Commuter Rail - NCCR project, are making the case for local multimodal transportation systems.

It is ironic that Reason's "2.0" proposal is such a poor fit with current realities. PIRG studies have shown that people are driving less, with those ages 16-34 driving 23 percent less. Millennials are leading the decline, a trend that can be found in almost all states and does not seem to be tied to the effects of the Great Recession.

At the same time, there has been an upsurge of interest in multimodal transportation and just-in-time access to cars, including through informal arrangements, such as peer-to-peer car sharing.

These changed attitudes to private automobile transportation can be part of the solution to mounting problems we face today, including air pollution, climate change, obesity and ills created by impermeable surfaces, which lead to polluted runoff and flooding.

Similar programs exist in Minnesota and New York City and in the Federal Highway Administration.

These Streets are Made for ...

Much more could be said about the current ferment around streets and roads, but the ongoing New York City World Class Streets - Remaking New York City's Public Realm deserves mention. This project has taken a careful look at New York City streets - what they are and what they can be - to enhance people's well-being and lives. Among other things, the project has interrogated street after street, block after block, asking what else can be done with public spaces, including streets, to make them more attractive, more likely to promote public physical and psychic health and more enjoyable. A major underpinning of the project has been to think of the people within the city as having multidimensional needs. Achieving these results has required paying close attention to physical spaces and how they affect the people who inhabit them.

The facts show that, across the country, we are engaged in a public and community-by-community discussion that is inclusive and fact-based. It is a movement that will get us, as a people, where we need to go. You, reading, this paragraph, take a few moments now to think about how we can get where we need to go, along with a pleasant walk on New York's Highline.