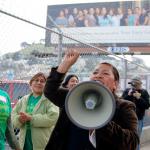 Domestic workers have had some breakthrough wins over the past two weeks. Up until then, these workers were excluded from protections such as a guaranteed minimum wage, paid breaks, and overtime pay. On September 17, the Obama administration announced new rules extending the Fair Labor Standards Act to include the 800,000 to 2 million home health workers—who help seniors and others with self-care tasks like taking medications, bathing, and shopping—under the federal government's wage and hour protections.

Next, California governor Jerry Brown signed into law the Domestic Workers' Bill of Rights on September 26, allowing the full spectrum of domestic workers—including live-in nannies and housekeepers—to benefit from the same gains as the home health workers.

For the first time ever, these employees will be guaranteed the federal minimum wage and will earn overtime pay. And their victories have implications for a much larger portion of the workforce, including independent contractors, nontraditional employees, and those on temporary assignments. The domestic employees' wins are helping to chart a path forward for the growing number of employees who work outside conventional office settings.

Much of the credit for these historic wins is due to the tenacious organizing of the National Domestic Workers Alliance, a group of workers in this field who advocate for their own rights. Led since 2010 by the dynamic young organizer Ai-Jen Poo, the NDWA has grown from a single chapter in New York City to a nationwide organization with campaigns for domestic workers' rights in 19 cities and 11 states.

Here are five lessons that the wider progressive community can draw from the victories.

1. Local struggles can have national impact.
Before the creation of the National Domestic Workers Alliance, the New York-based organization Domestic Workers United started by organizing locally. After winning passage of the Domestic Workers' Bill of Rights in New York state, the group took their campaign on the road. The alliance won a second state-level victory in Hawaii, and then began organizing nationally with the message that those who care for elders and people with disabilities deserve respect. (It helped that this message was already reverberating across the globe after the International Labor Organization ratified its Convention on Domestic Workers in 2011.)

Having campaigns at the local, state, and national levels gave the NDWA the flexibility to focus where victory was most likely. Massachusetts is likely to be their next state-level target, Poo told Nation columnist and YES! Magazine Local Economies Reporting Fellow Laura Flanders.

2. Crunch your own numbers.
Rather than defensively responding to reports by business groups and state agencies, the NDWA created its own, from-the-ground-up reports and analyses on the working conditions domestic employees face in America.

Developing the capacity to contribute to the research around domestic work allowed the alliance to set the terms of debate. Other groups can use the same technique to frame the public agenda--whether around city planning, state budget priorities, or federal reforms.

3. Put working people front and center.
The NDWA used Caring Across Generations to shine the spotlight on caregivers—who are often only seen publicly pushing a client in a wheelchair—and to show how much they do for their clients.

When Ai-Jen Poo appeared in cable news shows and magazine articles, she constantly pointed to the stories of domestic employees and thus kept the spotlight fixed on them. Putting real people's stories forward as the basis for the campaign's argument created public sympathy and understanding.

4. Find allies beyond the usual ones.
Although groups that hire home care employees could be seen as "the enemy," the NDWA partnered enthusiastically with them. In New York and California, for instance, the alliance worked with Hand in Hand, a national association of caregiver employers who were willing to take a stand on behalf of their employees' right to fair pay and labor conditions. Hand in Hand's website even offers a toolkit for employers, with guidance on how to become a better employer.

Employers like Hand in Hand join the campaign not out of an impulse to charity, but because they know that fair national standards for home-care employees helps ensure better care for their loved ones. As Ai-Jen Poo said recently in a video for the PBS series Makers: "When it comes to human dignity, there is no such thing as an unlikely ally."

Another way that the NDWA cultivated alliances was through the careful coalition-building that went into forming Caring Across Generations, a campaign that seeks to ensure that seniors receive the heath care they need from workers who receive a living wage. Launched in 2011, the coalition's unusually broad range of member groups includes organized labor, seniors, faith-based groups, women's rights organizations, and anti-poverty groups.

The different members have come together around a unifying vision for improving the lives of those who serve our youth and our elders. By joining across different organizing traditions and constituencies, they created a far-reaching effort that goes beyond the typical single-issue campaign.

5. Victory begets more victory.
Small victories can be an effective motivator on the road to bigger ones. By stringing together a series of international, national, and local victories—none of them complete in themselves—the NDWA showed that change is possible and created momentum for ever-greater wins. And the NDWA's campaign for a Domestic Workers' Bill of Rights is still moving forward, with active drives in Massachusetts, Connecticut, Washington, Illinois, and Oregon.

The NDWA's record of steadily organizing with their eyes on a clear prize of policy solutions, recognition, and respect should serve as an inspiration. The movement's relevance isn't just the fact that they are winning; how they fight matters, too. Any movement that can transform adversarial employee-employer relations into a unified force for public policy change is worth learning from.

Amy B. Dean wrote this article for YES! Magazine, a national, nonprofit media project that fuses powerful ideas and practical actions. Amy is a fellow of The Century Foundation and principal of ABD Ventures, an organizational development consulting firm that works to develop new and innovative organizing strategies for social change organizations. Dean is co-author, with David Reynolds, of A New New Deal: How Regional Activism Will Reshape the American Labor Movement. You can follow Amy on twitter @amybdean, or she can be reached via www.amybdean.com.