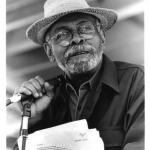 The terrorists have been here a long time. The ones who took the slaves

The ones who ran and underbossed

the plantations. Especially those

who made money from them. They still at it.

They never stopped. These old guard terrorists. And

they still at it. Still terrorizing.

When slavery was sposed to be ended, they thought up the Klan

The Knights of the white Camelia!

When we was sposed to get reparations

They got Andrew Johnson

to stop it.  Every time we take a step

They ain't never gone no where

But you take a step forward

and we paid for it

with the four little girls. Blown up in Birmingham. Before that

we won the bus boycott

been with us hundreds of years. DuBois

called it The Sisyphus Syndrome. You push the rock up the mountain

The terrorists appear and try to roll it back down.

Now Obama get in defeating

Cain's son, the one in the bible

live in Arizona where they shot that congresswoman

in the head, and now wanna ban Latino studies

these is them Terrorists. Still terrorizing.

He come back a hero terrorist. Terrorist

We get clear enough to elect Obama

the terrorists take off they Klan clothes

put on some suits , they the t party, now. TEA

The Evil Assholes, they terrorists & Nazi's

like always. They do anything to stop America's getting rid of it's craziness.

They never let all of us

be Americans. They terrorists

And the Republicans they even got negroes

Real Public Coons, they terrorists too

Citizens United , they terrorists, hurt us worse than

What Al Queada can't do the Republicans can

Been doing it in one costume or another

for hundreds of years

Now they so frustrated, they Racist Addiction

coming down on them, Boehner's nose running,

had a crying jag in Congress, , or the other nut, Ryan

trying to stop you from sending your kids to college

He's a real mullah for sure

Terrorists took over congress, listen to them

absolute nuts . What the Taliban can't do

they are doing, close down

the United States government.! Now who

would do that? Think about it. What

the Taliban and Al Quaeda couldn't do. Terrorists in the congress

locked down the govt because

the black dude there , just as they would in the 19th century

when a blood wanted to vote. We facing the sickness

of terrorists. Been terrorizing all of us

for hundreds of years. When we gonna catch em

and lock `em up! These terrorists. Catch em

and lock `em up! Then we can cure ourselves,

America, of what has always

[The dramatist, novelist and poet, Amiri Baraka is one of the most respected and widely published African-American writers. With the beginning of Black Civil Rights Movements during the sixties, Baraka explored the anger of African-Americans and used his writings as a weapon against racism. Also, he advocated scientific socialism with his revolutionary inclined poems and aimed at creating aesthetic through them.
Amiri Baraka's writing career spans over nearly fifty years and has mostly focused on the subjects of Black Liberation and White Racism. Today, a number of well known poems, short stories, plays and commentaries on society, music and literature are associated with his name. A few of the famous ones include, `The Music: Reflection on Jazz and Blues', `The Book of Monk' and `New Music, New Poetry' among others.]

[Thanks to the author for sending this poem to Portside.]