Hostage Taking, the Sequester and the New Ransom Note 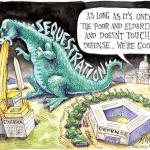 It’s more than irritating to hear liberal media commentators – and even some a little further to the left – try to minimize the impact of the sequester. Yes, it’s true that Obama Administration operatives did their best to magnify the possible negative effects of the cuts in government spending. That was the whole idea. The aim was to frighten the public and the Congress thereby creating the atmosphere for a “grand bargain” along the lines of the “Simpson-Bowles” scheme. True, the country’s economy didn’t collapse and we didn’t run out of weapons needed to fight wars halfway around the globe, but sequestration is not benign.

The Congressional Budget Office has suggested that keeping the cuts in place could result in the loss of as many as 800,000 jobs. So far, the sequester has cut needy children off from pre-school, tens of thousands of low income people have been denied rental payment assistance, cancer patients have been denied treatment and the court system undermined. “The absurdity of continuing these failed policies should be clear,” wrote Michael Linden at the Center for American Prospect last week.

But the policies do continue and if they are still intact when the New Year begins, things are going to get a whole lot worse.

The Congressional action last week that brought the suspended government back on tract was important. The assault from the far right was staved off and its attempt to extract a pound of flesh by taking the government hostage was, for the moment, frustrated. But it was not the victory some people are trying to make it out to be.

“Because the deal only includes minor concessions, the Beltway consensus is that it represents a resounding defeat for Republicans, who ‘surrendered’ their original demands to defund or delay Obamacare,” observed The Nation editorially last week. “In the skirmish of opinion polls, that may be true, for now. But in the war of ideas, the Senate deal is but a stalemate, one made almost entirely on conservative terms. The GOP now goes into budget talks with sequestration as the new baseline, primed to demand longer-term cuts in Medicare, Medicaid and Social Security. And they still hold the gun of a US default to the nation’s head in the next debt ceiling showdown.”

“Surrender? Any more ‘victories’ like this and Democrats will end up paying tribute into the GOP’s coffers,” said the magazine.

The attempt to take the nation’s politics hostage is still underway. Only the wording of the ransom note has changed.

Congressional Republicans “misjudged their leaders,” Conservative columnist, George Will, told Fox News last Sunday. “The fact is they have extraordinary leverage,” he said. “We are now talking entirely in Republican terms, in Republican vocabulary after this so-called defeat. No taxes, how much is the spending going to be cut? The federal workforce is being cut, discretionary domestic spending is being cut and this is all because of the much reviled [Senate GOP leader] Mitch McConnell getting basically on his own, the sequester two years ago.”

Under the terms of the agreement reached last week, a bi-partisan Congressional committee will now recommend even more spending cuts with a deadline of December 13 for action by early next year. What will now be debated are proposals for massive reductions in spending for Social Security and Medicare. Hanging over the talks will be the threat, once again, of refusal to raise the debt ceiling beyond February 7.

Having for now given up on using the budget process to eviscerate the Affordable Care Act (aka Obamacare), the Republicans appear to be united in their demand for “entitlement reform.” “For their part, Republicans say they’re willing to give up the harmful cuts known as sequestration – and only those cuts – in return for Social Security and Medicare benefit reductions,” wrote Richard Eskow, a fellow at the Campaign for America’s Future last week. “Their defense-contractor patrons would be amply rewarded in return for sacrifices from America’s seniors and disabled.”

The drive continues to deal with the effects of capitalism’s latest crisis by making seniors and retirees make do with less while corporate profits continue to rise and economic inequality continues to expand. But it can’t be emphasized enough that this drive is, indeed, “bipartisan” with the elements of the Democratic Party eagerly joining in the assault on Social Security and Medicare. Call it “Simpson-Bowles,” or “Fix the Debt” or any number of other euphemisms, some of the wealthiest people in the country have mobilized their resources to see that this happens.

For defenders of senior retiree and disability benefits there are simply no encouraging words coming out of the White House. President Obama continues to speak of achieving a “balanced approach to a responsible budget” and saying things like: “The challenges we have right now are not short-term deficits; it’s the long-term obligations that we have around things like Medicare and Social Security.”

As could be expected, the false equivalency propagandists have gone into action. Last week the New York Times carried a front page feature on how “special interests lobbyists” have flown into action to try and sway the Congressional negotiators. The list of these evil doers included the tea party aligned groups and the AARP. That’s right; the absurd argument is being made that complicating the effort to reach a reasonable budget compromise are the folks who want to undermine or eliminate Social Security and Medicare on the one hand and the 40 million-member organization of seniors trying to preserve the programs on the other.

As economist, Mark Weisbrot, pointed out last week, public opinion sampling indicates that most people in the country “decidedly don’t want any cuts in social security, Medicare, or the social safety net in general, in order to strike a ‘grand bargain’ with the Republicans.” He went on to ask, “How is it that our Democratic president, whose opponents have been utterly defeated in their efforts to prevent Congress from raising the debt ceiling, now feels that he has to negotiate with them over a purely fictional problem?” Instead, wrote Weisbrot, the White House “should be taking up the legitimate concerns of not only his own base, but the majority of Americans whose real income has stagnated or fallen for the past 30 years – not to mention (and they are, in fact, not often mentioned) the 46 million Americans, which is close to one in sixth, who live below the poverty line.”

Noting the vast sums the so-called reformers have at their disposal, economist, Robert Reich, has written, “Still, the majority is holding its own for now, despite its under-representation in the public debate. President Obama will have to think twice about any grand bargain with the Republicans that harms senior citizens. As Obamacare takes effect and millions benefit from it, right-wing arguments about the role of government will sustain further losses. Eventually, the country will move on to the real, non-fictional, and serious issues of employment and income inequality.”

Speaking October 21, before a conference of the International Foundation of Employee Benefit Plans, AFL-CIO President, Richard Trumka, said he had a “sinking feeling that too many politicians are ready to put the hurt on regular working people,” adding that the people in Washington should be increasing Social Security payments rather than cutting them. “Millions of Americans are afraid Social Security might not be there for them,” Trumka said. “We cannot listen to that fear and believe Social Security is the problem. It isn’t. The fear is. Instead of cutting Social Security, which will make the fear come true, we should, as a nation, invest in Social Security. Increase benefits.”

“The reality is that the economy needs more spending and there is no plausible story where the additional spending is going to come from the private sector in the immediate future,” economist Dean Baker wrote in TruthOut last week. “If the government is not prepared to boost spending then we will continue to see an economy that is down close to 9 million jobs from its trend level.”

Baker continued, “For the next round of negotiations progressives should come up with the wish list of problems that badly need to be fixed in the years ahead. Universal pre-school, as suggested by President Obama is a good one. We can also include a wide variety of infrastructure needs. We can also look to increased support for energy conservation measures. Another injection of subsidies to support retrofitting homes, businesses, and government buildings could go far towards reducing our energy use. And we could help many of the state and local governments that are still struggling and laying off workers.”

Avoiding disaster is turning into President Barack Obama’s abiding role,” Financial Times Washington correspondent, Edward Luce, wrote in the Financial Times October 14. “Top of the list is stopping a sovereign default, which would eclipse any other economic damage Washington could inflict. In today’s climate, even a six-week reprieve on the debt ceiling counts as progress. But the opportunity cost of persisting with this lethally irrelevant debate is huge. The longer the US squabbles over the basic legitimacy of government, the less hope there is of making it relevant for the 21st century.”

“The US is in the throes of an epochal battle over government’s legitimacy,” Luce continued. “The last party to hold the entire system to ransom was the Democrats, in 1860. That led to a bloody civil war that paved the way for modern federal government. The south is still fighting some of its consequences. It is probably no coincidence this latest escalation is taking place under the watch of America’s first black president. Partly as a result, Mr. Obama is on course to leave government in a weaker condition than when he found it. That is not the legacy he sought. Preventing default will not be enough. Mr. Obama needs to make the case for what is essential.”

Essential is preserving and expanding economic security for seniors and people with disabilities, expanding the educational opportunities for the younger generation and doing something to aid the nearly 12 million people unemployed or underemployed.

BlackCommentator.com Editorial Board member and Columnist Carl Bloice is a writer in San Francisco, a member of the National Coordinating Committee of the Committees of Correspondence for Democracy and Socialism and formerly worked for a healthcare union. Bloice is one of the moderators of Portside. Other Carl Bloice writing can be found at leftmargin.wordpress.comleftmargin.wordpress.com.