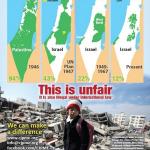 The Toronto Transit Commission (TTC) has rejected a group's bus ad showing Israel's expropriation of Palestinian land over time, claiming the ad could incite anti-Jewish discrimination and violence. The ad, sponsored by Canadians for Justice and Peace in the Middle East (CJPME), is similar to others that have appeared in cities all over North America – including Vancouver. CJPME has said it is ready to appeal the censorship of the ad all the way to Canada's Supreme Court.

The centerpiece is a series of four maps that show the loss of control of Palestinian land to the Zionist movement and Israel between 1946 and the present. The ad also states: “This is unfair. It is also illegal under international law.” It includes an image of a Palestinian schoolgirl standing amid rubble resulting from an Israeli air attack in Gaza. The copy of the ad shown here was provided to The Electronic Intifada by CJPME.

But TTC spokesman Brad Ross said that the transit body did not accept that Israel's confiscation of Palestinian land was either “unfair” or “illegal.”

“Making that statement may cause some ... to then target Israelis and/or Jewish people. Some may view it as discriminatory, [and] could advocate for violence or hatred against Israel or the Jewish people,” Ross told The Toronto Star.

“There is no finding in our legal opinion of illegality around loss of land under international law ... no court, no tribunal has ruled on loss of land being illegal,” Ross added.

B'Nai Brith, one of Canada's most prominent anti-Palestinian organizations, issued a statement “congratulating” TTC for banning the ad. Echoing the language used by the TTC itself, B'Nai Brith claimed that the ad was “misleading and inaccurate and could lead to hatred or violence against supporters of Israel and the Jewish community in particular.”

By conflating criticism of Israel and its policies with criticism of Jews, the TTC seems perhaps unwittingly to be promoting anti-Semitic canards that Jews are collectively responsible for Israel's actions.

B'Nai Brith has a history of censorship and supporting intolerance. Last summer, Canada's leading LGBTQ publication Daily Xtra revealed that B'Nai Brith had teamed up with Charles McVety, one of Canada's most outspoken anti-LGBTQ campaigners, in an effort to persuade the city to defund Toronto Pride. B'Nai Brith was incensed that Toronto Pride had not banned Queers Against Israeli Apartheid from marching in the parade. [See “QuAIA at Pride 2012”]

CJPME has issued an action alert saying that the group “is ready to appeal this decision to the highest levels – including the Supreme Court.” It urged the public to contact the TTC and send a message protesting the ban of the “Disappearing Palestine” ad:

“The ads are both fair and accurate. Israel's building of settlements in the occupied Palestinian territories indeed does clearly violate the Fourth Geneva Convention, the Rome Statute of the International Criminal Court, and UN Security Council Resolution 465 (1980). All of these laws forbid occupying powers, such as Israel, to transfer their civilians to the territories that they militarily occupy. Why are TTC staff denying that this is the case?”

CJPME also alleged that it has faced obstruction and discrmination in trying to place the ads. According to its website, it sent proposed designs of the ads to two transit authorities in June.

“Sadly, through various strategies over the summer, the transit companies and ad agencies have tried to prevent the ads from being posted. Designs were ‘lost,’ employees told to ‘drop the ads,’ emails and calls ignored.”

CJPME said that in September its lawyer “sent a letter to the TTC demanding that the transit authority respect CJPME's constitutional rights to post the ads,” but instead it was notified on 21 October that the ad was rejected.

The TTC's extraordinary finding runs wholly against international law, and even the nominal policies of Canada's extremely pro-Israel Conservative government. It also seems to go far beyond the organization's remit of providing public transport to Toronto.

Numerous UN Security Council Resolutions, including, for example, Resolution 465, state clearly that Israel's annexation and colonization of Palestinian land occupied since 1967 is illegal.

In 2004, the International Court of Justice in the Hague found that the wall Israel has built in the occupied West Bank and its associated regime of land confiscation, is illegal and must be removed.

Moreover, when Israel was established in 1948, it conquered about twice the amount of land allocated to a putative Jewish state under UN resolution 181, a resolution which was never lawfully implemented. The property rights and right of return of Palestinian refugees who were expelled or fled in 1948, and their descendants, have been reaffirmed by overwhelming majorities in the UN General Assembly annually.

The Canadian government states that “Canada does not recognize Israel's unilateral annexation of East Jerusalem.” The government also reaffirms its support for Resolution 465, among others, confirming the illegality of Israeli colonization and settlement.

Recently, more than ninety Canadian writers took a public position against Israel's ongoing evictions of Bedouins from their lands in the south of present-day Israel.

In August, Human Rights Watch called on Israel to halt the forced displacement of Bedouins which is carried out “based on discriminatory laws and rules, and without respect for the Bedouins’ dignity or the country's human rights obligations.”

These are facts, but they are ones Toronto's transit authorities do not want riders to know. •

Ali Abunimah is author of One Country: A Bold-Proposal to End the Israeli-Palestinian Impasse and co-founder of The Electronic Intifada, where this article first appeared.