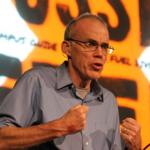 Nearly 500 progressive activists gathered Monday night at the Sheraton Station Square across the Monongahela River from downtown Pittsburgh where climate change activist Bill McKibben was presented with the Envronmental Award from the Thomas Merton Center.

The Pittsburgh Councilmember Bill Peduto, who was elected mayor the following day, greeted the group and noted that Pittsburgh was the first city on the globe to ban fracking. He read a Pittsburgh City Council resolution declaring November 4, 2013 "Bill McKibben Day."

McKibben stopped in Pittsburgh on the way home from a six day six city organizing trip in Europe. He said the global movement to stop climate change is mushrooming. His organization 350.org has coordinated over 2,000 demonstrations across the globe involving millions. He emphasized that Americans are key to stopping global warming since we have the leverage.

He traced the arc of his climate activism to the present confrontation with the carbon based extraction industry and its financiers. He emphasized that confrontation with global energy corporations is the order of the day. The key link is the financial underpinning of their activity through investment. He said that when Mandela visited the US after his liberation he first went to California to thank the activists on campuses who had forced the university system to divest from businesses in South Africa. He urged Pittsburgh to join the rapidly growing divestment movement in the US. As this Pittsburgh Post Gazette article on the event points out divestment organization is active at 380 universities, several religious denominations, and more than a dozen cities. McKibben said the divestment movement will weaken the "rogue" energy companies.

McKibben noted that the civil disobedience against the Keystone XL pipeline was the biggest in many decades. He noted that protest had delayed the Obama administration's decision on the pipeline and that if the pipeline is vetoed it would be an important step to reopening global talks on climate change.

McKibben emphasized that shutting down Keystone alone is too little too late and that more vigorous action is needed. The one degree rise in Earth's temperature has resulted in near destruction of the Arctic ice cap, a 30% increase in ocean acidity and a 2% increase in atmospheric moisture content. These changes are already having serious effects on weather, population stability, and plant and animal extinction. At this point, even with drastic action starting immediately an additional one degree warming cannot be avoided. The consequences will be increasingly severe.

Action on divestment needs to broaden and deepen quickly in order to prevent exceeding the additional one degree warming that is already inevitable. McKibben pointed out that globally, the climate movement is overwhelmingly people of color under the age of 21. In the US the movement must stop the energy corporations from searching for carbon, digging it up, and burning it. The current reserves that are immediately available for burning will raise the Earth's temperature by another estimated four to five degrees centigrade, an unthinkable occurrence. Activists at universities, churches, unions, pension funds need to join the divestment movement.