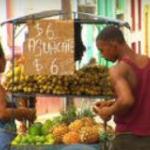 HAVANA, Cuba -- Two years ago, an ad-hoc wholesale produce market appeared on the outskirts of Havana. Vehicles of every size and shape from old American flatbeds to heavy-wheeled Russian hulks would converge at nightfall on an often muddy field where they jockeyed for position.

Driver and helper would then proceed to sell onions, pineapples, papayas and lettuce from the backs of their trucks to a varied clientele. Pushcart vendors, vegetable stand dealers, and  restaurant and cafeteria owners would jostle their way through the crowd looking for the best deal and then haul away their purchases by wheelbarrow, bicycle and car. More than a few carried sacks of fresh produce over their shoulders.

Fast forward to December 2013; in the days before Christmas, both produce sellers and buyers got an early present: a brand new wholesale market venue, El Trigal, also on the outskirts of the capital.

Gone are the muddy field, lettuce wilting under the sun and sacks of rice soaked by a sudden downpour.

From now on, business would be conducted in an enormous, well-lit terminal run by ten men in bright red tee-shirts with the word "cooperative" blazoned across the back.

El Trigal market is not just a new form of commercializing agricultural products. The market itself is something new to have emerged from the economic reforms being rolled out by President Raul Castro. It's one of a still limited number of non-agricultural cooperatives approved by the government that previously controlled all food distribution.

"This is providing a solution to the problem that farmers have been complaining about, that when their harvests surpassed the amount contracted by the government they didn't have anywhere to market the excess, to sell wholesale," Claudio Sabron, one of the cooperative members told CBS News just three nights after the market opened its doors.

Sabron and his nine equal partners, each of whom invested 1,200 Cuban pesos to whip the building into shape, buy equipment and set the operation in motion, also hope that it will become a profitable source of income for their families.

The cooperative leases the premises from the State that retains ownership of the property; but the workers run it, pay operating costs and taxes and keep the profits. Sabron lists the cooperative's basic expenses as including rent for the premises, taxes, electricity, wages for three contracted workers to help run the place and fuel for the modern forklift they've leased from the State. But he believes that cost can be reduced by using the lift  and other items efficiently and that at the end of the year profits will be good.

"It will be a good incentive and encourage [us] to work. If a man who is, as I said, putting in 18 hour days, is really compensated for what he has put into this cooperative so that he can see another form, a new form, of earning a living," said Sabron, who thinks that model will make the market successful.

That reasoning is just what the government hopes will come out of relinquishing State control over many establishments that were running at a loss because workers had no interest in whether or not the ventures were profitable.

Just over 200 small to medium-size state businesses running the gamut from restaurants to produce markets to transportation were selected for the experiment that got off the ground this year.

The official view is that cooperatives are a more social form of production that private businesses and therefore will receive preferential treatment with respect to taxes and other fees. The government also is making credits available to cooperatives, credits denied private business owners.

"We had to all contribute money, initial capital for this venture. It's not a straitjacket, that is the working capital that the partners agree to. But we each had to put in the same amount. But the State gives us the facility to ask for a bank credit to complete the necessary capital and get started and then the money we take in will be used to pay off the bank loan. And once we're free of that debt we will recover our initial investment with the profits that we begin to make," Sabron explained.

This might all sound like Economics 101 to Americans. But it's a whole new ball game in Cuba, where for more than half a century the State has had a monopoly on nearly every aspect of the economy right down to shoe repair shops and beauty parlors.

Operating independently of the government and state businesses, the cooperatives, like El Trigal, will lease state property and equipment at ten-year renewable intervals, operate on a market basis and divide profits among members who would then be taxed on their income.

Sabron notes that when CBS visited the market it had only been in operation for three days. So it was hard to evaluate just how much the coop members would earn. But he said they would begin estimating yearly earnings based on the monthly income.

The money will come from various sources. Vendors pay 120 Cuban pesos (CUP) a night for the space where they display and sell their produce. Buyers pay a 3 CUP entrance fee and can rent a large wheeled hand cart for five CUP an hour to haul their purchases from the terminal to where their transport is parked.

The coop can also rent space to licensed private businesses that would provide services to both vendors and buyers. Already lined up are a private cafeteria, restaurant, pizzeria and cane sugar juice stand that will open shortly. Sabron points out that there is also space for a carpenter and other workmen whose services might be needed in the 14 hours that the market is open nightly, from 6 p.m. to 8 a.m. Monday through Friday.

"We won't earn a salary," said Sabron. "It's not a fixed salary because one month I might earn 1,500 CUP and another month it could be up to 2,000 CUP. It will all depend on how much the cooperative takes in after expenses and on how capable the cooperative is in providing services and in reducing costs," he concluded.

The co-op members are hoping to attract a lot of sellers and buyers.

"The market is designed basically for selling wholesale. Everyone can come here. No one is going to ask if buyers have a license to run a business, if they are pushcart vendors or have a vegetable stand. Even public health, sports and educational institutions can shop here. Whoever wants to buy wholesale in bulk quantities can come here," he told CBS News.

Wholesale markets serving the new private sector are still in short supply but the opening of this market is being taken as a positive sign. It both provides farmers with another place to market their produce and represents another step in the State's shedding of responsibilities and giving an opportunity to individuals, in this case in a cooperative, to earn more than they would at a public sector job even if it means working longer hours and working harder.

The crucial element is that the ten members of the cooperative feel they are building something that is theirs and the more successful they make it, the better their lives will be.