Why Socialists Need to Run in Elections, and What They Can Do When They Win 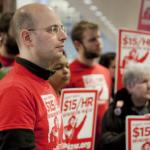 Since Khsama Sawant's victory in Seattle, there is renewed discussion on the left about elections. Some are still rather wary of the idea, and come up with a range of objections.

One point made in a recent post on the North Star blog was that these victories helped to show our power. While not wrong, it passes over a more important point

Does anyone doubt, for example, that Socialist Alternative in Seattle, is now likely several times larger than it was before this race? Or that it has vastly expanded its reach nationwide? Or that it will continue to do so precisely because Sawant's council seat provides her with a wider platform to speak as a `tribune of the people,' at least as she has done thus far in the current Boeing strike?

It's true there is a danger of being transformed in a bad way by such victories. I think it was Lenin (at least repeated by Mao) who referred to parliaments as `yellow dyeing vats', ie, your delegates went in red and came out yellow. Yet the Bolsheviks still made good use of their platform in the Duma, and while Debs never won, his campaigns, and many more at lower levels who did win, helped the growth and scope of the Socialist Party considerably.

Any socialist elected to office has two tasks. One is to be the voice of a prophetic and militant minority, from his or her seat, doing the work of radical agitation and education. The other is to help assemble and lead a progressive majority, a coalition necessarily with those to his or her right, to define and pass legislation meeting the immediate demands or launching the projects of the workers and their allies, or at least blocking against the measures of the most reactionary elements in those bodies. Bernie Sanders is an example of one who does both. He rarely wins everything, but his voice is one the left would do well to make better use of.

Finally, one can be corrupted or co-opted in many ways, not just by electoral or trade union posts. People can be corrupted or co-opted via well-funded NGO groups that have little to do with unions or elections. They can also be corrupted by dire poverty and the lack of resources, as we saw in a number of former revolutionaries (Huey Newton comes to mind) corrupted by the `underground economy.' There is no vaccine or guarantee against this in any arena, save for the political and moral training, solidarity, supervision and discipline one can find in revolutionary organization. Class warfare sees its casualties, but that is no reason not to wage it. It is a reason, however, to be less amateurish and more professional in the process.