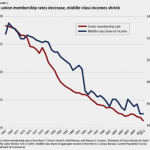 Moderator's Note:  To find the article by Benjamin Sachs that is referenced below ,please go to http://papers.ssrn.com/sol3/papers.cfm?abstract_id=2337561

In recent years, we have seen an explosion in activism around the issue of economic inequality. The frustrations that many low-income people feel at a slow economic recovery and a continued assault on the American welfare state have culminated in a slew of direct action by individuals, labor unions, and other progressive organizations. While the policy outcomes generated from these actions have been mixed, it is undeniable that the issue of poverty and income inequality commands a place in the economic policy discussion that has not been seen since the end of Lyndon B. Johnson's Presidency.

In addition to the concerns about economic inequality, the lack of representational equity for low- to middle-income workers has also been a rallying point. The failure to pass a farm bill has led to the reduction in food assistance that working families receive from the Supplemental Nutrition Assistance Program (SNAP) while the companies that they work for continue to rake in record-setting profits. The same gridlock that has delayed the farm bill's passage would likely delay any policy proposal that could ameliorate the problem of stagnating wages as well. And through all of this, the conversation about revving up the American economy has focused less on solutions that would impact low- and middle-income families and more on things like more tax cuts, which would disproportionately benefit the wealthiest Americans. Attempts by Congress to ameliorate this representational inequality through policies such as campaign finance restrictions have largely been ineffective, as the wealthy and their advocates were able to circumvent the procedure through myriad loopholes (the infamous "social welfare organization" loophole being one of them), culminating in the Citizens United ruling that effectively gutted America's campaign finance regulations.

Benjamin Sachs, a labor law professor at Harvard, correctly attributes representational inequality to the decline of the labor union in America. Labor unions were strongest as arbiters of economic and representational equality, he states, when they had the ability to pressure lawmakers into supporting progressive legislation that leveled the economic playing field. This was done through an organizing apparatus that was able to mobilize workers for direct action on Capitol Hill and turning out on Election Day, as well as building a lobbying apparatus that could effectively push labor's priorities in Congress. Sachs' central argument is that this political power has always been tied up in the collective bargaining of wages and benefits by workers at their respective workplaces. He calls this "a highly contested form of economic organization," meaning that the opposition to a labor union's entry and continued operation at a workplace is always under attack, usually from both external political forces and company management. As anti-union forces became more successful at reducing the ranks of the unionized rank-and-file, the political machine that churned out policy victories for working people slowly began to wither.

Sachs' solution to this problem, and the larger issue of representational inequality, is to decouple the political and economic functions of a labor union, and change labor law to allow employees at a particular workplace to form "political unions." These unions would enjoy the same advantages that have traditional unions have enjoyed in the workplace, namely:

Sachs makes it clear that he proposes the political union not as a replacement for collective bargaining efforts, but rather as a complement. But as I will point out through the course of this piece, the birth of the political union could end up doing just that: replacing hard-won gains in collective bargaining with a toothless form of worker activism.

The author says that the political union would not meet the same sort of managerial opposition that unions engaged in collective bargaining have met (though, as I will explain later, he does not rule out the possibility of continued opposition from outside groups). Unfortunately, it seems that this reduced opposition is largely rooted in the political union being barred from improving conditions in the workplace.

As previously stated, the managerial opposition to collective bargaining is one of the major impediments that labor unions face on any campaign. Tactics used by management to prevent unionization include, but are not limited to: captive-audience meetings, reclassification of employees out of the bargaining unit, terminating employees for minor infractions on their work record, and issuing threats about the future stability of the workplace if workers vote to unionize. Even a purportedly labor-friendly company like Volkswagen, which has received attention for working with the United Auto Workers (UAW) to set up German-style works councils, has paid outside consultants to derail the UAW drive at their Chattanooga, TN plant.

The main reason that is stated for this reduced managerial opposition is that the political union may choose to pursue policy objectives that are not threatening to the employer. But how would this benefit the labor movement, or the workers that they seek to represent? The successful examples of political union organizing that Sachs gives are all in places that have given substantial support to the aims of collective bargaining; what about those places where community support for labor has largely been absent? I have written before on the need to build a culture of unionism in the South so that the labor movement can maximize its organizing potential in a region that has long been hostile to collective bargaining; political unions that are created in the current atmosphere for labor could be disastrous for the movement in regions that have historically resisted collective bargaining. There is even the distinct possibility that political unions could be formed ... to oppose labor unions.

And if the political unions decide to pursue a policy agenda that would, say, include improving benefits and wages on the job? Here is what Sachs has to say about it:

Legislation that has anti-competitive effects, of course, would include things such as prevailing wage statutes, regulation of employer-provided healthcare, and paid sick leave (which Sachs himself cites as an example in the previous paragraph). Pursue those, and earn the opposition of, well, all of those groups that are opposed to labor unions already. In addition to that, Sachs argues that the scale differential between organizing in the collective bargaining and political spheres would diminish the likelihood that a political union would negatively impact a firm's "competitiveness." Add all of this together, and you have a recipe for creating workplace organizations that could potentially vary little from the company unions that dominated American workplaces prior to the National Labor Relations Act.

A final objection to this piece is its implications for worker solidarity, both on the job and in the community. Much like workplaces can have multiple collective bargaining agreements at one worksite, it could be reasonably expected that multiple political unions will take hold as well. At a time where partisan polarization is higher than ever before, this would pose a potentially grave danger to the labor movement. The solidarity that would normally center around workplace and class issues could be redirected towards narrow ideological causes such as gun control or tax cuts. It is difficult to see how a further balkanization of the working class would be a positive step towards remediating representational inequality.

When the labor movement suffers, so too does the ability for workers' voices to be heard. Regenerating the labor movement's ranks will not be easy, but the future of labor organizing is unfolding before our eyes, and it is an amazing thing to witness. At the end of the day, it will be the same old-fashioned method (though facilitated through modern means) that has sustained the labor movement for generations: boots on the ground and building relationships with working-class communities.

My father, whose involvement in the labor movement predates my existence, has always held fast to one axiom: "Any union is better than no union at all." Benjamin Sachs makes a good faith attempt to bridge the representational divide for working families, but I fear that his idea might give my father's creed a strong challenge.