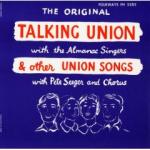 While many people disagree about what their favorite song or lyric by Pete Seeger is, no one disagrees about the profound impact that the folk-singing legend had on the labor movement in the second half of the 20th century.
Seeger marched and performed at hundreds of rallies for different unions over the years.
Henry Foner, who had known Seeger for more than 60 years, remembers one meeting in particular for the hospital workers union, when Seeger brought his banjo and entertained the crowd for hours.
"Pete has always had an interest in the labor movement and has been associated with unions. Whenever there was a problem that a union had, Pete was always available," Foner said.
He should know. Foner was the president of the fur, leather and machine workers union from 1961-88. Seeger participated in a number of his rallies and marches, Foner said.
"There's nobody comparable that I know of that's had the impact that Pete's had," Foner said.
Seeger's involvement in the labor movement began decades ago, when he worked with the Congress of Industrial Organizations in the 1940s, Pietaro said.
In the 1940, Seeger joined with folk legend Woody Guthrie and others to form The Almanac Singers, who recorded songs like "The Talking Union Blues," and traveled around the country, singing at CIO strikes and meetings.
However, in the Communist witch hunt of the 1950s, Seeger's labor views sometimes got him in trouble, as he was accused of being a communist and blacklisted by the United States.
Seeger and his band the Weavers were forced to cancel tour dates and give up their recording contract.
In later years, Seeger worked hard to promote the civil rights movement and the environmental movement, among others, but always found time to work hard for labor.
He still felt strongly about the labor movement.
"We have problems that still need to be solved today, like corporations running the country," Seeger said.
He added that music is the best way to connect people who might otherwise not sit down and work out their problems.
"The main mistake made by unions is people not being willing to talk to people that you strongly disagree with. Not just talk, but communicate, and that's why music might save the world," Seeger said.
Jen Fuentes, coordinator of the Hudson Valley Area Labor Federation, said it is indeed Seeger's music that made him unique in the labor movement.
"These songs are what allowed workers to sustain themselves during times of adversity. He's a legend in the labor movement for his folk music that has spoken to labor struggles through the years," Fuentes said.
Charles Kernaghan, executive director of the Institute for Global Labour and Human Rights, formerly known as the National Labor Committee in Support of Human and Worker Rights, was impressed that Seeger would help out with any labor cause, no matter how big or small.
"Our involvement with Pete has been small but incredibly meaningful. When we asked Pete, he was there," Kernaghan said.
Seeger attended a number of rallies and marches with the National Labor Committee, mostly to protest sweatshop labor around the world.
Kernaghan said that even when Seeger could not attend, he would find a way to make a difference, often sending a contribution or a hand-written letter that never failed to motivate everyone.
"He has left a personal touch even on our small organization," Kernaghan said.
For Pietaro, Seeger's biggest influence is on his own work.
As a labor organizer and field representative for a state workers union, Pietaro spends much of his time talking to his union members and joining them at rallies and strikes.
He always tries to get his members singing at rallies.
Pietaro recalled one rally during a bitterly cold winter day, during which he marched with the transport. It was freezing, but Pietaro played the banjo and sang songs with the workers, even though he could barely feel his fingers.
"People need to reach out to each other and song is one way to do that. That's Pete Seeger," Pietaro said.
While Seeger has had a profound effect on different unions, many believe his most important contribution was how his music made each worker feel.
"He was always in the hearts and minds of the rank and file," Kernaghan said.
Source URL: https://portside.org/2014-01-28/pete-seeger-had-profound-impact-labor-movement