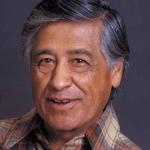 On Monday night, New York City's AMC Empire 25 movie theater lit up brighter than Times Square itself with hope, inspiration, a sense of pride and a feeling of limitless possibilities for Latinos during the premiere of Cesar Chavez, a powerful biopic about the Mexican-American farm worker, labor leader and civil rights activist.

The film, which won the Audience Award at SXSW last week, tells the story of the iconic labor leader's fight to unionize farm workers, the inception of the United Farm Workers of America and highlights their fight for better pay and conditions for the laborers who picked grapes in the fields of California.

Luna's motivation for making the film was to "keep the legacy of Cesar Chavez alive and to make sure every person in this country is aware of their history," he explained.

"Film makes stars and heroes... these are the people who feed us, they should be celebrated and recognized, and they shouldn't struggle so much to feed their own families -- and we can be part of that," added Luna, who spent four and a half years making the film.

At the culmination of the screening, audience members rose to their feet in a standing ovation that seemed to be initiated by actor Tony Plana (Ignacio Suarez of Ugly Betty) who sprang to his feet and appeared to be very moved by the film. The applause paid homage to not only a great film directed by Luna, but to the movement ignited by Chavez, the support of Robert F. Kennedy and the legacy that Kerry Kennedy and her family are carrying on and most importantly, the empowerment of Latinos.

"This movie gives us the opportunity to share my father's life and story with a whole new generation of people," Paul Chavez, the son of the legendary Cesar Chavez, told the Latin Post.

While Paul Chavez recognizes that there are a lot of "folks who knew him and marched with my father," many of the younger generations aren't aware of his work and influence.

"My father passed away 21 years ago in April, and so that means that there's a whole successive generation that was born after his passing, and while they may have heard his name and know a little bit about him, they don't really know what his work is," he explained. "And so this movie will give us the opportunity to introduce him to a whole new generation and successive generations of Americans -- and people throughout the Americas with the Spanish language version that is coming out very soon."

"We're real excited because we think that it helps keep my father's work in front of people, but more importantly, it gives us a way to use his life and work to inspire future generations to go out and work for social change," he added.

Unfortunately, Paul Chavez's mother, Helen Chavez, who recently turned 86, broke her shoulder and was unable to attend the premiere, but she watched the film at home.

So what did she think of it?

When Paul asked his mother for her reaction to the film, "the old Helen Chavez came out," he said. "What did you like about it, Mom?" he asked.

"She was happy," he said. "I think what happened was that she needed a moment to herself, to let it sink in, it wasn't the right time to ask her."

He says, "it's a pretty accurate portrayal of her -- she's a woman of few words, but tough. There's a scene where there is a big debate about should we join the strike or not, and Helen Chavez proudly says, "Are we union, or not?"

"She would cut to the chase; she's a woman who spoke her mind, he added.

America Ferrera, who plays Helen Chavez, met with her to get a better perspective on the relationship she had with Cesar.

"I think they had some girl talk -- there's a couple of scenes where my father was jealous -- and I could see her (Helen Chavez) giggling," he said. "Then there are other scenes where she is just bedrock of support. When I talked about the sacrifice and the relationship with my older brother, her oldest son, she cried.

"We were really happy the way [Ferrera] portrayed my mother. She had a lot of dignity, but with a lot of conviction."

"There is a bit of pressure," said Ferrera about her portrayal of Helen Chavez. "She was such an extraordinary woman and I wanted to do her justice. I have heard that she saw the film and that I got it right."

Rosario Dawson, who plays a labor leader and civil rights activist who co-founded the National Farmworkers Association, which later became the United Farm Workers, was "so dynamic and energetic -- and that's Dolores Huerta," said Paul Chavez.

John Malkovich, who plays a farm owner, made the film "multidimensional. "They have captured all of the characters that are meant to be portrayed in the screenplay," Paul Chavez said.

And what did Paul Chavez think of Michael Peña portraying his father?

"The casting -- they did a great job. They got Michael that shares a lot of my father's physical characteristics," Paul Chavez said.

"I want people to see this movie and understand visually, you don't have to be 6'2, blond hair and have a booming voice to be a powerful person -- you can be a small man, you can be a dark man and you can be humble, and your words can be powerful and motivating, so the casting of Michael fit that bill. My hope is that young Latinos will sit there and say that if someone like Cesar Chavez made a difference, then maybe I can," he said.

The film, which will be screened at the White House on Wednesday, hits theaters March 28, 2014.